WE MAKE SOME CHANGES TO OUR RV TEAM 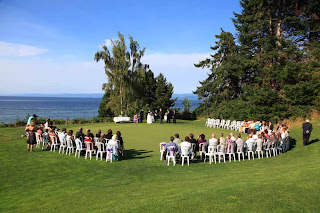 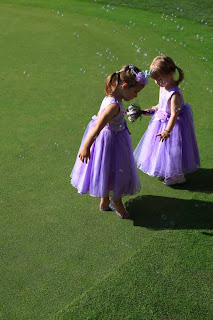 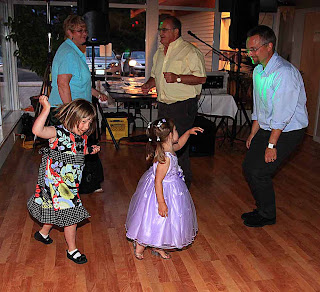 The little kids loved the rock and roll music, our grand daughter Georgia on the left and our son Richard on the right 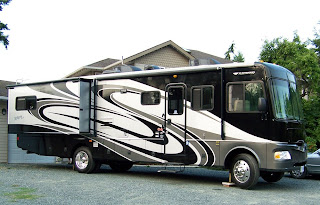 I need to correct a statement I made last post. Technically, as Daryl pointed out in his comment we’re not homeless. However, we are houseless, which is even better!

When we were up at Cluxewe the last time, I was telling our friend Earl about a motor home we were considering at Lantzville but the price was too high. He suggested we buy his sister in law’s which she was eager to sell. When we came back down to Errington, I decided to call and inquire about the details. After a couple of trips up to her house to view the coach, we decided to buy it. It is a 2008 Fleetwood Terra LX 34N with two slide outs powered by a Ford V10 gas engine. The couple made one trip to and a few local trips then he died suddenly on May 21 this year. He was only 67! The motor home only had 11,990 kms on it. We're planning on it lasting us at least 18 more years. We plan on buying a small vehicle to tow behind and will be selling our pickup and Arctic Fox trailer so our days are revolving around those things plus planning how to make the transition to the different style of travelling.

We picked up the motor home after lunch on Saturday and then had to rush over to Qualicum for my niece Katrina’s wedding. The ceremony was held on the golf course overlooking the ocean. It was a very pretty location. Our son Richard and Robin and Georgia were up for the wedding too. The DJ played great dance music, mostly 50’s rock, and the little kids just loved it.

On Sunday morning R,R&G arrived fairly early so we all had breakfast in the house. That is except for Chas who had already eaten. Shortly after we started eating the phone rang. My Mom had fallen again and possibly broken her hip and some ribs. It is just terrible how she has deteriorated in such a short time. Chas picked up our sister Susan and they went down to the hospital. They spent the whole day down there and were not impressed with the care. Mom was transported back to Stanford late afternoon as it was decided she would receive better care there. She has a cracked pelvis for sure but not sure what else. She is in more pain of course, so not good.

I just remembered Monday afternoon that I missed celebrating my third anniversary Sunday. It’s hard to believe three years have passed since I retired! Just before lunch on Monday, Chas got a message from Stanford that Mom wasn’t doing well and they had the doctor coming at 1 PM to see her. My sister Janet and Aileen went down to be there when the doctor arrived. It was determined she also had a bladder infection so they started her on medication for that. The doctor also reduced one of her meds since they were giving her way too much for such a small person. Over medication is a real problem for older folks. That probably isn’t a surprise for most of you.

This morning when I got out of the truck in town, I found a $5 bill just in front. Tonight while taking Mitzy for a walk up the road, I found another $5 bill lying in the grass alongside the road.