THE SUN CAME BACK 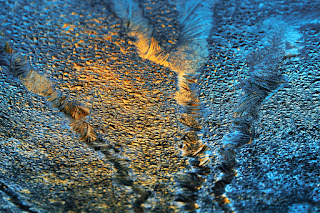 Yes the sun came back but with it are frosty mornings everyday this week.  We did get above 60F today and the wind finally died down also.  This is our car's windshield.  I took the photo from inside and the yellow is the sun shining on the park model across the street.  Don't forget to click on the image to enlarge it. 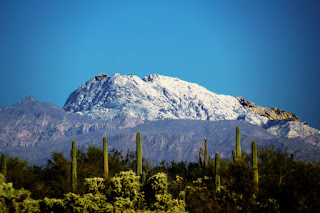 And this would be why we have such icy winds blowing.  This mountain is north of Phoenix and I took the photo from east of Florence on our Monday ride this week. 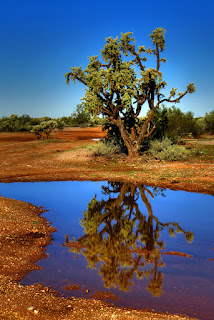 When it rains in this country, water will lay on the surface for days so I was able to get the reflection of this large Cholla Cactus 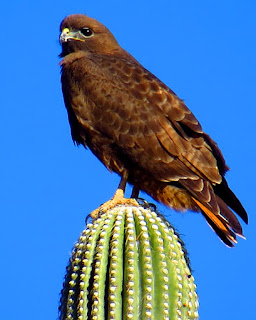 A Red-Tailed Hawk on our Monday ride 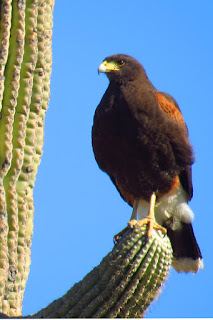 A Harris's Hawk on our Tuesday ride 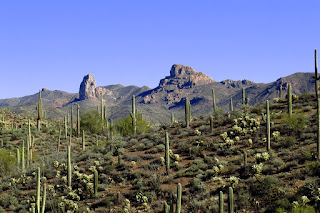 Some of the country we ride through 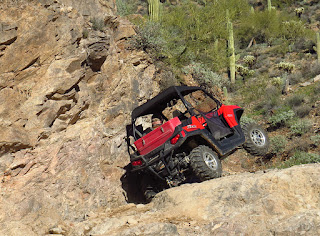 Brian's getting a little air 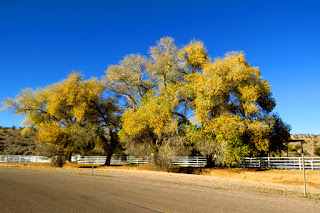 We're getting fall colour in January along Price Rd.  Within a month there will be new green leaves covering the branches 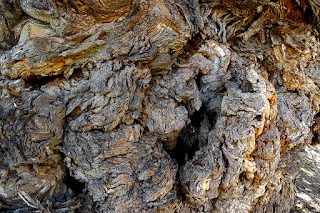 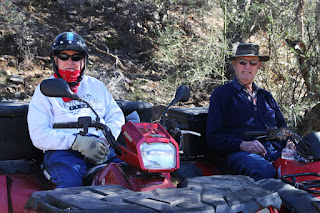 I had the privilege of having two 86 year old riders out on Tuesday.  On the left is Blue , from Ohio, who is the reason there is a Tuesday ride; he started it several years ago so he could  get an extra day of riding in.  Two days a week wasn't enough then and he still rides three days unless he has an appointment.  On the right is Ken from Montana who is two months older than Blue having been born in July.  Ken still drives a semi hauling fertilizer Spring and Fall up in Montana. 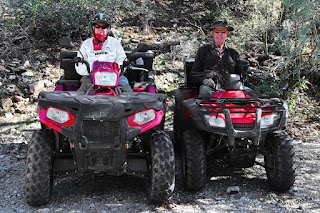 We are making plans to go to Quartzsite some time this month.  Nothing firmed up yet but we intend to leave the car behind again and just tow the RZR behind the motor home.  Several of the club members are planning on joining us for a few days of riding again like we did last year.  No idea how long we will stay over in the Quartzsite area but it could be only two to three weeks this time.  I wasn't planning on taking in the RV show this year as it is pretty much the same old thing every year.  The second bloggerfest is happening on January 23 and I may try to attend that.  We went to the first blogger event last year by making a long day trip from Florence as we had already returned to Caliente and our lot.
One set of our card playing friends are sick so can't play with them but we did play a couple games with Ken and Marie last night.  They let me win both games.  I thought that was nice of them.
I had a busy day on Tuesday.  I led the ATV ride then it was the ATV club potluck supper.  I snuck in with the first group called so I could leave early and attend my first camera club meeting down here over in Anthem, Merrill Ranch.  That was kind of fun to get together with some other photographers again.  I really miss that.  Today I got word of a new camera club hoping to form over in Coolidge next Tuesday night so I hope to make it to that.  I have been trying to get enough energy or something to drive up to Mesa or further to a camera club but it just seems to be too much effort.  I hope at least one of these clubs will work out for me.  And if you are wondering, no I didn't by a Powerball ticket.
Posted by John and Aileen on the road at 6:15 PM