WE ATTENDED OUR FIRST RV RALLY 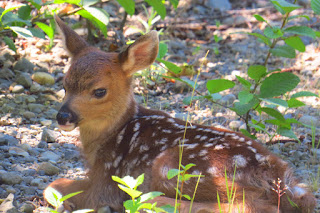 I went on a 97 km ATV ride with the Alberni Valley Hillclimbers last Saturday and at one point we saw these twin fawns. 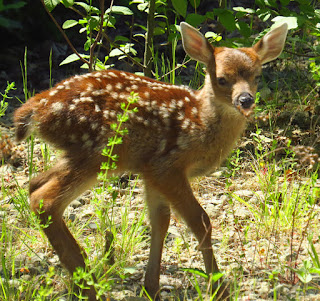 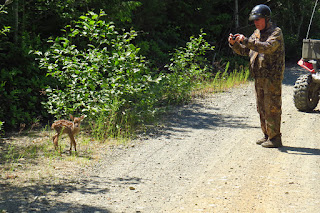 They were not very old and this little guy went up toward Ernie and it looked like he was asking "are you my daddy?" 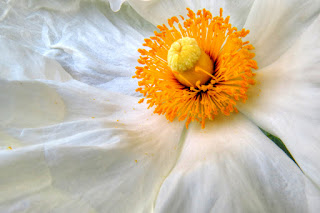 We moved down to Chemainus Gardens RV Park on Monday this week to attend the Vancouver Island Chapter of Escapees RV Club's annual Spring Rally.  We had noticed this rally in the club magazine so we attended their monthly lunch in May to get all the details.  This flower was like a large poppy but it was something else.  I stuck my Canon SX50 camera lens right into the center of the flower to get this result. 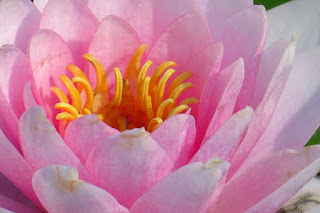 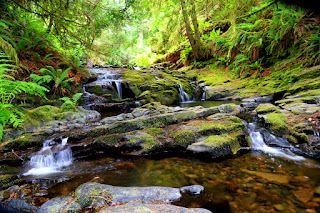 On Wednesday, I took three chapter members for a walk around Stocking Creek Park.  Yesterday I went back with Aileen and Mitzy and took my Canon 6D to make these two shots. 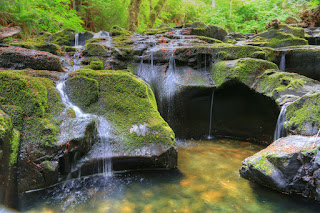 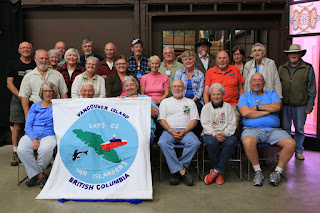 I took this group photo at our wind up supper last night.

We were a little nervous about going to this rally not really knowing anyone but our fears were soon swept away by the friendliness of the whole group.  I was pleased to be able to share by photography skills by taking some photos of the changing executive and the group shot of those who participated and four who just made it for the evening.   I played cards on Monday, Tuesday and Thursday nights until late.  Every night was a new game that I hadn't played although one night was similar to a game I had played years ago.  I did really well on Tuesday, blowing away the competition but the other two nights I believe I was in last place.  Aileen was very happy as she got to sit around a campfire those nights.  On Wednesday, Aileen , new friend Pat and I went to the Chemanius Theater production, Twist and Shout which chronicled the British invasion begun by the Beatles.  the show was exceptionally well done with great singing and music and there were some really good comedy skits slipped in here and there.  We are looking forward to their next rally that begins August 10.
This morning after saying goodbye to all our new friends at the rally, we moved a few more miles down the road to my Cousin Neil's (and Carol's) where will moochdock for the next few days.
Posted by John and Aileen on the road at 3:04 PM