We have almost completed our first week of farm sitting for my brother Charlie and Sheila.  We have kept busy tending and watering the gardens and lawns.  I’ve done some pruning here and there as well. We’ve had a few hot days where we had to run the air conditioner in the motor home and that turned out to a bit of a learning challenge.  Since we have a 50 foot extension on the end of our shore power cord, there is a bit of a power drop.  The air conditioner has three different settings that can be used and it took a while to find the one that works.  The other two setting kept tripping the fuse in the inverter through which all shore power is routed.
It has been really nice to be parked all by ourselves again after being shoehorned in at Cluxewe for the past six weeks.  We enjoyed our time there visiting with John and Anne and being so close to the ocean but, listening to the neighbours' every word got oppressive pretty darn fast.  Aileen drove herself down to Duncan on Sunday as we decided it was too hot to leave the pets and motor home unattended as we didn't want to depend on the air conditioner.
I picked a few wild blackberries (not the big domestic ones that have gone wild, but the little native Douglas Blackberries) out in the bush.  I put them in our pancakes this morning and they were very tasty.  We’re still monitoring the third cow waiting for her to calve.  The other two calved just before we arrived.  This will be her first calf so we hope to be able to spot any trouble before it gets serious.  She keeps going off by herself which is often an indicator that the birth is about to happen but, not yet.
We’ve gone for a couple drives around the area and have been trying to replace our carpet protecting mats in the motor home.  I’ve taken my bike on a few rides around as well.  I have to admit that my cameras have been inactive for the past week or more.  I’m including  some photos from back in my film days which I have dug out of the archive. 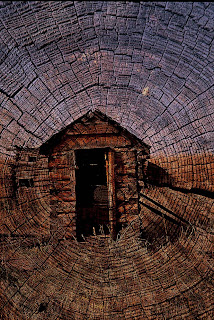 This is another of my log sandwich series from years ago.  The slide of an old outhouse was combined with a slide of the end section of a log in the same slide mount


The Fisgard Lighthouse near Victoria, BC.  I was squatted down as low as I could go with my butt nearly in the ocean to get this angle 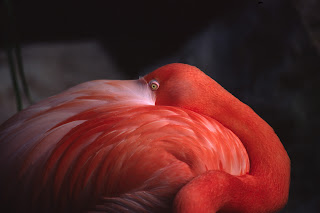 A resting Flamingo taken at Crystal Gardens, a long defunct indoor garden in Victoria, BC

Posted by John and Aileen on the road at 3:18 PM