Boy, this has been a long gap in posting!  We had Aileen’s sister Anne and husband John here again, this time for five nights.  John and I did quite a bit of ATVing mostly combined with geocaching.  We hit the geocaching hard after I joined as a member of the geocaching community.  I logged 43 finds in the first four days.   This geocaching is a good way to get some exercise and find all sorts of trails I never knew existed.  I even went out on my bicycle this afternoon and found five more.
Aileen enjoyed getting more visiting with Anne.  Anne and Aileen did some prowling around the small shops in Parksville and Qualicum Beach.  They accompanied John and me on several geocaching trips as well.
We are still busy with keeping up with the animals, lawns and gardens here.  The gardens are starting to come on strong now so we are mostly eating homegrown meals.  Things will get back to normal next week.  Sheila called this afternoon to say they were back on land from their twelve days on the river up in the Yukon.  They will begin the long drive home tomorrow.   We have kind of moved into the house since it was easier when John and Anne were here and staying in the house.  We now have our granddaughter Georgia staying with us for four nights so her parents could take a mini vacation to Vancouver.
Back on the 15th we had gone to Victoria for the day as Aileen had an appointment.  We picked up Aileen’s friend Bev then went to our son’s place for lunch with them.  We brought Bev up to stay with her mother in Parksville.  Bev and Aileen got together for lunch one day also.    I went to Nanaimo one day and bought us cordless keyboards for our laptops.  Both our laptops have very poor keyboards.  Another day, I went to the Nanaimo Fall Fair.  I was not impressed with the fair itself.  I found it very lacking in substance and have no idea why it claims to be the best fair in the province for cities 20,000 and over!  I finally found the photo competition prints, all eight of them!!!  Four of them were 4x6 for Pete’s sake!  The highlight of the fair was watching a great show by Valdy from 11 am to 12:20.  His second song was The Teddy Bear’s Picnic.  That brought back memories as that is probably the first song I can remember.  They used to play it on CJOR’s Kiddies Karnival which we used to listen to on our old battery radio in the late 40’s, early fifties.  He did a fine performance, as usual.
On Thursday, we took the motorhome for water and to dump the tanks.  We were at 23 days and the black tank was nearly full.  Being able to use the house more helped a lot.  Having a sewer connection down by the barn is nice so we don’t have to find a station and pay.  We drive over to the rodeo grounds to fill the fresh water tank giving them a small contribution to cover the hydro cost. 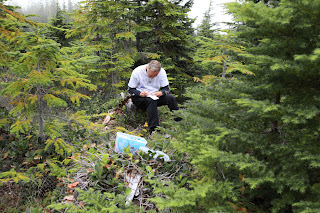 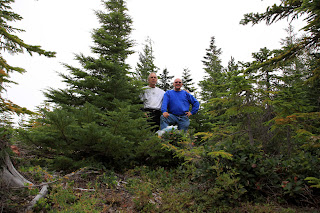 John on the left and me at a mountain top cache 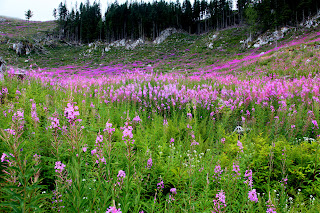 The Fireweed is looking fine 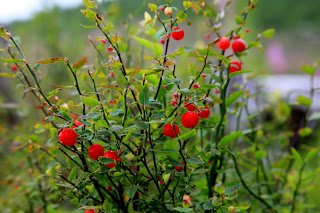 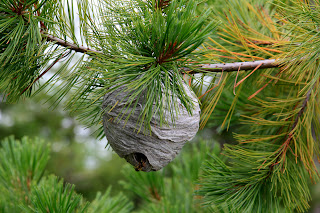 Spotted this wasp nest while riding to a cache 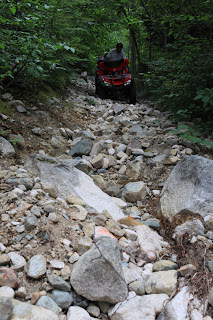 One of the rough roads we rode on 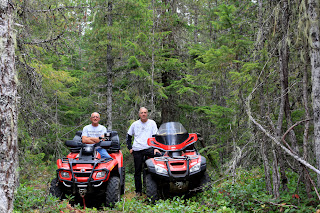 At another cache, me on the left

Posted by John and Aileen on the road at 8:49 PM