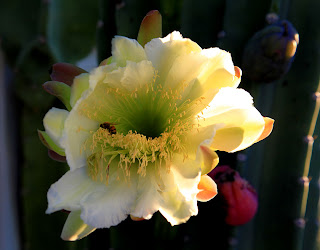 Cactus flower just up the street 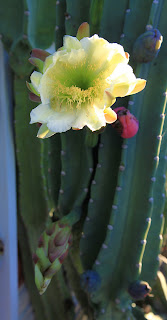 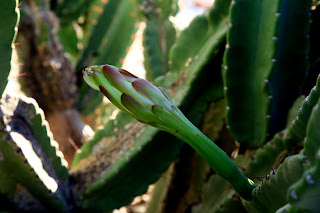 This is a bud which will probably open tomorrow 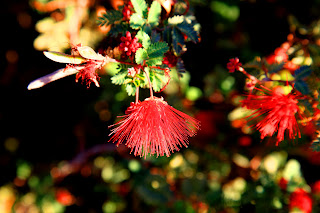 The bees just love this bush

Mitzy and I spent some time in the sun warming up after breakfast on Sunday. We went off to mid morning. We had an early lunch at a Carl’s Jr then I went to the Park and Swap to check out the fantastic selection of ATVs which they claimed to carry. Liars! All they had was some import crap, mostly in little kid sizes. The biggest ATV was a 2 x 4 150 cc. I took a quick walk through the whole place. Lots of stuff!

We headed toward Queen Creek as I wanted to check out one of the ATVs I saw on Craig’s List. We phoned and got directions then headed that way. We stopped for gas, then Staples for paper, business card stock and post card blanks and finally Petco where we got the preferred cat food and cat milk.

The ATV was everything I hoped it would be. It’s a 2004 Polaris Sportsman 500 with 3750 miles and felt like new still. New battery and tires this year. I really like the yellow colour too. I took it over to some bare ground and rode it around a bit.

We visited Jim and Betty and Hito and Dona when we returned home as they had arrived in our absence. I had an email from my sister Wendy Sunday evening. They were leaving Monday morning via and . She said the weather was horrible with wind and rain and hoping the ferry isn’t cancelled. We went to the pool and spent 55 minutes in the water again.

I went to the Bank just after nine Monday morning and deposited some money to cover the ATV cheque. From there I went to the big Walmart at San Tan and bought a seven speed comfort bike for $99. I also got a helmet for less than $10.

Next I went to pay for the ATV. He decided to show me how the winch worked (and it didn’t!). It would power out but not in. We spent over three hours working on it, totally disassembling it in the process and we think the problem is the switch although I was leaning more to the solenoid being the problem. He was going to phone around to see if he could find one. It was 1:53 when I got in the car to leave so I went to the Jungle Buffet for a quick lunch. I was not impressed. I won’t feel like visiting there again this year, so I guess that’s good in a way.

Aileen was unable to track down her lady for a haircut although she went to her house three times. She did get her nap though. I started moving pictures over to my D drive as I couldn’t get the C drive memory enough free space any other way. I took a break and went to buddy beer. I think that is my second time in all the time we’ve been here. I did more on the computer on my return. I had tried to do a defrag last night and this morning had a message saying I only had 8% free space and required 15% for the defrag to work. It took a lot to get it over the required 15%. I will try to put my new downloads onto D drive now. We spent 40 minutes at the pool Monday night. I took Mitzy to the dog park later then we took the long way home.

Aileen tried several times again on Tuesday to catch her hair cutter at home without success. She had an hour nap in the morning and again in the afternoon. I went for a couple bike rides but am trying to not overdo it. I chatted with Hanna and Maynard on the lot next to Jacquie and Jim for awhile. They told me of an interesting book for motor home travelers. It warns you of steep grades and high passes through the western States. I ordered it later plus several others through RV Bookstore.

I had a call from Richard, the ATV guy in San Tan, about the winch. He is now thinking it is the solenoid that is the problem and ordered a new one. We spent 45 minutes at the pool again. I took Mitzy for her last visit to the dog park for the day at 8:45.

It was pretty warm so we had the fan on us all night. We went to Country Store Wednesday morning and Aileen bought the little scrubbies she’s been wanting. We then took Mitzy for her haircut. We came straight home again and went back an hour and a half later for her. Tina cut it really short this time which looks really good. Aileen was able to finally catch up to the woman in here who does hair and has an appointment for 9:30 today.

Dona K came asking for Chatterbox help, which I had offered. I went to Anna at the clubhouse for the list of buddy beer supporters and typed it up in excel for Dona. I noticed Aileen working on Christmas cards after her nap. She picked nearly the hottest day for it. I think she has them all addressed already. I probably should be working up a newsletter to go with them. I had been wondering if we were going to get any mail or whether we had to go to the to wake them up but yesterday there were three birthday cards in the mail box for me.

I went for a bike ride after supper when it cooled off. It was in the low 90s today. I picked up a November newsletter from . I called Richard in San Tan about the quad and he had just finished replacing the solenoid and the winch was working. He is to bring it over this morning about 10. We spent 35-40 minutes at the pool again Wednesday night.

Well here I am 64 years old. Where did the time go? JR in sent me a happy 65th card but said he didn’t know if it was this year or several years yet. There was also a card from Richard and Robin and another from . I’d picked up the mail yesterday but couldn’t figure out who the one envelope was from. I guess Robin had addressed it as it sure wasn’t Richard as I would have recognized his writing. It had me wondering.

I took Mitzy early to the dog park since she seemed to be in a hurry. I’m not sure why since I had her up there at 11 PM last night for her final time. Aileen went to the gym early as well. It is very breezy this morning but I went and took my cactus pictures anyway. The helicopter was just in and packed somebody off to the hospital. It is a pretty common occurrence to have the ambulance visiting our parks since there are so many older people here. For the more serious cases, the air ambulance is called. It is parked only a couple miles away in town. There are close to 3,000 lots in the five parks. We’re probably less than half occupied so far this year.