ATVING AGAIN AND THE SNOWBIRDS CONTINUE TO POUR IN 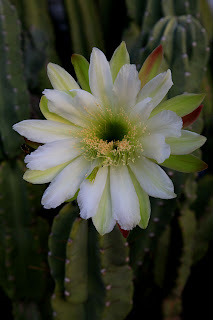 I shot this early this morning. When Mitzy and I walked past tonight, there are four big blossoms out. Shortly after the sun hits the flower, they are finished. 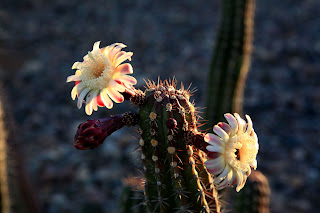 A different type of cactus bloom. Both types are very popular with the bees. This is also a night flowering cactus. 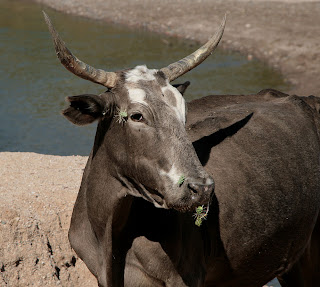 Note the cactus in her lower lip, nose, by the right eye and ear. This is very common. Cholla is the type of cactus involved in this case. 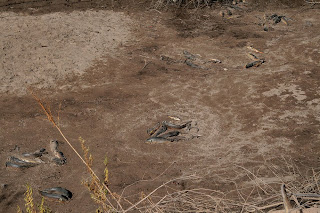 Since the canal was drained, the fish had nowhere to go.

Aileen and I went to Riverbottom Grill for my birthday supper Thursday and what a good choice! The neighbours had been telling us that it was a good place to eat. I had fish and salt potatoes while Aileen had a garden salad and some of my spuds. I also had a Blue Moon beer which went down nicely. The fish was excellent and the spuds delicious! We had just finished when Keith and Phyllis and Dan and Mary Jane (friends from Caliente) came in so we joined them while they ate. The owners came and chatted with us several times. Richard and Georgia called while we were visiting the other couples so I went off to a quieter corner for awhile.

I had hoped to go to Casa Grande to get a mirror for the ATV on Friday but that store has closed so the nearest was . Since we were going past San Tan, I called Richard M to see if he was home then went there for the spare key he’d found for the ATV. I bought the type of mirror that fits in the end of the handlebar which cost $15.

We went to the for lunch and had a good one. Aileen had cucumber and tomato salad with steamed spuds and I had a green salad with a piece of stuffed pizza. We went to PetSmart for cat milk, 3 pack for $2.59 whereas we paid $1.95 each pack at PetCo the other day. Did buy cat food at PetCo though as the other store didn’t carry that brand. I also bought a five gallon gas can at Walmart.

We were going to get groceries at Fry’s but Aileen was pooped so we just came home. I did get gas at Fry’s as the ATV needed some for today. Aileen had a good nap when we got home. Dona had just left the Chatterbox for proofing so I got right at that. There were 52 pages so I was awhile at it. I took it right over when completed and went through the corrections with her. She’s hoping to start printing today. I gassed up the ATV and installed the mirror later.

Wendy and Randy arrived Friday driving 900 kms from . They opened things up then went off for groceries. They had taken the 4 pm ferry to so basically, they made the trip in just over four days. He said it was 3100 kms using I-84 and I- 15. Last year they came I-5 and some other combination and it was 2700 kms.

June J, three doors down Ocotillo sent me a birthday card over so I had to dig out one of mine for her. Aileen wrote in it, I delivered it on the way to the pool. She and Hito, three doors down on Palo Verde, have the same birthday as me. We spent 50 minutes in the water Friday night.

We were up by about 6:30 today. I prepared for the ATV outing. There were a few things to gather and I decided I needed a plastic tote on the front to hold my clothes so they didn’t get dusty after I’d finished with them. Aileen and Mitzy went to to see if the Farmer’s Market was on. Some crafts etc there but no fruits of veggies.

There were only six of us riding today which was just fine. Ed was leader which was also fine as he takes a slower pace with more stops. He was looking better than I expected but he did tire as the day progressed. He’d had a major bout of cancer in the Spring. We crossed the river then the metal bridge and rode along the canal up to the dam. They are working on the dam and have dammed the river just upstream with an earthen dam to facilitate the work. Ed got stuck on the sand hill blocking our departure from the river bottom so I found a way around and helped get him out.

I washed the ATV when I returned just after 2 pm and 41 miles. I had to take both my nozzle and hose as the paving crew destroyed the hose by tarring up the threads and bending it as well. I went for a shower later and used the pool and hot tub. I went for a bike ride after taking Mitzy to the dog run. Dave and Maureen were at Jerry and Donna’s in Tierra Del Sol and called me in as I was riding past so I visited them awhile.

After our 53 minutes at the pool, I took Mitzy to the dog park then thought I’d go to the library. Well when I got there shortly after nine it was locked up. I don’t recall it being locked last year and I’m sure I went there late at night several times. I was going to post a picture of the ATV but realized I hadn’t taken a picture yet. I had planned on taking some on the ride but it didn’t happen. Maybe next post.

Two more of our neighbours arrived today. Phil and Donna and Pete and Jonie pulled in early this evening. John and Carol next door arrived Thursday. The block is filling up, just a few more to go.

Posted by John and Aileen on the road at 9:53 PM