I NEVER PICKED COTTON BUT I WENT ATVING 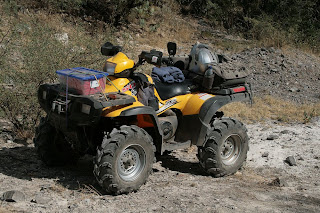 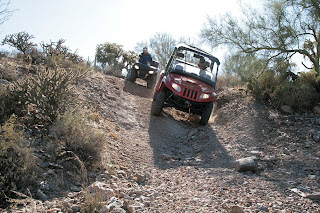 A little bit of a challenge 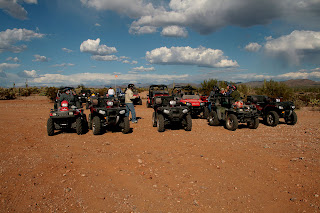 Last rest stop of the day 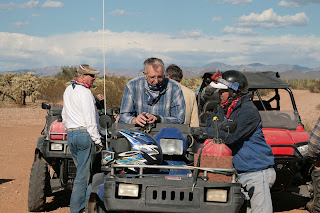 This is where the camaraderie develops 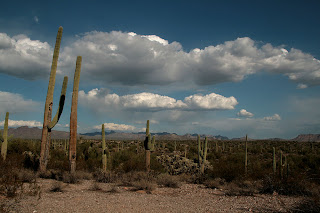 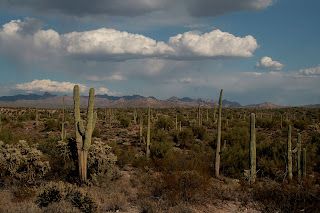 A view across the desert on the way home 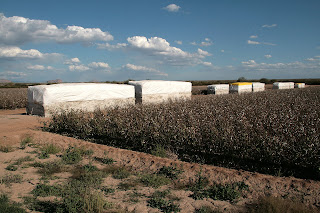 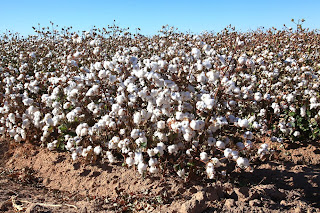 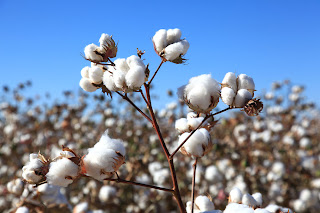 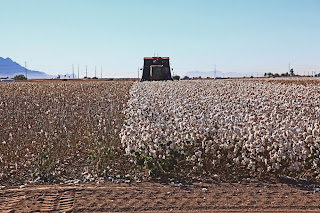 Looks a little different after the cotton picker comes through 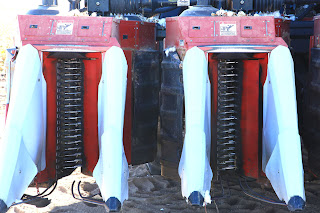 Close up of the cotton picker heads 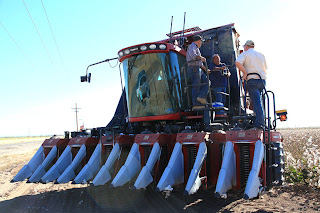 The cotton farmer, on the right above, told us when he a just a young lad the cotton was all picked by hand and it cost about 3 cents a pound. Now they are up to a 6 row mechanical picker and the cost is still 3 cents a pound! There would be thousands of people employed if done by hand but it would, of course, be impossible to find people who would pick cotton today. 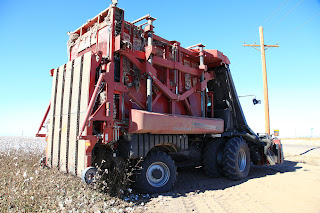 I took Mitzy to the dog park a couple times then we left her at home while we went to Johnson Ranch shopping on Sunday morning. We picked up a few things at Walmart then went to Fry’s for groceries. What a zoo that place was. I thought it would be quiet on a Sunday morning but there must have been no churchgoers in that area. The store didn’t seem to be logically laid out either so we spent a lot of time going back and forth. It was after noon when we returned home.

Aileen had a nap after lunch while I went to the library then rode up through on my bike. I did some checking for rentals here in Caliente on my ride and with Mitzy later this afternoon. I sat and read awhile and Randy was over to chat for a spell. Don and Lois A arrived today and are looking well. Phil P was telling me Donna had open heart surgery over the summer. Dona K was telling me Larry R had three valves done just before they were to leave to come down here. That’s two in our block. Then tonight Randy was telling me Doug J had a heart attack during the summer so that makes three on our block of Palo Verde.

Aileen went to the gym and I took Mitzy to the dog park first thing. Later, Aileen went to the Monday morning announcements. She paid for our computer club renewal. She also has joined the Caliente Clowns. I washed the park model and carport this morning. Later Phil P came by with a message from Aileen that I was to go to the front office to get Chatterboxes to deliver. I think I ended up with most of them. It seems, I heard later, Dona was to have been there to organize but she wasn’t so I just grabbed the majority of what was there since no one else seemed to be doing anything.

After lunch while Aileen napped, I delivered Chatterboxes all over . I also bought a short piece of cable and a pair of clamps to make a tow strap for the ATV hitch ball. I bought both ½ and 5/8 hose fittings for the ATV wash. Not sure what size it is but when I figure it out, I’ll return the one that didn’t fit.

My CD Photographing America arrived Monday as did my RV Bookstore order. We went to the ATV club potluck at in the evening. Aileen had made a vegetarian stew in the crockpot which kept overpowering us all day with its good smells. It tasted just about as good as it smelled, too. We went to the pool a little earlier and visited Randy there. Wendy was practicing guitar and came by later to visit at the pool.

I went riding with Blue S Tuesday. We went through the State Trust land behind the park over to Arizona Farms Rd then along it a mile or so. Where Blue planned to go was closed so we went further and finally found a place where someone had cut the fence near a subdivision and there were no signs telling us to stay out. We crossed the railroad then over to a fancy paved road which was to service a subdivision that didn’t get started. From the end of it we followed the railway over to Highway 79. Since there was a crew working at the big water tank in the area, the gate was unlocked so we were able to access #79 easily. We crossed over and went east for awhile then had our lunch near a corral and large dugout. While we were eating, a little twister lifted a bunch of debris past us.

We wandered over to and went back out to #79 which we followed all the way home. We were able to mostly ride the fence line away from the pavement except where it was fenced around culverts. I didn’t take any pictures today. Blue was telling me he turned 81 in September, the day after his and Ruby’s 62nd anniversary

We went to Coolidge for groceries after breakfast Wednesday. We delivered a few more Chatterbox’s in and three in Coolidge. Aileen bought a boot rack at Walmart for just inside the park model door which I assembled later.

Ken and Char M from arrived today. I chatted with them when I went for a bike ride. Char had been around to say hi to Aileen already. I rode around part of Caliente and til my butt got sore. I went over and put the new end on the ATV wash hose. Now I can return the other size one. Bud and Arlene arrived next door late Wednesday afternoon. They have a new Buick SUV which is pretty fancy. They are both looking pretty good.

We spent our 65 minutes in the pool again. Wendy and Randy decided to go for a walk instead but dropped by the pool to chat awhile. Mr & Mrs Wales, I think, from 316 Saguaro joined us for awhile though. The Mrs told us they honeymooned in Parksville 40 years ago and they still go there fairly often. They are from University Way, WA.

Sixteen of us went out ATVing today. We got to the square coke ovens and Lulu’s Mine but it took awhile as someone didn’t wait at a turn and the rear ten of us ended up at Ajax Mine instead of where we were supposed to be. We finally met up with the other six way back down the road. We had our lunch at the square cokes. I filled the gas right to the rim this morning and again on the return and got 19.2 mpg . That is considerably less than my CanAm but it probably is only about $100 for the season.

Randy and Wendy came with Aileen and I tonight when we went to the River Bottom Grill for supper. The fish and salt potatoes were good again. They had some good country music playing also. We went to the pool again this evening. We haven't missed a night yet since we arrived.

Posted by John and Aileen on the road at 7:34 PM