A RATHER LARGE SPIDER 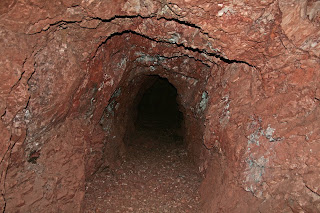 Our lunch time stop at the twin mine tunnels 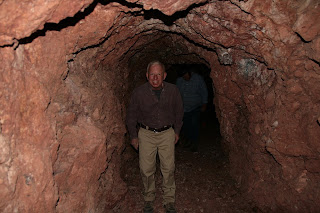 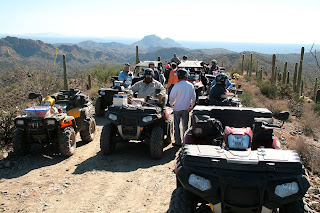 Rest stop on top of the Little Spline 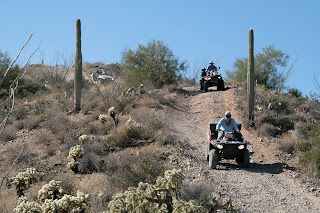 Part way down the Little Spline 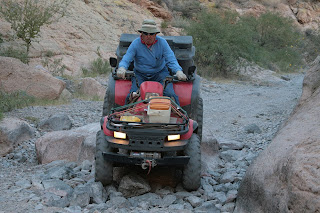 Blue at the top end of Box Canyon 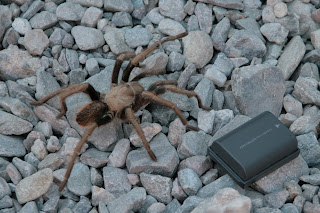 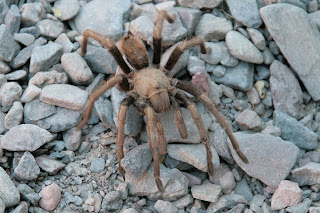 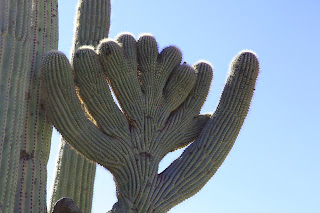 Eleanor's Crown Cactus, so named because my aunt Eleanor spotted this one last winter when we were out for a drive 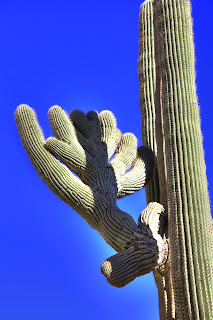 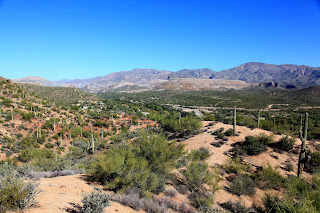 The south end of the Ray Copper Mine is in the centre and it runs for several miles off to the left. What used to be the town of Ray is somewhere under the rubble. The town was moved and became present day Kelvin 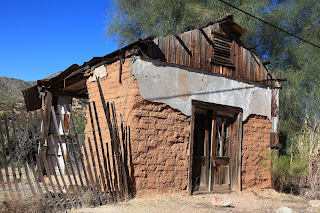 An old adobe structure in Kelvin
We went yard saling Friday morning and I actually bought something; two wood 8x10 picture frames. I made a print in the afternoon which will fit one and I have another picture I can cut to fit. I towed Bud’s golf cart around back as the batteries were dead and he was going to install new ones. Aileen made yam fries for lunch which were really good.

Aileen was thinking her sore and infected big toe was caused by a thorn so after contacting our medical insurance people, I took her to the new hospital to get it checked over. The doctor on call is sure it is an infected toe nail and gave some suggestions for treating. The insurance emailed Aileen forms so I printed them right away. I also printed her letter to her pen pal, Deanna. She’d received one from her recently. I also printed Janet and John’s travel dates to and here for future reference.
We beat Randy and Wendy to the pool Friday night. They came in the gate just as we hit the water. Randy helped me cover the pool – first time this fall but the pool is getting a little cooler. I went for a bike ride in the afternoon and wished I’d worn a vest as the wind was cool.

Saturday morning we got up and going and were able to go to both the Caliente and clubhouse yard sales. We bought nothing at either but Aileen decided to return to one of the private ones we were at yesterday to see if the silverware tray she saw for 35 cents was still there. It was but now it was 25 cents so she grabbed it.

I think there were 13 of us ATVing Saturday. We were to go to the diversion dam via the steel bridge but it was gated with no trespassing signs which we decided to obey. Instead we went just up the road then cut across to . Some of us managed to get under the railway but the side by Razors had to go further to find a crossing as they are taller machines. We went from 7 mile gate to a twin tunnel mine I hadn’t been to before. We also went to what they called a watering hole built by the fish and game department. It is a large area of galvanized roofing covering a cistern which then gravity feeds a small water tank controlled by a float valve. The rain falls on the roofing then drains into the cistern underneath. It is fenced to keep cows out but most wildlife can either go under or over the fence. Apparently there are several of these around the desert.

We finally got to on the way home, which I’d been wanting to do since I got here. Since one of the machines was having problems, we had extra time to spend in the Box so I did some pictures including a tarantula. Blue lost his sunglasses crossing a rocky spot but we were able to go back and find them right where he thought they would be. I drove to the gas station again to fill up. I cleaned the air filter when I got home and greased the front end. I could see another fitting but now I need the flexible hose gun which I think I left in storage. The little solid tube grease gun I bought last year was all I needed for the CanAm.

I went for a bike ride before supper. We went to the pool for an hour after supper Saturday. Randy and Wendy came walking by for a visit but no one else in the pool or shower house.

We got up and going in good time Sunday morning then Aileen packed us a lunch while I got the car ready. We got cash out of the bank in and I got short changed $20. I could see the tenth 20 but it got pulled back in before I could grab it. I took another withdrawal of $20 to see if the missing bill would appear but it didn’t.

We filled up with gas then headed out the - . I dropped off a Chatterbox at one of our advertisers out there then we continued on. I wanted to have another try at photographing Eleanor’s Crown Cactus so we stopped when we found it. The light was still bad as it was so contrasty with the bright sun. I think a high overcast would work the best to give good light without any shadow. I climbed up a little hill to take a shot of the start of the Ray copper mine which is huge as it runs for several miles. We drove in to for a quick look, not that there was much to see; just a few houses that had seen better days although there were a couple that had been spiffed up. We turned south on #77 and had a few miles of new country until we got to Winkleman where we had joined #77 two years ago coming down from Globe. We drove in on the for a very quiet lunch spot. It was so nice I lay back in the chair soaking up the warm sun for awhile afterward while Aileen sat in the shade working on her Sudoko.

We headed toward when we got to #79 then turned west on Tangerine at . There was a large shopping center there so we went to see if we could find a couple things we were looking for. No luck though. We followed Tangerine over to I-10 which we took up to #87 at Picacho then up to Coolidge. I washed the car in Coolidge while Aileen gave Mitzy a walk then I filled our two water cans at Safeway while

Aileen went in the store for some rice for a recipe. Our little drive around the block Sunday was a bit over 300 kms (187 miles). We visited Wendy and Randy again in the pool along with Gene from .

Aileen went to put a rice dish in the crock pot this morning and the package of basmati rice (from ) that she bought at Safeway yesterday was full of weevils or maggots. She was not impressed! Wendy had a bit of white rice we could borrow and continue with the recipe. Aileen managed to find the receipt for the rice so it is goes back. I went to the bank first thing this morning and told them my tale. Since they hadn’t balanced the cash machine yet, I had to wait until they did. Well, by golly, we’re $20 over so here you are sir! Next up was returning the rice to Safeway. No, I don’t wish to look in the bag – here’s your money back! I then bought some brown rice at Walmart in a clear bag so I could check for critters.

Posted by John and Aileen on the road at 1:05 PM