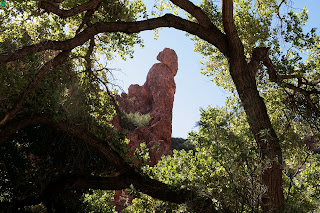 The Praying Maiden in Martinez Canyon 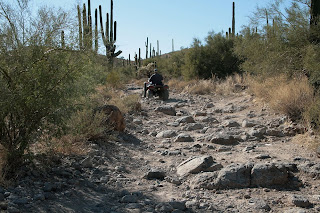 Ken riding up the rough and rocky road by South Butte 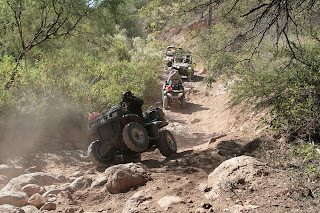 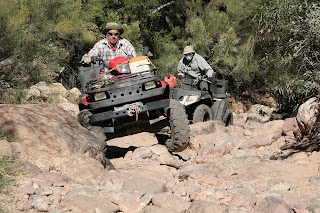 Blue leading the charge through the rocks 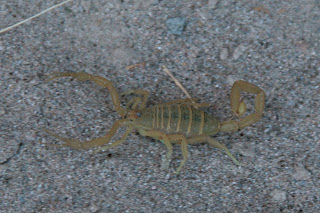 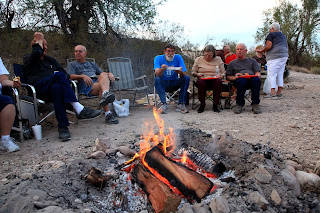 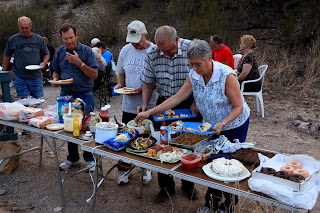 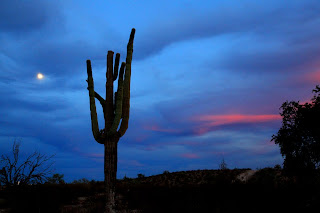 The nearly full moon, a saguaro and a bit of sunset 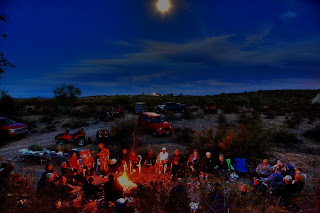 A shot taken well after dark 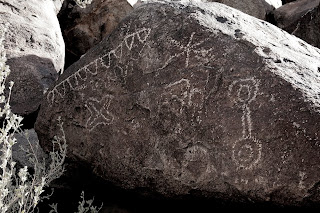 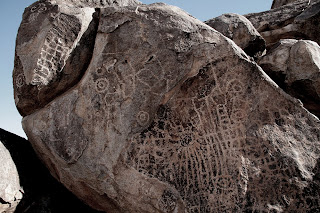 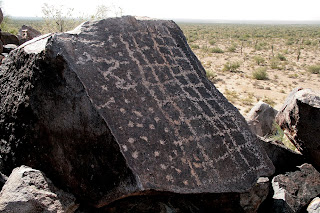 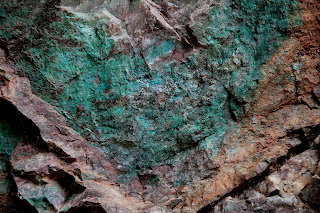 Copper in the diggings 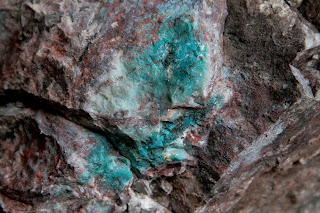 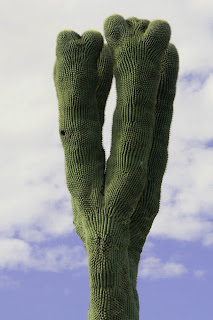 I was awakened at 2:45 am Tuesday by a loud roaring engine so got up to see and it was the ambulance parked at the front of our trailer. I watched them walk big John out from next door and load him on a stretcher and take him away. I talked to Carol right after through the window and she said he was dizzy and walking into the wall. Aileen slept through the whole thing as she had ear plugs in. I told her later it sounded like inner ear infection which she agreed. Carol brought him home just after 8 am and he looked fine. It was the inner ear and the doctor gave him a shot of antibiotic and he was cured already!

Ken Mackley and I went riding with Blue on Tuesday. Dave Lampear and Lee Robb also came along. We went past the prison and took the power line road. We had lunch in after stopping at the old stage station. We went further out the power line then turned down and went to the windmill on . From there we went down to the river then up the rough and rocky road by . That sure gave Ken a workout with his small ATV. We had hoped to sneak by the canal work but they had us totally cut off so we had to go up to the power line and all the way along it. Groan! I had started with 8 or 10 miles on my fuel and came close to running out. I put 4.117 gallons in at the station. The tank is only 4.25 gallons according to the book so I am going to have to carry spare fuel from now on.

We went to the Bobby Hitt show at the clubhouse Tuesday evening. He was good, doing mostly covers of various country singers plus a few other types of music. Well worth the six bucks. We went to the pool late and got to visit with Ken and Char. Ken claimed to be recovered from our marathon ATV ride today. Since we are usually the last ones using the pool, we are covering it even though it is somebody else’s turn. I signed us up for the duty for the next couple weeks.

Aileen did laundry Wednesday morning. I went to Country Store up at the clubhouse and actually spent money. I bought a set of Allen wrenches, an ATV tow strap, three pair of socks and a fleece jacket. Aileen went up later but I don’t think she bought anything. I also had lunch up there consisting of a polish sausage in a bun and a bowl of beans.

Aileen had a good nap after lunch while I went grocery shopping for her. I bought most things at Fry’s and a few at Safeway, both on the . I got a gallon of milk for $1.59 and Coke at 4 dozen for $9. Aileen helped out with the Caliente Clowns banana split fund raiser. The Florence Jazz Band performed and sounded very good. I tipped and tailed the green beans I bought and they were tasty at supper. I also got my spare gas mounted on the ATV so no more holding my breath like the last ride.

After supper I printed a couple 4x6s of Ken on yesterday’s outing and we took them over. Stopped for a few minutes and Char showed us some of her art on her camera. We popped in on Ken and Marie for a few minutes and I lucked in to a dish of ice cream as they were just dishing it. I haven’t had ice cream since we left Errington back in August and here I’ve had it twice in one day!

There were seventeen of us ATVing Thursday. It was quite windy and lots of dust blowing on its own out there. We did my favourite area, then and over the ridge on the way back. I took quite a few shots of some of the rough spots. We met at Baier’s for drinks after our ride today. It was a nice way to meet people a little better.

We went to the pool with Wendy and Randy tonight as we all happened to head out the door at the same time. We had a good visit with Ken who came a few minutes later. Char had been earlier. Aileen was chatting online with daughter Bev later who said Salmon Arm was like a skating rink. I had noticed it was -3C and Bev said it had rained earlier.

Ken Mackley was over Friday morning for a little screw driver for a project and later for help unloading a fridge. I tried to find out why my Harbor Freight order was cancelled but couldn’t catch the right guy. I finally called the Apache Junction store and they had a scooter carrier so we went up there mid morning. They actually had several. List was $220, it was on sale for $170 and a guy behind me in line gave me a 20% off coupon so I paid $137! The 1 ¼ to 2 inch receiver adapter that was $41 at the auto parts store was $25. I also bought a 1 7/8 ball for $10 and an 18 inch paper cutter for $25. Keith W down the street and Sinc D across our street were there and helped me load it in the car.

I stopped at the new Ride Now ATV store on Apache Trail and bought another mirror for the right side of my quad. We got home in time for Aileen to have a good nap. I took the ATV and hauled a couple loads of scrap wood from the recycle bin out to our meeting spot for the cook out. I started working on the new scooter rack but there appears to be quite a bit of assembly required. I got our meal, clothing and camera stuff loaded on the ATV then we went out just before 4:30. Ken and Char followed on their ATV. There were at least 31 of us and we didn’t eat half the food, I’m sure. I did some pictures, some of which turned out fairly well. We were home shortly after 7. I tiddlied up seven photos and emailed them off to the group.

We shared the pool with Gene and Taunia’s daughter and family and later Taunia. We had a good visit. I got an email from John H saying Dad had another seizure so Janet suggested checking for infections and surprise, he has a bladder infection as well as a chest cold. Mom was not looking good, keeled over in her chair and incoherent. We got another email from John the next day and it turns out Mom had a pain killing patch on that the nurse had forgotten about so they finally removed it and Mom has improved from how she was.

I did remember to go up to the clubhouse Saturday morning for my Big Breakfast I had paid for the other day. I managed to get Ken a ride with Jim Baker in his Arctic Cat side by and he really enjoyed his day. We went to the petroglyphs down south which is a long trip – about 68 miles. I did get to see more of them this time since there wasn’t some jerk shooting a gun close by like last year. We ran into quite a dust storm along the way before lunch. There were 14 machines out. I spotted a nice looking crown saguaro with four tops all crowning so stopped for some shots of it. I hurried to catch up, but not far along the group were stopped looking at some old diggings. I presume the green and blue colours we saw were traces of copper.

I started assembling the scooter tote when I got home and it turned into quite a job. I borrowed a cordless drill from Ken and pretty soon he came over to help. It is going to need modification before it will do the job as the scooter is slightly too long. Some thought has to go in to solving several issues. Ken and Randy both have some ideas on it. We joined Wendy and Randy at the pool for an hour or so.

I took Mitzy to the park just after 8 when I got up this morning and again after breakfast. Aileen made us gluten free pancakes which were excellent. We bought the mix in a great health food store in and would like to find one like it closer. Surprisingly, the pancake mix was made in when I checked the label. Mitzy and I walked the whole length of then out into the desert near the other dog run. We walked around our half block with Aileen later and it started to spit a little just as we returned. It has been very windy all day with dark clouds at times but so far just enough spits to show the dust on the car. Ken M came by looking for a valve cap with the notch in it to tighten the valve in his hand cart tube which was leaking.

After lunch I went up to the jam session and listened to Wendy sing three songs. Her Meadow Muffin Blues (about cow pies) went over well. The audience of about 40 was giggling and tittering. There were some fairly good performers and some not so good – all better than me though! When I came home, I got at editing yesterday’s images, emailed some to the other riders and got busy on the blog .

I went to the library after supper and while there some not so bright security person locked the door without checking to see if anyone was inside. Therefore, the building is now unlocked all night since I had to unlock it to get out. Such goings on really make you question the value of the whole security program. I guess it is a good thing they are all volunteers.

Posted by John and Aileen on the road at 8:35 PM