CRITTERS AND US ENJOYING GREAT WEATHER NEAR SIDNEY, BC

Well, just one day left in this neck of the woods.  We've had some great visiting with Richard and his family.  Since we were on our own for supper last night and I had been craving Chinese food, Aileen did some online research and came up with one that seemed to work.  She called them and the person she spoke with said no problem getting gluten free.  At the Lucky Village, she was again assured the food would be gluten free after she explained how severe her allergy was.  Well, apparently they lied, because she started having problems before bed and she was still feeling ill today.  I had totally different food off the buffet and it didn't sit well with me either.  We sure won't visit that restaurant again!
We took Aileen's cousin Pat, and his lovely wife Irene, to the Rumrunner Pub in Sidney for lunch today.  He is 92 and she 89 and still doing quite well.  We had a great visit with them.  After taking them home, we picked up Georgia from school and brought her out to the motor home.  Richard came later for supper then we went for a walk down to the beach near us.
This campground we are in, Oceanside, has been full all weekend and there are still only one or two sites open.  There was a Good Sam Club rally over the weekend and it turns out we were lucky to even get a spot. There are very few decent campgrounds in the Greater Victoria area so the supply is very limited.  At least three quarters of the sites in this park are taken up by full time residents.
Tomorrow we are meeting Richard's step-mother-in-law for lunch then we will have supper with Richard and family.  Wednesday morning, we depart and head up Island to quieter surroundings. 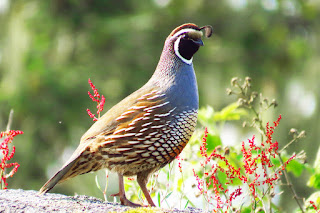 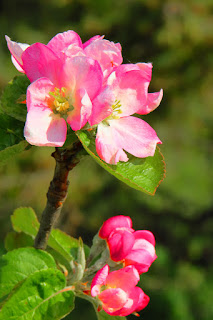 On a rock bluff overlooking a swamp, I spotted several wild apple trees in bloom 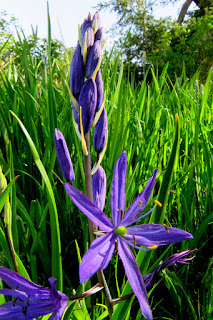 This is a Great Camas.  They seldom have more than two or three flowers open while the Common Camas has many blooms at once. 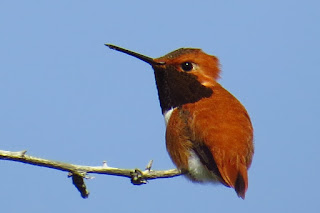 I spotted this male Ruffous Hummingbird down near the seashore yesterday.  This is taken from 80-100 feet away with my Canon SX50 at full magnification. 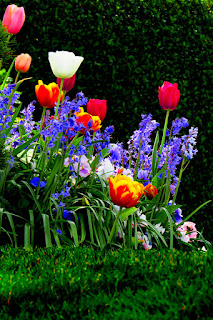 We took a picnic lunch and went with Richard and Georgia to Robert's Bay just beyond Sidney.  After lunch we walked along the beach and peeked into the resident's yards.  These flowers were just up on the bank above the beach. 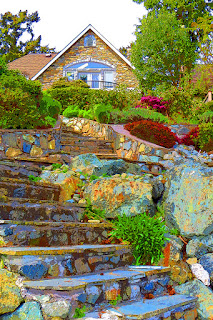 Steps down to the beach from this neat old house.  I have taken the liberty of playing a bit in Photoshop to add some impact. 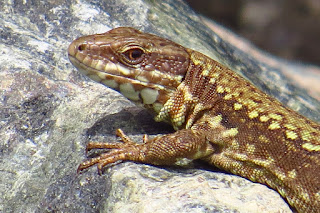 We saw lots of these lizards sunning themselves in one section of the beach.  My research leads me to believe they are European Wall Lizards.  Back in 1970, a lizard farm closed and they released their remaining stock into the wild.  Apparently there are native Northern Alligator Lizards in this area but they looked less like my images. 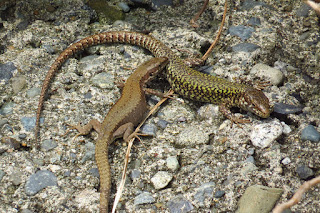 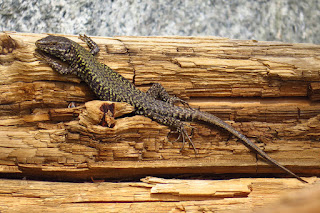 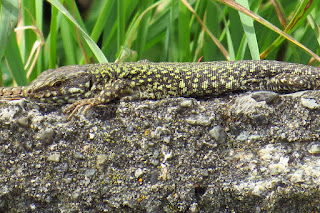 They really blend in to the cement wall 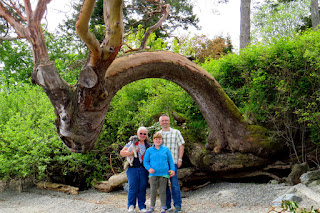 Mitzy, Aileen, Georgia and  Richard under what Georgia named the Reindeer Tree 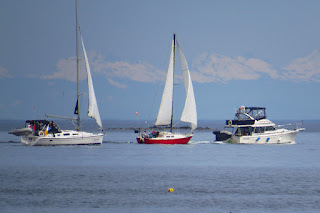 With such a warm Sunday, there was a lot of boat traffic visible from the beach 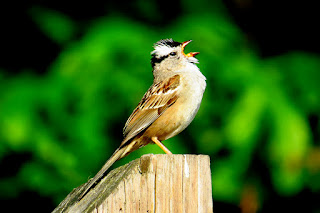 Posted by John and Aileen on the road at 8:20 PM