A NICE EVENING AT THE OCEAN

Aileen and I are keeping busy around the place here.  Aileen has been doing some gardening while I have been picking rocks, hauling firewood and playing with the backhoe.  Charlie has part of his field worked up to seed but just as we were about to start seeding, the rains came and the field became impassable.  It is getting close to dry, so if we don't get anymore rain tomorrow, we should get it planted over the weekend.
Sheila's youngest brother, Terry, had a birthday so we had a supper to honour him.  Aileen whipped up a gluten free cheesecake and a salad and Sheila provided the rest for a tasty meal.  Two of C&S' boys and their girls joined us.
Mitzy has been having some issues for the past week and has probably lost a quarter of her body weight.  She started having some type of choking spells last Friday and we took her to a vet in Nanaimo who diagnosed Reverse Sneezing and gave a mild prescription.  She has mostly been off her food since then.  Today when she seemed to be getting worse, Aileen made an appointment at the vet clinic in Courtenay, that she prefers, for tomorrow morning.  Late this afternoon, Mitzy regained her appetite and was ravenous.  She is still having some of her episodes so we will maintain the appointment.  The thought is that she has something stuck in her throat/nasal passage or some type of growth there.  We hope to have a good resolution tomorrow. 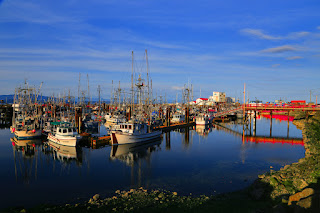 Since we had such a nice evening last night, we picked up Bev D and went for a drive to view the ocean from several spots.  First stop was the local boat harbour, French Creek. 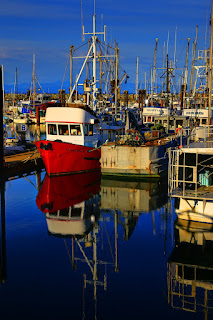 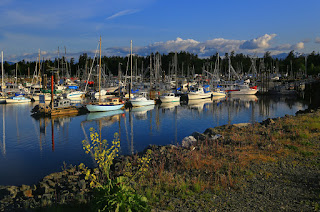 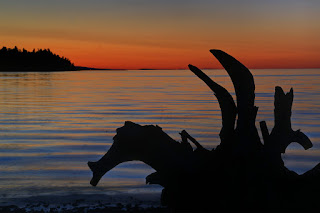 We wrapped up the evening catching the sunset from Parksville Beach.  I thought this stump resembled a Seahorse. 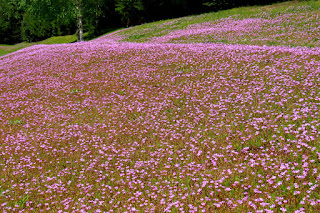 As I was driving south of Parksville yesterday, heading out to do some geocaching, I spotted this roadside in pink. 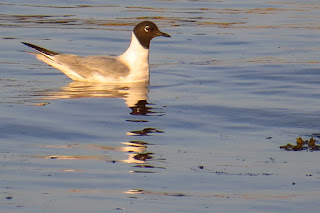 I believe this is a Sabine's Gull.  They summer in the high Arctic and winter in South America so I presume this guy is just resting up before continuing his northward journey. 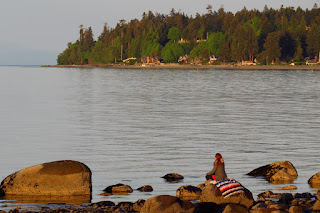 This lady was admiring the view at Qualicum Beach 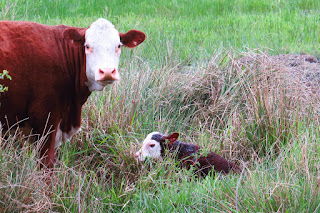 Charlie spotted his heifer lying in the field when he came home from work this evening and went to investigate.  Just as he got there, a little bull calf popped out.  This is her first calf and she knew exactly what to do.  She paused in her licking to show us how proud she was.  The calf at this point hadn't made it to his feet.  Shortly after he was up and nursing so that is a good sign.

Posted by John and Aileen on the road at 9:52 PM