A PAIR OF SICKIES

We moved over to Quartzsite Tuesday morning and I spent the next three days doing some intensive exploring and route finding, getting a start on putting together three ATV day rides for some members of our club in Florence.   I was thwarted in creating a great circle ride in one spot as the whole mouth of a valley is private land and they have totally blocked the access even though a through road shows on the map.  Too bad but that's how it goes.  I have two of the rides laid out now and whenever I recover from this nasty bug we both have, I will work on the third one.  I have it planned out in my mind but will need to go over the ground to make sure the trails are still open and refresh myself on some of the access points.
Aileen was coming down with something for a few days before we left Florence but it just was sort of there.  By the time we got to Quartzsite, it was now more than something.  She is still doing lots of heavy coughing but we're hoping it is about to improve.  I am part way through the symptoms now but not into the heavy cough although feeling kind of blah.
It didn't help that we had a good wind storm yesterday and last night creating lots of blowing dust. Last night in fact, was quite the night.  The wind kept rocking the motor home and the wind was shrieking in all the things attached to the motor home such as solar panels and awnings.  Aileen said some violent gusts would wake her and then the wind would suddenly calm and that would wake her. We are currently parked on State Trust land which our yearly pass allows us to park on for free for up to two weeks.  We are hoping to move to the Hi Jolly BLM free camping area later ithis week and use that as our base for the ATV rides which are to take place next week.  If that is too crowded, Plan B is to move to the free BLM camping on Plomosa Rd, a little further north but still central enough for the rides. 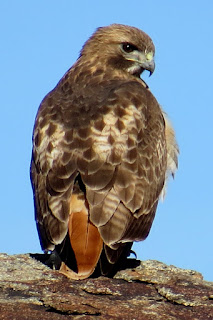 I was able to capture this Red-tailed Hawk from the RZR my first day out.  He allowed me to turn the RZR and position myself for a clear shot.  He is perched on a rock as there are no shrubs or cactus in this area.  I took the opportunity to wander around this area and found some old diggings that have some very nice specimens of Chryssocola which will make a couple of ladies in my ATV group very happy.   The diggings are out of sight of the road so mostly undisturbed. 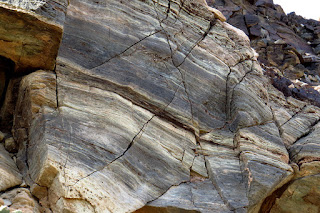 There is a lot of historical mining activity all through this area so there are many interesting trails to ride and explore.  This was up above some old mine shafts on a narrow dead end road that would have room for only three or four ATVs to turn around.  I had walked up it and found this neat looking rock. 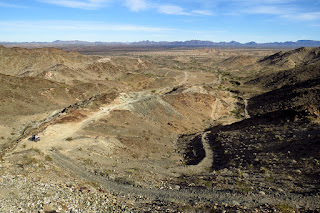 The view down to my parked RZR from the above photo, looking out over the valley north of Quartzsite, AZ 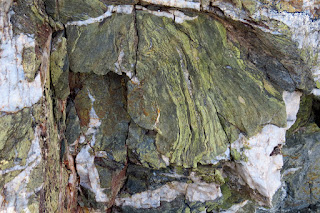 Some neat exposed rock near an abandoned mine shaft 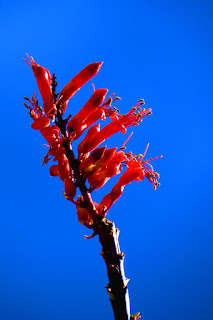 I managed to find one blooming Ocotillo in all my riding 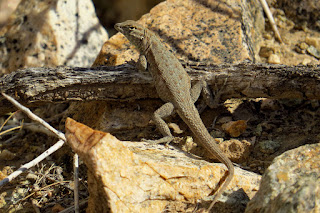 Another shot from the driver's seat in the RZR 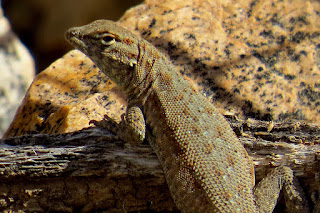 I managed to get one decent closeup before he scampered away 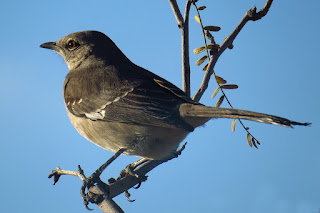 This shot was taken from the passenger seat in the motor home while I was at my computer.  I think this is a Northern Mockingbird.  It was about the size of a Robin. 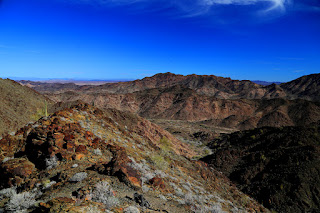 While looking for a bypass around the blocked access to Marquetta Pass, I drove up one valley and then followed an old trail up to this great viewpoint that actually looks down into the pass.  However, this was as close as I was to get. 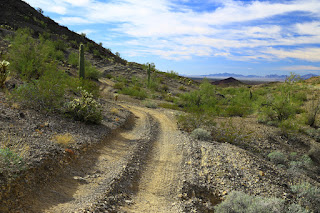 On day three, I took this shot in Quinn Pass looking back toward Quartzsite. 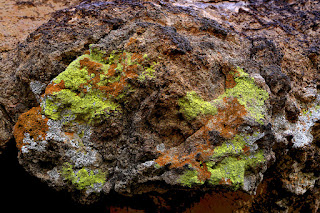 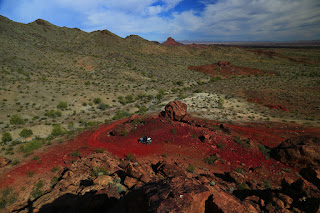 I named this Red Hill and you can probably see why.  There are some huge boulders and I climbed up to the top of the highest ones for this view. 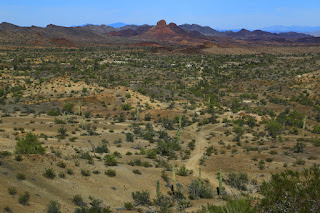 Looking north from Quinn Pass, the Red Hill is in the top left and this is part of the area for one of my rides. 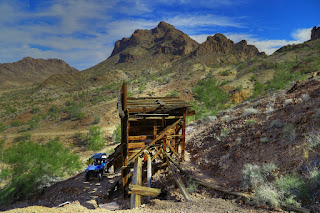 I couldn't come up with any names for this mining area on the several maps I looked at so I took the liberty of naming it Ibex Mine since it is under Ibex Peak.

Posted by John and Aileen on the road at 9:29 AM