WE TAKE A MINI VACATION

On July 26, Aileen and I drove to Duncan where we met up with my Cousin Judith who drove up from Victoria.  We went in our car up to the Lake Cowichan area where we spent the day exploring and geocaching.  It was a great way to visit and catch up with each other.
On July 31, Aileen and I drove down to Victoria for a mini vacation.  Our friend Bev D took Sophie into her house in Parksville while we took Mitzy with us.  The daughter and son in law of Aileen's cousin Pat and Irene were off on a motor cycle trip and had invited us to stay in their house for a few days.  It was certainly a different experience for us being in a monster house with at least ten foot ceilings and lots of halls and rooms.  When you have spent this long living in an RV, you tend to spend a lot of time just wandering around all that space.  We had a great time visiting with Pat and Irene who live in an adjoining house connected by an internal stairway.  It is a great way to age in place! 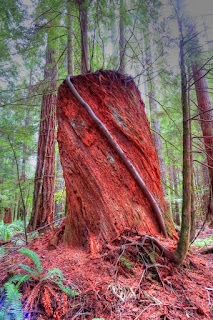 Along the road to Youbou while geocaching, I spotted this old stump with quite a twist to it and a little tree growing on top had its root follow the twist under the bark, before the bark fell off.  Nature can be very creative at times. 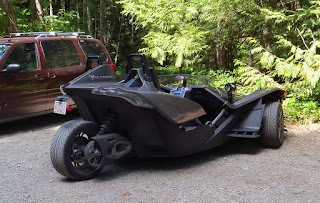 A couple days later while geocaching near Parksville on my bike I spotted this Polaris Slingshot from Alberta.  I had read about these machines but this was the first one I have seen.  Quite futuristic, I thought. 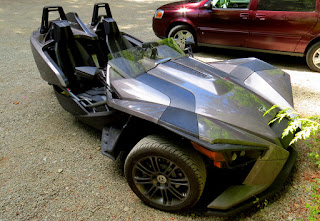 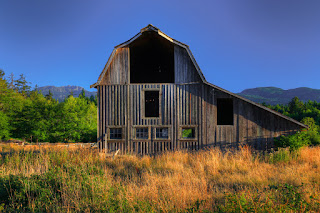 We have driven past this old barn north of Qualicum Beach countless times and finally decided to stop and try some photos. 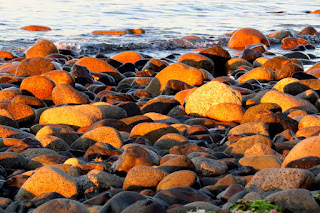 These golden rocks along the ocean shore are the product of a nice sunset.  Without the sun's effect, the rocks were all dark. 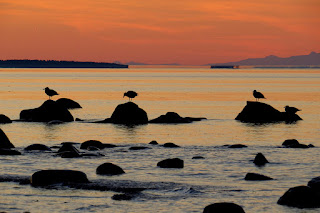 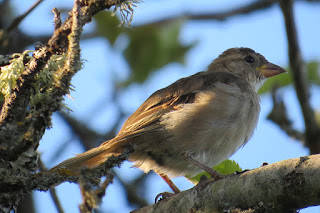 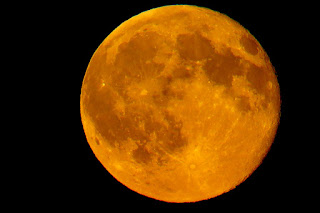 The blue moon on July 31 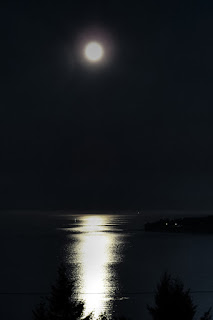 The blue moon over the ocean 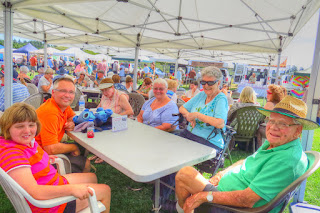 On Saturday we went to the Saanich Farmer's Market and met with Richard and Georgia who are on the left. Aileen and Irene are in blue while Cousin Pat, so named for being born on St Patrick's Day, is in green on the near right. 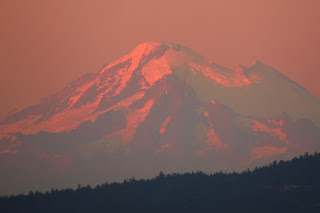 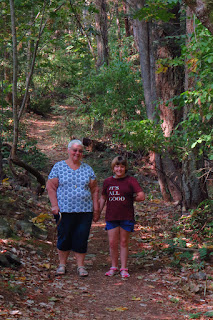 We spent the Sunday with Georgia while her parents went off on a short vacation.  Here, she and Aileen are on a forest path near her house. 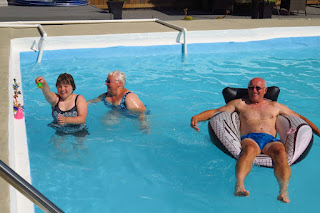 We took Georgia to her Auntie Nan's in the afternoon where she would be staying for a few days.  We got to join Brian and Nancy in their pool on a gorgeous afternoon.  Nancy took the picture with my camera. 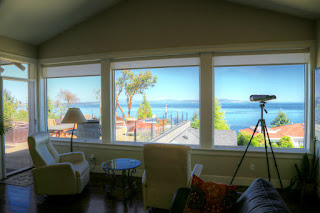 This is the living room in the house we vacationed in .  If you look really hard, you might see Mt Baker in the center window.  Pat and Irene's house is under the huge deck visible on the left, the deck is their roof.

Posted by John and Aileen on the road at 9:24 PM