ROAD TRIP TO TAHSIS, BC

We had our son Richard and Granddaughter Georgia with us for eight nights.  We spent two nights at Cousin Bill's in Campbell River then three nights at Buttle Lake Park where we were beyond the cell/internet zone so we had quite a bit of extra time each day.  We leisurely explored some of the area and did a bit of geocaching as well.  On the Tuesday, we made the drive into Tahsis which used to be a bustling resource town with logging and a sawmill but since the mill closed a few years ago has had a large reduction in the population.  It could be a pretty nice place to live if you were okay with being far from the normal trappings of modern civilization such as shopping, fine dining and entertainment.  There is great salt water fishing, great scenery and lots of hiking/walking trails in the area and it would appear to have lots of area to ATV in.  There are many empty houses and some were advertised as low as $25,000 for a two story three bedroom building.  Being an old company town, the houses are very closely spaced and not much imagination used in the design or building.  We did get to see some of that very elusive commodity for most of the province and that is rain.  Not that we had overly much but most of Vancouver Island has hardly had any for quite some time.
After our busy past ten days or so, we're having a quiet senior's evening at home.  Other than doing laundry and posting this blog, that is.  Richard and Georgia left after lunch and Charlie and Sheila went off to dinner and dancing with friends.  Tomorrow we are meeting my Cousin Judith from Donnelly, AB, in Duncan to visit and do a bit of geocaching.
Our schedule into the next while is filling up.  Haircuts for Aileen and her friend Bev on Tuesday and I hope to go to Ladysmith Camera Club Tuesday night then Wednesday we take Sheila to catch a plane.  August 4th, Aileen plans to take her friend Bev to her specialist appointment and I think Aug 10-14 will see us at another Escapees Chapter Rally.  See, even not having fixed roots doesn't keep us from being busy!  I'm also trying to get some ideas together for our trip south this fall as we plan to swing over to Grand Junction, Colorado to visit friends on the way to Arizona.  I hope to find a few new routes that we haven't yet traveled so we get to experience some different scenery.  We're thinking of crossing at our earliest allowable date which will mean coming back north a little earlier next spring. 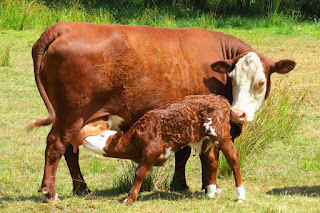 The newest addition here at the farm 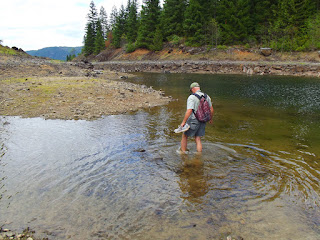 Here's a shot Richard took of me heading for a geocache.  After putting on our boots and walking just out of sight up ahead, there was a land bridge we were able to walk back across without having to wade. 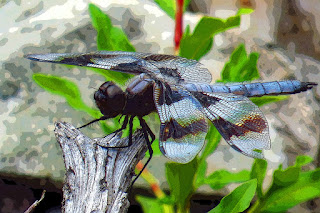 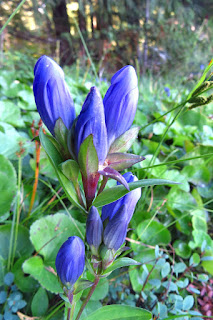 At one geocache along the Tahsis Rd, we walked down to the lake shore and saw lots of these beautiful Gentians. 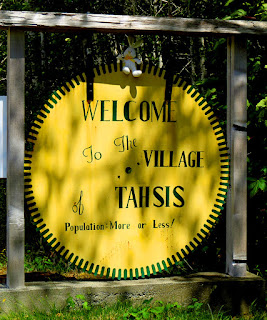 Entering the metropolis of  Tahsis 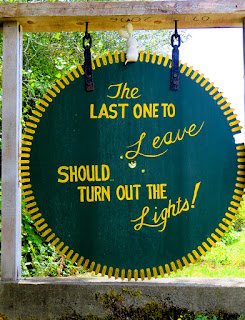 And leaving the non-thriving burg 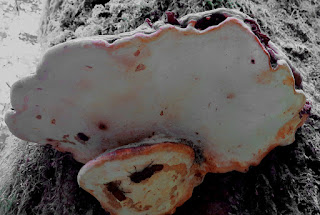 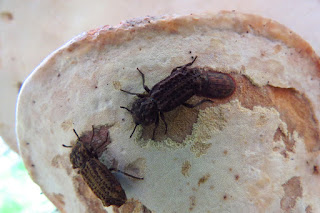 And here they are dining on the skin 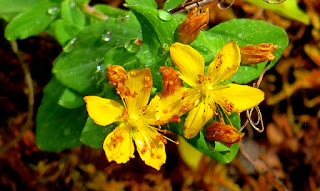 I believe these are St John's-Wort.  They were thriving in the spray from Lady Falls. 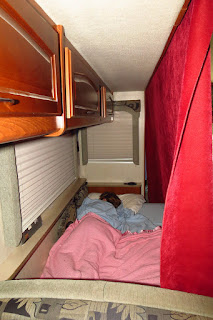 Here's Georgia asleep in her berth that we make up in the motor home using the couch opened out and a large hanging blanket to keep the light out.  Both windows are blacked out as well.  Proving that she is now truly a teenager, this shot was taken at 9:30 am. 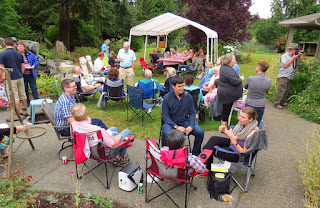 My sister in law, Sheila is just retiring as area governor for Toastmaster's so last night she and the incoming governor hosted a get together for all 22 Island clubs.  I was the person doing all the grilling on the BBQ.  There were many more attendees than are shown here so I was a busy fellow for a while.  Aileen was doing lots of work in the kitchen. 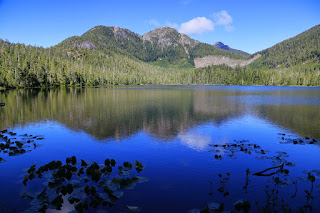 Bull Lake along the Tahsis Road where the Gentians were blooming 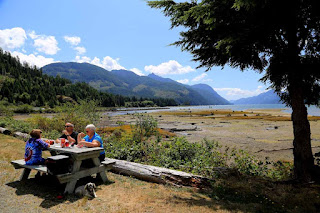 Having our lunch at the head of Tahsis Inlet 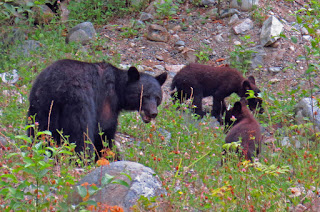 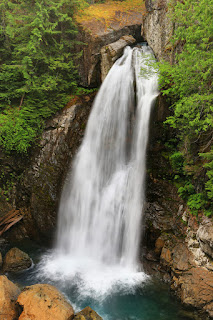 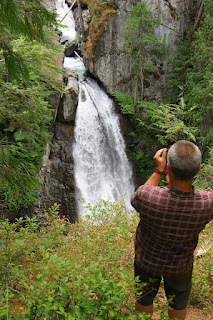 The last time we were here back in about 1976 this was all you could see of the falls.  Richard and I walked up just to compare the two views.  The new viewpoint is a real advantage! 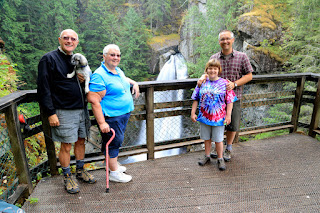 On the viewing platform at Lady Falls.  That's me and Mitzy on the left, Aileen, Georgia and Richard.
Posted by John and Aileen on the road at 7:29 PM