Jim brought his two wheeler over yesterday and we loaded it on my trailer first then put my ATV on.  They fit well together with room left over for various other items.   It would seem we will be on our own for a few days as Jacquie and Jim have run into a snag on their sale.  It seems Arizona now requires a certified copy of your passport if you’re a Canadian selling property.  Well, it would have been nice if they’d been told that earlier on in the process!  Today was to have been the closing but they are now in limbo until the copied passports arrive back from Canada.
I’ve had to do a bit of work on my ATV again.  It needed new front tires so I shopped around and got a pair ordered in Casa Grande.  When I removed the right front wheel, I noticed the brakes were worn badly worn on one side.  I managed to get a set of pads ordered at the local auto parts store and got them changed.  We went over to Casa Grande and had the tires installed on my wheels in a matter of minutes on Wednesday.
Aileen cooked a gluten free turkey for our ATV club December potluck which passes as a Christmas party.  There was a good turnout again and I was asked to take a group portrait.  I’ve been out on some club rides and Jim and I were out a couple times geocaching.  Since some of the caches were well spaced and others required more extensive walking, we didn’t get large numbers.
On Saturday, we and the Jordan’s went to Mesa and Gilbert.  Jim and I spent some time wandering about Harbor Freight (guys toy store) while the ladies went to Dollar Up next door.  We all came away with packages.  Next up was lunch at Five Guys Burgers which was a first for Jacquie and Jim.  Once again we had a good meal.  We sat outside where it was much quieter as they have loud music pounding away inside.  We had a table with shade for Aileen and sun for the rest of us and Mitzy was able to sit with us as well.


We’ve had a couple nights of card games with friends and this afternoon we are invited for supper with our Grand Junction, CO friends Ken and Marie.  Jordan’s will join us and another couple from Grand Junction we haven’t met yet.  Tomorrow Aileen and I head for the western side of Arizona where we’ll hang out until late January.  I guess the Jordan’s will join us when they get things settled with their sale. 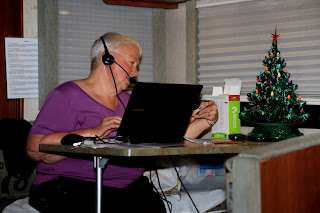 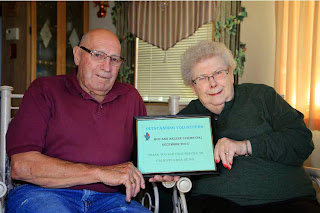 Our neighbours Bud and Arlene with their volunteer award which they asked me to take a picture of.  I gave Bud the image on a flash drive and that afternoon he gave me a nice Christmas card with the photo on.  He'd taken it to Walgreens' Drug and for $20 he got forty nice cards.  Click on the picture to enlarge and read the award. 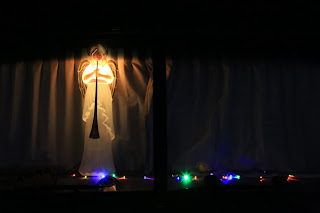 Our little attempt at holiday decorating.  Jacquie gave us the large angel as it was too big for them to take when they leave.  It fit our front window quite well.
Posted by John and Aileen on the road at 12:41 PM