We're still parked in Cousin Judith's driveway in the little village of Donnelly, Alberta.  we've been enjoying visiting with Judith and Doug and sharing some meals.  Judith is one of those rare people who can sit through hours of my photos so we've done that a few nights.  She'd gone down to Sylvan Lake to return her grandson and visit daughter Jill for a few days and now has gone back to work for the school year at the local high school.
Our plan is to stay here through the Labour Day long weekend then head for Jasper National Park on Tuesday, depending on the weather.  We hope to spend a week of more exploring in the Rockies before heading into the East Kootenay then later the West Kootenay.  I'm looking forward to some hot spring visits in the Kootenays.  After we finish up the Kootenay region, we'll return to the Shuswap until time to head south.  I did get around to buying our travel insurance this week so that is out of the way. 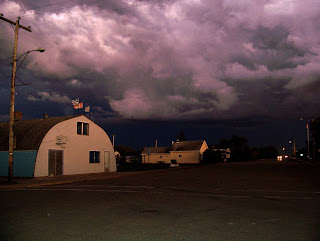 Taken last night with the old Kodak point and shoot digital which is why there is so much noise.  We were out for a stroll around the village with Judith and thought we were going to get wet but it didn't rain at all all night.  Shortly after making my post, I saw on the internet that Calgary and Edmonton were both hammered by a thunderstorm yesterday, so I guess what we saw was the edge of that storm!  Edmonton is southeast of us. 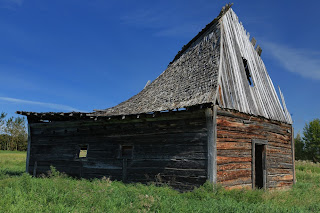 Spotted these old farm buildings while out geocaching the other day east of Donnelly.  The caches are mostly few and far between in this big country 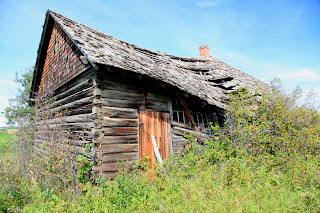 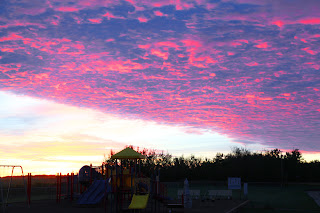 Sunrise out the bedroom window one morning this week 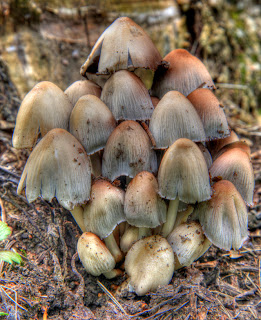 There were some mushrooms pop up in a couple old Aspen stumps across the street from us.  They only lasted a couple days and are now shriveled and mushy 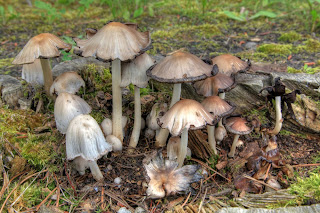 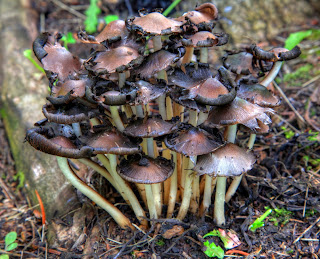