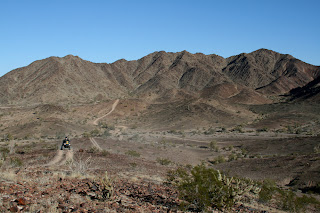 Jerry checking out some diggings 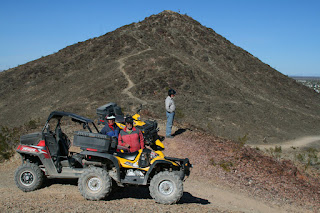 Jerry, Donna and Jim with the walking trail up Q Mtn in the background.  I must get up there before we leave as there is a geocache hidden near the top. 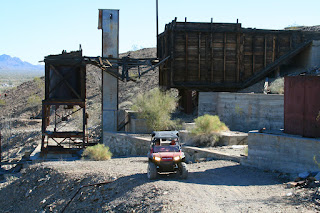 Jerry and Donna in front of some old mining relics

Friends Jerry and Donna and Jim and Judy from our ATV club in Florence are in Quartzsite for a few days and came by to visit yesterday.  They asked if I could show them around today.  Why, certainly!  I put together a 26 mile loop of trails I was mostly familiar with plus a few that I was sure I could incorporate in.  Jerry and Donna were the only two to make it today as the other two were concerned it might be too dusty for them.  I did the mountain part of my route in the reverse direction from what I did the other day as I thought it would make a better trip.  I did take one wrong turn and ended up a dead end draw but, hey, the scenery was great.  I was going to have our lunch stop at the Deere Run B&B, pictured in the last blog post, but there 17 Jeeps already there and it was noisy and crowded.  It was a powder puff Jeep rally so all lady drivers but most did have a man riding with them.  We moved a little down the road and had a very peaceful spot for our lunch.  We stopped at a couple of stone cabins on our way home then at a viewpoint for Jerry to get some pictures looking over Quartzsite.
Yesterday, we headed a little east and met Kim and Don who are camping with fellow Escapee members on the other side of the camping area from us.  Their link is on the side of my blog as http://kanddintherv.blogspot.com   Kim and Don are from northern BC, but summer in the Shuswap near Salmon Arm, our home base.  They are a friendly couple and we had a great time chatting.  They have invited us to their Escapees Spring rally and we hope to be able to join them in Merritt for it.
Jim and I did an afternoon of geocaching off to the south and west of camp on Saturday.  I took another turn around the RV show this afternoon and it wasn’t as crowded so more relaxing.  I found a couple small things that were on my list.
Posted by John and Aileen on the road at 6:38 PM