BOY WAS IT COLD FOR A COUPLE DAYS!

Monday turned out to be an indoor type day with really strong wind gusts coming right out of the frozen north.   I was only out to take Mitzy on her walks and the wind cut like a knife.  There was lots of traffic moving on the highway but not many pedestrians out and about.  Tuesday was a little less windy and today was actually pleasant.  We’ve been very pleased with how the little Mr Heater “Buddy” is keeping the motor home warm in the mornings and evenings.  I think we ran it all day Monday.  It gets downright cool in here still at night as we aren’t running any heat source and several mornings were down in the low 20’s F.   We haven’t run the furnace for about four days now.
Quite a few of the bloggers I read are actually here in Quartzsite.  I hope to meet some of them in person.  I met a couple of geocachers today when I was out and had a good chat with both.  One was very experienced and the other just started a couple weeks ago.
Aileen and I went to an afternoon music concert yesterday.  It cost us $5 each but there was two hours of music.  The main performer is famous as the naked book seller in Quartzsite.  In the 60’s, 70’s and 80’s he had a career as a naked blues piano player in the eastern US and Canada.  He plays a great boogie woogie type of music and has an interesting line of chatter to go with it.  He was accompanied by his childhood friend and former band member who could really play the harmonica.  He also had a great washtub bass manned by a career music sessions man who is in the Guinness book of records as the most married man.  He’s been married something like 56 times but it turns out each time was to the same woman but in different states and provinces.  He was joined on stage by an 83 year old country singer who did a great rendition of the Blue Boy Blues.  RV humour as a blue boy is what you can haul your RV sewage away in if you don’t want to drive to the dump station.  There was also a ten year old girl who joined in on a couple numbers.
Jim was working on a project so I went caching by myself this afternoon.  I met a guy at the RV Forum camp area and he gave me a couple of his path tags.  He also showed me his moving travel bug permanently attached to the back of his Jeep.  I logged all three tonight along with the seven caches I did find.  I also met Pedro43 on the hill above Rainbow Acres.  He told me about a new cache that was posted after I had gathered my info on this area.  He was looking for it and about the time he gave up, I finally found it.  I was about to give up too.  He has only been caching a couple weeks, lives in Las Vegas but has a place in Rainbow Acres right near where we were caching.  He also has a house on Nimpo Lake in the BC Chilcotin as do three others in Rainbow Acres he told me.   It was a gorgeous day out in the hills.
The camp area really started to fill up today.  Tonight the generator chorus is quite loud and obnoxious.  At least we aren’t having to run ours.  The next week will be the very busiest of the year for Quartzsite.  The big RV show starts Saturday but by the time it ends on the 27th, many of the RVs will have departed. 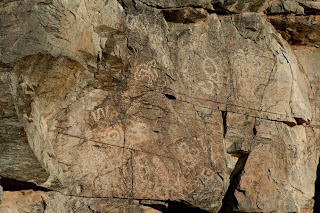 This was at what's called Picture Rock just southwest of Quartzsite 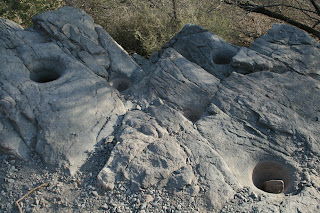 These five Mortero or Indian grinding holes are near Picture Rock. 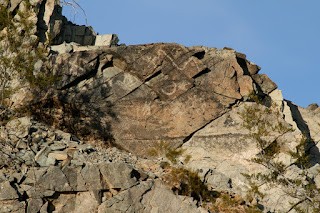 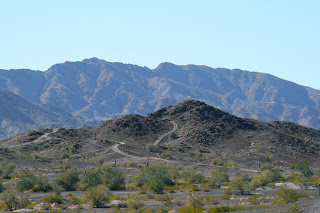 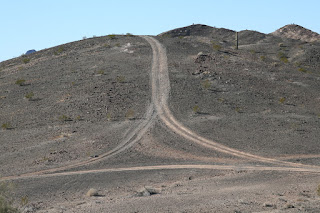 Interesting patterns made by the ATV trails 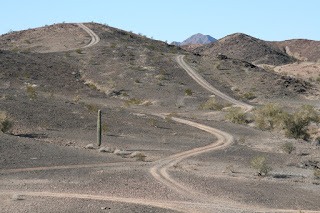 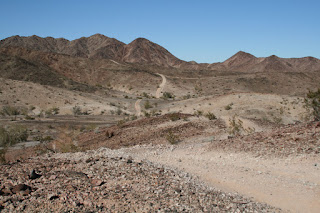 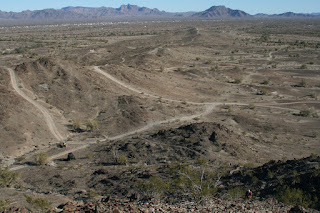 Looking down from the hill with the flag on top.  That is the second geocacher, who I met on top, working his way up the trail 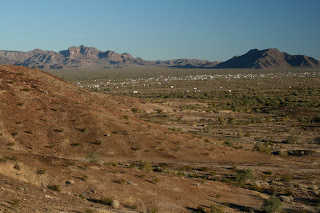 Some of the RVs parked in the desert to the south of us.  Quartzsite is out of sight to the left