One thing about coming south from Canada is that we get to enjoy two Thanksgiving feasts.  We got together with friends Ken and Marie yesterday for a great meal.  Aileen did the turkey outside the motor home in our electric roaster.   She made gravy, real whipped cream and pecan pie.  Marie did buns, salad, veggie tray, potatoes, sweet potatoes with marshmallow topping, green beans and mushrooms and pumpkin pie.  It was quite a feast and I probably missed listing some food.
After we stuffed ourselves, we played a new game to us called Sets.  We played something similar with Charlie and Sheila last spring.  I was score keeper which didn’t keep me from last place both games.  Marie was big winner both times with Aileen second.
I rode Monday and Tuesday this week but don’t expect to get out until next Tuesday now.  I think Tuesday and Thursday will be my ride days from now on.  I’m trying to drum up interest in a ATV geocaching group so that may change things yet again.
Aileen and Marie went to Casa Grande to check out Black Friday sales but didn’t buy much.  They did get a chip repaired in Marie’s windshield.  Ken and I went for a drive through the Florence Kelvin Highway.  We did a few geocaches along the way and enjoyed lunch overlooking A Diamond Wash.  We drove up #177 to Superior then back via Florence Junction.  The weather continues sunny and warm, some of the team would say very warm!  It does cool off at night, though.
We took a drive up to the Phoenix area Wednesday and that was interesting.  I spent some time in Harbor Freight which is a real guy’s toy store.   From there we went to Bass Pro which is similar to Cabela’s.  The store is huge and has everything you can imagine for hunting, fishing and camping plus a lot more.  They have a large fish tank which you can sit in front of.  You also see it through the glass walls of the elevator which is pretty neat.  They also have a lot of boats on display and they are an Arctic Cat ATV dealer with lots of those machines scattered about.  A person could spend the whole day wandering around the store and there is a large fish restaurant integral to the store. 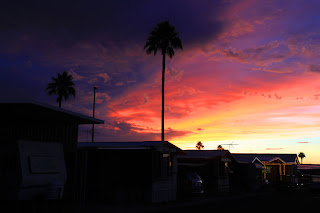 Sunset down our street the other night 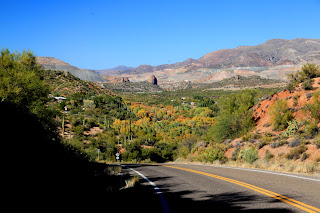 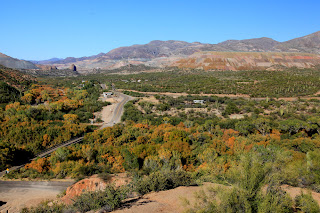 The main road through Kelvin, AZ 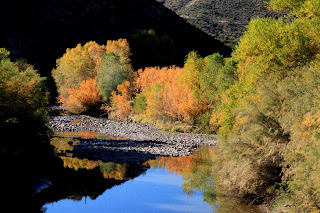 The Gila River from the Kelvin bridge 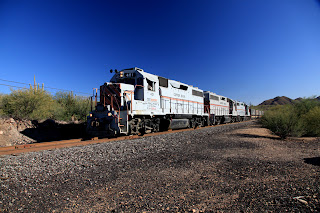 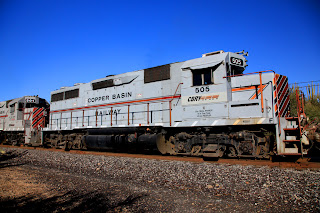 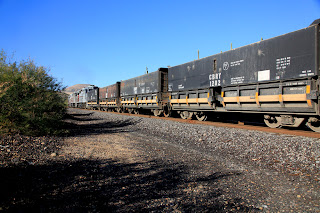 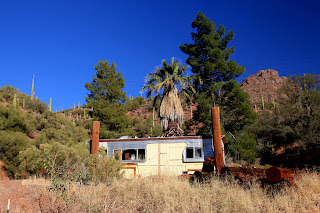 Somebody's dream went sour.  This is an old Class A motor home with an abandoned house in behind