BACK TO SUMMER AGAIN

This is the warmest November we’ve had since we started coming south.  The temperature is getting up in the high 70s to low 80sF every day.   It does cool off nicely at night for sleeping.  It is very dusty out ATVing so I keep as far back as I can from the ATV front of me.   The only problem with that is when you get a worry wart in front of you who keeps stopping when he can’t see you all the time.  Then, when he takes off again, you’re so close you get dusted.
I went geocaching from the park on my bike yesterday and found five.  I was unable to locate four others.  Two of them claimed to be associated with rusty fenders but when I went to the location, there was no fender anywhere in the vicinity.  The other two had been recently found so I will have to give it another try.  I haven’t gone back to the Florence Kelvin Highway since last Wednesday but I have been entering the co-ordinates in my GPS as time allows.  I have enough entered to go do another day trip out there now.
I was mentioning about my bike problem in the last post.  I finally googled bike repair shops in the region and found one in Casa Grande.  I gave them a call on Saturday morning and he said bring it right over.  As soon as I walked in with the bike, he pulled the one he was working on off the bench and put mine up and started adjusting.  He told me it was just out of adjustment and he’d fixed it.  When I took it for a spin around the parking lot, it was still slipping so I insisted he try it.  Fortunately, it slipped lots for him.  It turned out my gear hub assembly on the rear wheel was broken.  When he removed the wheel, gears fell out and rolled all over.  He charged me $10 labour and $16.99 for the part.  Total bill was $28.64!  I’d almost decided to buy a new bike so that saved me lots of money.  I would heartily recommend Round Trip Bike Shop to anyone needing bike service.
Our ATV group has changed the Saturday ride to Monday now as the weekends are getting so busy out where we ride.  Only nine riders out this morning and for the first time I can remember the side by side models outnumbered the regular ATVs five to four.  This may help to keep our numbers down and more manageable as many of the riders have other commitments for Mondays.  I think some of the members will still ride Saturdays so now there are rides going four days of the week.  I think I will ride just Tuesday and Thursday although this week I will ride today and tomorrow as Thursday is a holiday so not many will ride, if any. 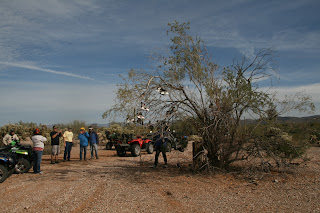 Out in the desert, we have an ice skate tree 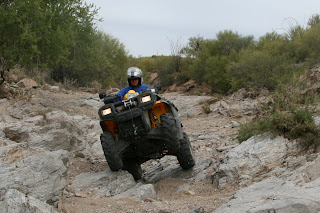 
This neat rock was right beside where I stood to take my pictures.  Can you see the little cactus plants at the top? 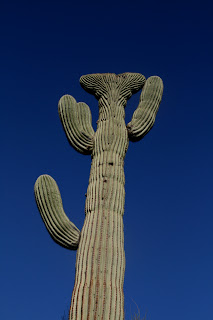 I spotted this crown (or crested) saguaro on today's ride.  Both leaders hadn't noticed it before 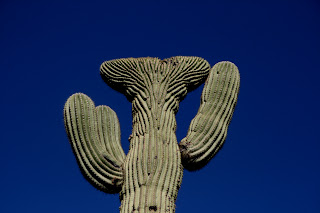 This is called the waterfall and while we managed to find another trail around it, three of the guys did go up and down it but the group didn't.  This is Dave going up 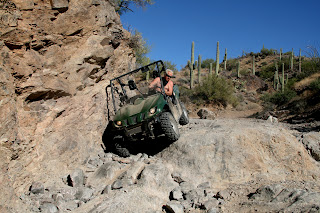