I went down to Errington last Tuesday to help brother Charlie get his hay in.  I stopped in Campbell River to have fish and chips out on the pier and the cod was excellent!  The plan was to bale on Wednesday but it wasn’t dry enough until Thursday after lunch.  There was just Sheila and I to throw bales to start with.  We did enlist the renter’s thirteen year old daughter to drive tractor for us.  She had never driven anything before but she picked it up quickly.   I rode with her for the first little bit then she did fine on her own.  Part way through Sheila managed to get a teen aged boy to come and work and he was a real help.  I managed to visit two of my siblings, Wendy and Janet, while I was in the area.
I came home on Friday for a rest.  We had to go into town for groceries after supper so Aileen took the opportunity to have a tub bath while I watered Anne’s flowers.  Saturday was a quiet day of rest until after supper when Aileen thought we should run out to Klaklakama Lake to see John and Anne and the kids.  We grabbed old John, a full time resident in Cluxewe and he enjoyed the outing.  We took a drive Sunday afternoon and took my good camera out to a waterfall I had seen while ATVing and I was able to improve on my photos from the other day.
We should be having our granddaughter Georgia staying with us starting this Thursday for most of a week.  Aileen is really looking forward to spending time with Georgia.
Brother in law John’s back is still bothering him so there hasn’t been any ATVing.  In fact, last Monday I took my ATV to town and gave it a good wash then brought it back and covered it up.  It has been very dry here lately which is surprising given the wet weather the interior of BC has been getting.  It is usually the other way around.  While the interior of the province is suffering deadly and expensive mudslides, we are covered in dust.  Not complaining, mind you.  We’re even having sun all day without the normal morning fog.  The temperature is into the high teens Celsius, which is approaching 70F here at the beach and is much warmer the further from the water you go. 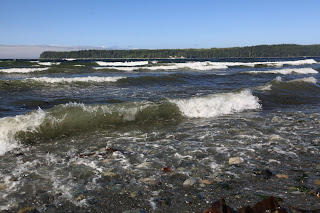 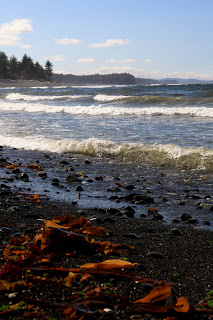 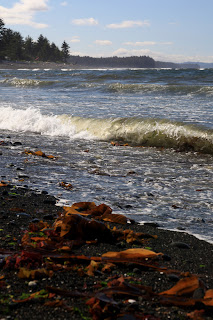 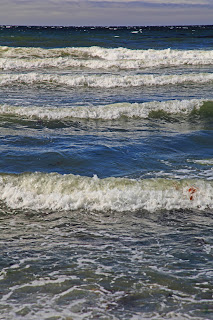 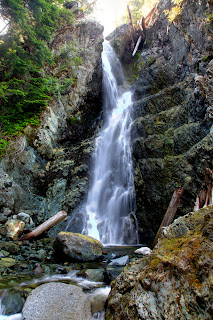 This pretty waterfall is nearly hidden from the road.  I just glimpsed the top little bit while driving by 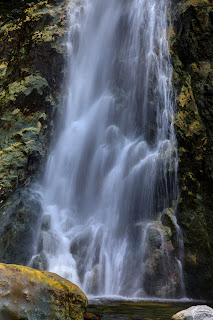