The title pretty much sums up our last few days.  Our granddaughter, Georgia came to visit last Thursday along with her Dad.  The next morning I took Richard and his friend David to Port Hardy to catch the boat to get to the North Coast trailhead where they are currently hiking.  They are supposed to finish their hike tomorrow with my picking them up at the Holberg end.
Ours days have been pretty full having Georgia with us.  John and I made it out geocaching a couple times.  We finally took the ATVs out this morning for the first time in a while as John’s back was pretty sore for a few days.  I took Mitzy with me in a box on the front of my ATV this morning.   She really enjoyed the outing.  We found a trail down to a remote beach near the end of a logging road and Mitzy has great fun running through the puddles on the beach.  She and I managed to get quite close to a Kingfisher on the beach.  I haven’t downloaded the pictures yet so I’ll include a shot next post.
Georgia’s cousin’s Nikki and Travyn hosted a surprise belated birthday party for Georgia the second day she was here.  It was quite funny as Georgia kept saying you can’t have a party since it is not my birthday.   However, she did get into the spirit of the party later, especially when the cake and presents appeared.
Last Wednesday, the night before Georgia came, Aileen suggested going for a drive after supper so the four of us piled in the car and went first to Telegraph Cove.  We drove around both campsites.  We’d stopped and checked out Alder Bay on the way down.  Then we drove up West Main to Ida Lake.  Now there is a rough road.  We decided we would definitely not take the motor home up there.  When we got to Ida Lake, darned if there weren’t two motor homes camping there.  One had snuck up Kokish Main before it was closed and the newer 36 footer had come over the same road as us.  He came rushing out and asked if there was another way out.  We told him about going around the top of Bonanza which is what we were doing.  It was 31 kms from Ida to the highway at the Zeballos turnoff but much smoother.  However, it was still a long way.  It was just past 10:30 when we got home. 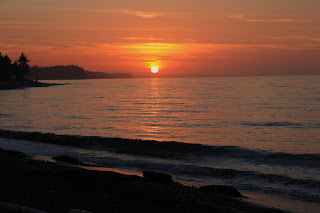 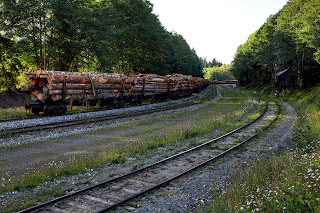 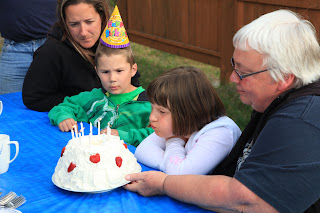 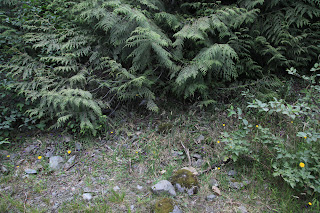 This geocache had us fooled for some time.  Finally after being defeated several times, we found it in that stick in the center of the picture 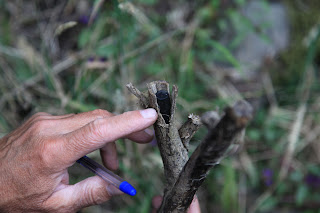 How's that for tricky?  The person who set the cache drilled out the end of the branch and slid the little canister inside 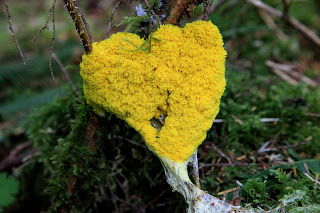 The yellow fungus that is fairly common in this area.  It only lasts a day or two then turns mushy 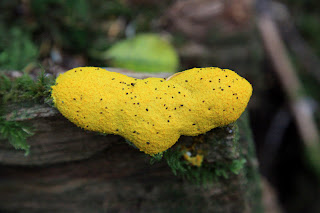 This one had a bunch of little flies stuck on it 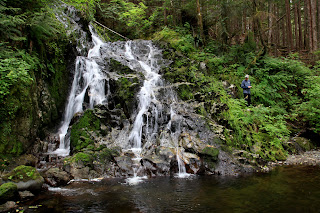 John getting some elevation to see if the GPS would work better.  The cache has to be around here somewhere.  We still haven't found it though

Posted by John and Aileen on the road at 2:47 PM