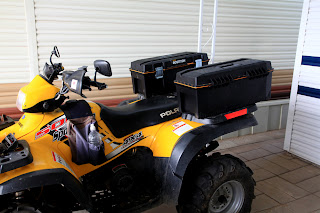 I put on four loads of laundry Sunday morning first thing then took Mitzy to the dog park.  I managed to have breakfast and a haircut by Aileen while the clothes were in the dryer.  Then I took Mitzy for our walk out back.  Aileen didn’t go to church but rushed around on various projects.   She worked up a little blurb for Marie about the Colorado dinner.  She worked on revising the Colorado poster for Marie as well.
I had purchased two large toolboxes from Lowes and finally figured out their placement on the ATV then enlisted Ken Mackley’s help to get it done.  I am very pleased with how it looks and hope it works as planned.  I took it over to show Scotty as he was thinking of getting one for his.  It took me awhile to get everything cleaned up and I vacuumed as well since I’d made a mess drilling the plastic and there were a lot of feathers and seed puffs on the carpet from the recent wind.  I also put the motor home awning out to dry.
I went to the second half of the Sunday jam and there was some good music played and sung.  I grabbed the vacuum and cleaned all the Annex carpet as soon as they were finished.  Linda and Arnie usually do it but they didn’t appear so since our Alberta friend’s party was up next, I just got at it.  We had a good visiting time.  Aileen sat next to Maxine who lives at 311 Ocotillo.  They hadn’t met before although I’d met her and her husband several times.  In fact it was from them I borrowed the 2x6’s we used to lift the RV cover.  There were snackies then pizza and Caesar Salad and a lot of laughs.  Our friends are going back to Alberta for Christmas then they are off to their time share in Mexico for the rest of the winter.
I went up to the clubhouse at 9 am Monday and bought Canada supper tickets for Jordan’s and us.  Aileen went to the meeting then helped some of the clowns package up presents for the disadvantaged kids they support.  She came back about noon and got me to help load our car and Phyllis’.  I had stayed home all morning to put the turkey in the roaster at the prescribed time.  That went well, but I forgot to turn off the turkey neck on the stove so the pot had boiled dry when we returned.  Luckily it was all salvageable.  Shortly after four pm it was time to take out the turkey and it was very well done which made for hard slicing.  There were about 52 ATV people at the potluck.  We had a surprise appearance by Santa and I got some good pictures of some of the ladies (and guys) with him.
We had 1.5 inches of rain over Monday and Tuesday, according to Daryl’s rain gauge so we spent most of our time indoors.  Tuesday definitely wasn’t an ATV day.  We lay abed a little later than normal since it was darker than normal.  Aileen went to the board meeting.  Mitzy and I stayed home and waited for a lady to bring Aileen’s new bib and apron over.  Sue (I think) didn’t seem anxious to go home and back to work so I showed her a few slides and a show on my computer.  We had a good chat.  Aileen was pleased with both items when she got home.  She had admired the lady’s work at Country Store in the clubhouse last Wednesday and the lady said she could put any of her patterns on an apron.  She didn’t do bibs so Aileen took her old one over as pattern and now the lady has a new line to work with.  Nobody seems to sell bibs here, which is surprising.
Kathy Richardson (filling in as block leader since both our leader and alternate aren’t here) came by to see if we wanted luminaries, while Aileen was napping.  Aileen went just down the next street for a haircut at 3pm.  She’d mailed her last Christmas cards in the morning on the way to the meeting.  She also dropped off the little Colorado Dinner notices to Marie that we’d done up the other day.  I was appointed meatloaf maker for supper.  It turned out fairly well, I guess.  Aileen cooked veggies to go with the left over mashed potatoes from the potluck.
Last night, I did the pool inspection about 7 in the rain and the pools were 88, 89, 95 and 95!  I doubt it even got up to 50F yesterday.  Talk about wasting energy.  We went to pool 1 and it was very nice, in fact, almost too warm at 88F.  It poured on us most of the time which just helped to cool us a bit.
The weather has improved for us today and it was quite pleasant in the sun for a time.  Mitzy and I got for our walk out in the desert.  She was eager to run today after being cooped up for two days.  I took pictures for Betty who we bought our trailer from as the ones she had done had a nasty colour cast.  I tidlied them up in PhotoShop then took them over on a thumb drive so she could make prints. Next I went to help Patty on the street behind us as she couldn’t figure how to send an attachment from her new email program.  It took awhile but I finally spotted the button for it.
Aileen jut remembered a few minutes ago that we have the ATV happy hour at 4 pm.  I’d forgotten as usual.  She also came out with the exciting news that Richard and Georgia are coming on the 26th until January 2nd! 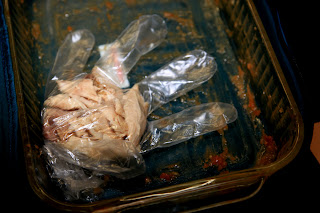 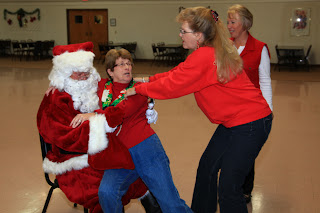 Come on, its my turn 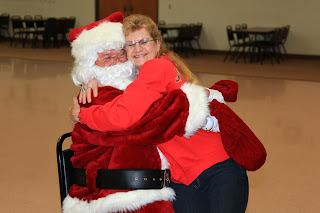 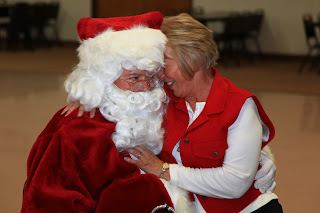 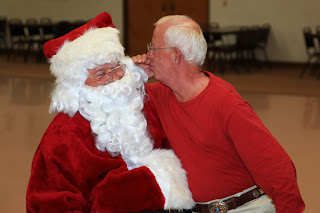 Dennis is asking for a new quad 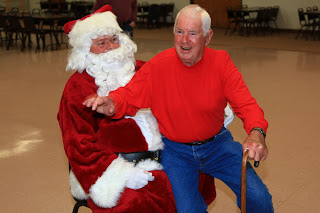 Here's our grand old man Blue who, at 82, rides three days a week 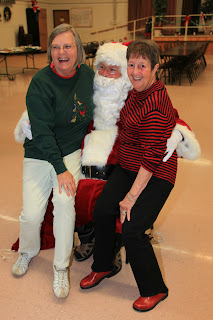 Karen, Dennis' wife and Ruby who is Blue's wife 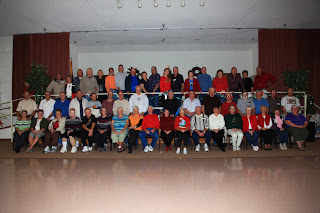 Posted by John and Aileen on the road at 1:48 PM