We got to the airport over an hour early on December 26 to pick up Richard and Georgia  so we were able to leisurely find our way in.  I was able to move the car way closer than we first parked as well.  I took my book and read.  The plane was pretty much right on schedule, so we were in the car and moving by about 10:30 or shortly after.  I think we were home shortly after 11:30 pm.
Richard finally uncovered Georgia to wake her the next morning when it seemed she would sleep all day.  Aileen made us pancakes for a late breakfast then I took R&G and Mitzy for a walk out back.  We put on about two miles.  After lunch had settled, we went to pool 2 for a couple hours.  The pool was at least 87F.  It was warm enough to stay in for an extended period and of course felt really warm to R&G since their backyard pool has no heat.   I read for a while but the wind was cool.  I finally moved to the hot tub and read there for a time before putting the book aside and getting fully submerged then hopping in the pool.
There was just a touch of frost Wednesday morning.  I only saw it on a couple of vehicles that weren’t parked under cover.   The past few days had mostly seen a harder frost.  I took Mitzy out for a walk since R&G hadn’t appeared by 9 am.  I called Aubrey H and lined up a ride for Richard for Thursday.   Later, we all went to Casa Grande after a car wash in Coolidge.  We managed to drive by a couple of cotton gins so Richard could see the large number of bales awaiting processing.  Since it was already noon when we got there, we had lunch at In and Out.
We went to Ross’ Dress For Less looking for a swim suit for Richard but none in stock.  We managed to find one for him at the Outdoor Store by Best Buy.  We checked cameras at Best Buy, Radio Shack, Target and finally he bought one at Walmart.  After a few more stops here and there, we finally got home and went to pool 3.  Georgia had been nagging all day about swimming.  By the time we finished, it was time to come home and barbeque sausages for supper.
There were 20 ATVs out Thursday with 24 people as we had six side bys.   We had a good ride but it was quite dusty.  We wandered around quite a bit then finally got to the Ajax Mine for lunch.  After, we went above the mine and circled around to the right toward the Thumb then almost back to Ajax .  It was a good trip for Richard as it showcased a lot of our riding territory.  I think he enjoyed his day with Aubrey.  I had Aubrey take Richard to Dick’s place on the way home as he was looking for help to load his CanAm which wouldn’t start.  When we got there, Peg came out and said Dick would be late as Dennis’ new CanAm was broke down and being towed in.  The four of us there went ahead and got it loaded anyway.  I had a call from Dick later thanking us.
On Friday morning, I walked Mitzy over and around the Florence Garden’s storage compound then A, R & G picked us up and we went to Coolidge.  Richard took his camera into Walmart and traded it for a better one.  The first one had little blades that opened and closed when turned on or off and they sometime stuck causing vignetting.  The new one has a lens cap and a more powerful zoom.  We filled the water jugs and got a few groceries at Shopes then visited my sister Wendy and Randy for a few minutes.
It was lunch time when we got home so we got at that.  Later while Aileen napped, I took Richard and Georgia out to Box Canyon in the car.  We walked up the little side canyon then up the Box part way.  It was very busy out there with all sorts of vehicles.  It was supper time when we got back.   I downloaded my pictures after supper and edited a few.  I mostly shot HDR.   I definitely got different shots than I’d get when out with the ATV group.
I took Mitzy to the dog park this morning.  I’d stayed in bed until Aileen started feeding her then got in motion so I was in time to take her.  I loaded the car after Aileen packed us a lunch.  When R&G were ready we hit the road.  Gassed up in Florence then stopped at the Greek Monastery.  Next stop was at Biosphere 2 where Richard was hoping to get an overview but it was too well hidden.
We made it to the Winkelman community park along the Gila River for a leisurely lunch.  We stopped at DQ in Globe after walking through a flea market where I bought some fuses and slip joint pliers.  I went to pool 3 with R&G after unpacking the car.  It wasn’t too refreshing since it was 92 and the hot tub was 102F.  Georgia thought it was great of course.  The pool was a dominant subject on our road trip today.  We drove about 300 kms.
Aileen and I wish you all a healthy and happy 2012! 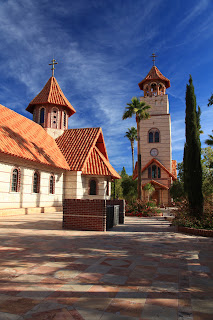 One of the chapels at the Greek Monastery 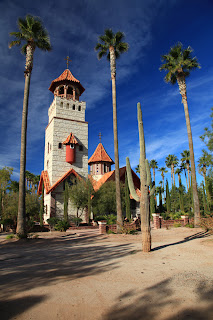 A view from the other side 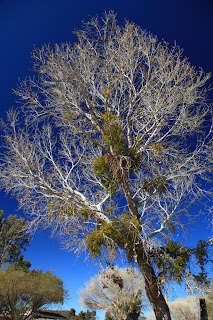 The only thing green on this tree is the parasitic mistlestoe 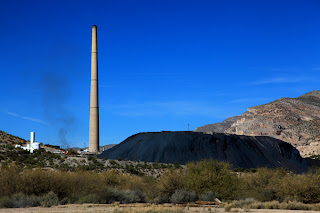 A tall smokestack in Winkelman, AZ 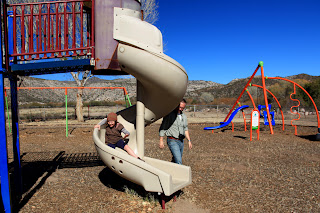 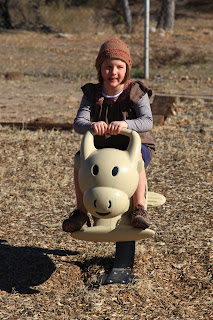 She tried out being a cowgirl 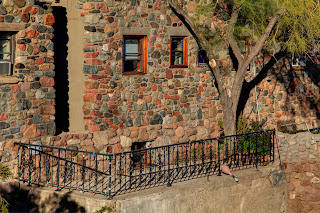 A stone motel in Superior, AZ 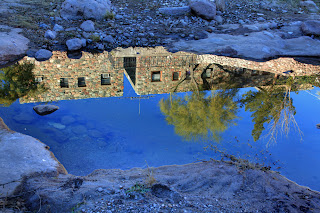 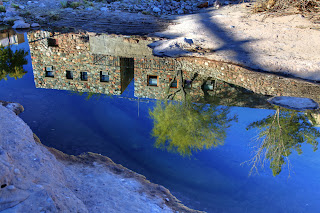 A couple of shots of the motel reflected in Queen Creek