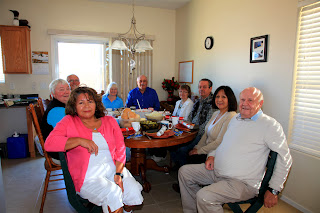 Port Alberni couple in the front, her sister second on right, Jim and Jacquie back right, Wendy and Randy center and Aileen and I on the left 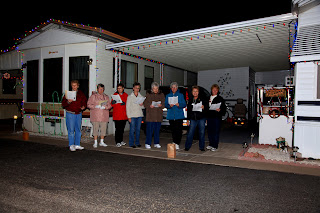 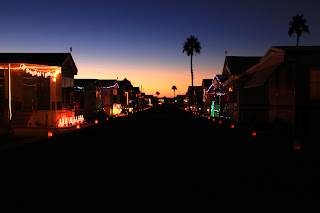 Looking west down our street. Our place is on the right with the blue lights 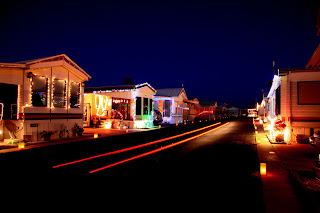 Looking east down our street. Our place on the left, has the bluish lights.  A golf cart went cruising through giving the streaking tail lights

Best of the Season to All!

Life continues at a rapid pace for us.  I have been ATVing several times.  I spend half an hour in the morning and again in the evening walking to all the swimming pools recording the temperature.  Certain people have been trying to discredit my data by saying all the pool thermometers are broken, so I bought my own and record both temperatures.  We’ve been to Casa Grande a few times and I’ve been to Mesa and Apache Junction twice in the past week.  Yesterday, Jim J and I went to Harbor Freight which is a guy’s toy store with lots of discount tools and things and Home Depot.  I managed to spend less than $10.
My old friend Ken (82) and I shimmed up the pipe sleeves which raised the RV cover higher.  We used a come along and my ATV winch to pull the top of the pipes over then jammed some large spikes in to take out the slack.  With the very strong winds we had, the roof was bobbing and dipping a lot, mostly because of the slack created by the difference in pipe size.
A week ago Saturday, Ken M and I went out to the diversion dam just before two pm.  I was about to head home again when Aileen called and said there was no rush so we carried on to the turquoise mine and wandered around a few trails there.  On the way home, I stopped Ken at the seven mile rail crossing to remark on the fact the wind had changed totally (180 degrees) on us since going out.   While we were chatting, Jim E (an ATV friend who was riding with the main group that day) came roaring around the corner and past us.  As we idly watched him disappear, I had the impression I’d seen him up on two wheels, then we didn’t see any more dust so we got down there asap and sure enough he had rolled off the corner by the big puddle.  He was trapped under the upright ATV with his full face shield helmet hooked in underneath the machine.   Ken and I were able to lift the ATV up enough for Jim to crawl out.   He complained of a sore shoulder and seemed a bit confused.  We gathered up all his belongings which were scattered around pretty good then I drove the machine back up onto the road and Ken helped Jim get up further along.   The only damage I could see was a broken lid to the tote box and the right side of the handlebar bent down.  He was very lucky!  I don’t know if the others in his group following would have noticed him over the bank as they would be watching the puddle.   Later, it was determined he had broken his collar bone.
I was lucky enough to sell the framed print of the Old Mercury Truck as a Christmas present.  Many had admired it but none had room to hang it or the money to waste.  I went to the last two music jams in our park.  The group surprised Wendy on her birthday by calling her up to the mike at the start of the break, then we all sang happy birthday.  She was quite surprised.   One of the ladies brought a nice big decorated cake for all to share.
Aileen contributed quite a bit of time to the Caliente Clowns and their mission to make Christmas a little cheerier for some of the local disadvantaged children.  She helped sort and organize gifts and also went to one of the events where things were distributed.   We delivered a carload of food and gifts to the second event which was on Dec 23.  This had been donated by our block herein the park.  We’re continuing to type articles for the park newsletter as well.
We went to my sister Wendy and Randy’s for Turkey lunch today.  We picked up my Aunt Jacquie and Jim on our way.  Wendy and Randy had another BC couple from Port Alberni and the wife’s sister from Victoria over for lunch with us.  The couple bought just around the corner from Wendy.  It was a large delicious feast and there were lots of leftovers.
Tomorrow will be a long day as Richard and Georgia fly into Phoenix at 10:19 pm so it will be about midnight when we get home. 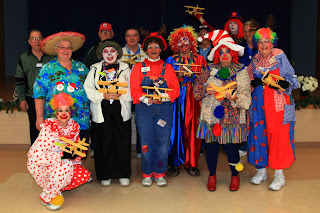 Some of the clowns and the guys who made model airplanes for the kids.  Aileen with the big hat 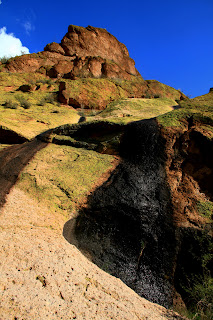 Some of the beauty in Box Canyon 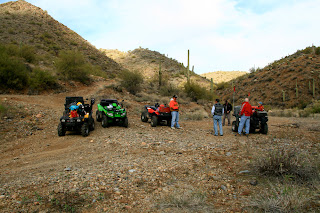 Lunch spot on an ATV ride 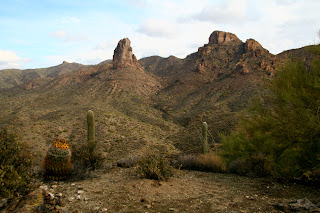 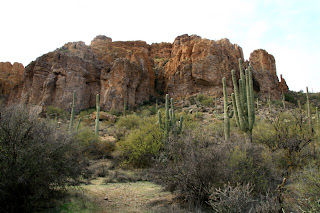 Some interesting bluffs along the Martinez Mine Road 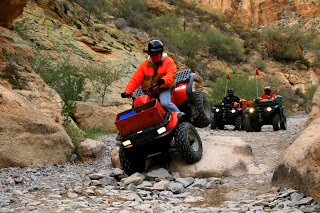 One of the rock obstacles in Box Canyon

Posted by John and Aileen on the road at 3:32 PM