A driftwood stump along the ocean 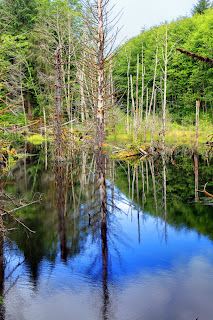 A quiet swamp in the forest 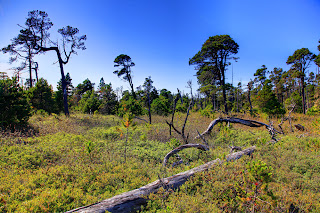 I went for a walk in what I call the Bonsai Bog.  It appears much the same as when Aileen and I lived here over forty years ago. 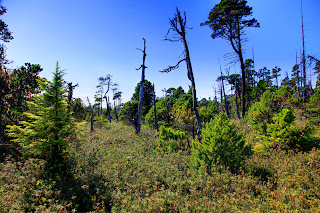 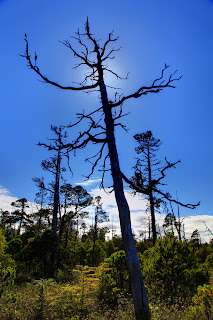 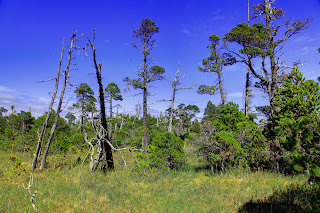 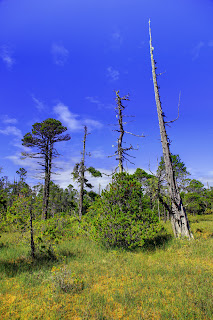 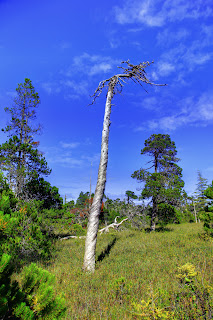 The time is flying by and we don’t seem to have enough hours in the day.  I’ve been doing a fair bit of strolling around, mostly with my camera.  I spent one morning backing up or moving files to my external hard drive.  Brother in law, John and I went out on the ATVs Friday, Saturday and Sunday to the same general area.  We drove about 37 kms up a logging road near Cluxewe then wandered up various roads.  Many of the roads John originally laid out when he was a logging engineer in this area.  Now some of them are so over grown they’re impassable even with an ATV.  Several others have been badly washed out or covered by landslides.
This area has been a multiple use natural resource extraction location for many years.  Forty years ago, when Aileen and I lived up here, we used to fish Maynard Lake which was a man made lake for the Benson Mine that produced iron ore and copper in two separate locations.  The mine has long since been abandoned but the area has now been extensively logged.
The whole area has a lot of limestone and is riddled with caves and other underground passages.  The Vanishing and Reappearing River is just one of the many interesting landforms to be found.  Some of the cave systems are very long and complex.
One of the roads we travelled Saturday had two mudslides blocking them to traffic.  After some study, we were able to find a route through both which gave us some challenging riding.  This is slow and cautious rather than fast.   Yesterday it was washouts.   John stopped at a cave he remembered from back in the late 70s or early 80s. Back then he’d rappelled down into the cave with Pamela Martin and the CBC News crew.  It is called Minigill Cave and was found by a loader operator who lost a boomstick (choice logs about 60 feet long which are tied end to end with chain to encircle bundles of logs in the water) into a hole in the ground. Minigill is a vertical cave which goes down to a river flowing crossways well below ground.
We have had a nice campfire every evening where we spend several hours sitting and visiting.
Please note, there are three more photo posts below that go with this post.
Posted by John and Aileen on the road at 3:32 PM