SETTLING IN ON THE ISLAND

The newest member of our team - the trailer
Things started happening quickly this trip.  On Thursday, I bought a small trailer to haul my ATV with the Honda CRV.  I got the trailer licensed and hauled the ATV around a bit to see how it handled.  I was satisfied with how it all rode.  On Friday, I took the ATV to the dealer in Courtenay to get a new key programmed.  It only came with one key and Aileen has been suggesting that it would be a good idea to get a spare.
I ordered printer ink from a company called 123Ink that was to be compatible with my large Canon 9500 Pro but when I made prints for the Salmon Arm Fair last week the colours were really bad.  I finally managed to talk to a person on Friday and she asked for some scans to show the problem.  I took the 13x19 inch pictures to the local business store and had the scans made and emailed them off.  I have asked for a full refund.  The lady tried to tell me to use the other eight inks and I told her there was no way I was ruining any more expensive 13x19 paper.  I don’t know how this refund process will work out.  I may have to involve my credit card company to force the issue. 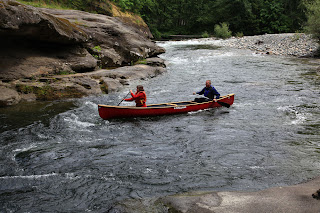 Sheila and Charlie casting off into the mighty Englishman River
Mid afternoon Saturday, I went with Chas and Sheila to be shuttle driver so they could canoe Englishman River from top bridge down to below the old highway.  It took them about an hour but the river was lower than they expected so some wading and lining was required.  Somewhere along there Chas managed to poke his left eye with a stick or branch.  Sheila took him to the local walk in clinic but they had to go to Nanaimo emergency since the clinic was too busy or something.  He scratched his eye so has to keep it shaded and put some ointment on.
Mitzy and I walked up to my sister Susan’s after supper Saturday night.  I had a good visit with her and John and a tour of the property and gardens.  John and I are hoping to get out on the ATV this week.  His brother also would like to join us with his machine. 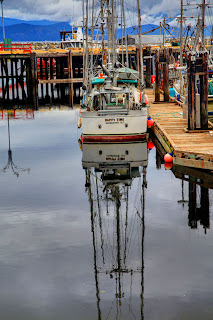 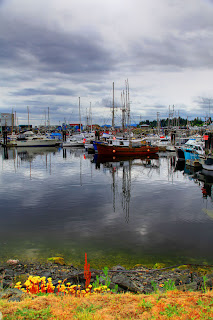 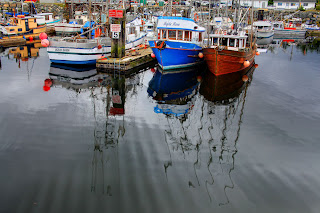 French Creek Boat Basin
I spent some time at the local boat harbor this morning.  Lunch was at Sheila’s mother’s and it was large group who enjoyed the varied dishes.  I left early and went to Qualicum Beach to take in the annual car show.  There were over 600 vehicles on display but so many people that it was difficult to do much for pictures.  Though it looked ominous at times, the rain did hold off. 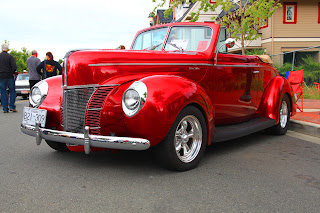 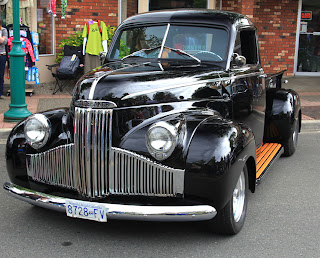 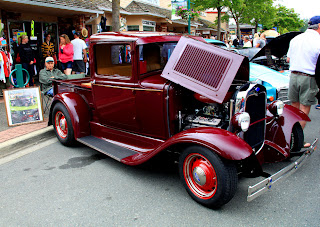 I don't know why this car owner was looking so grumpy 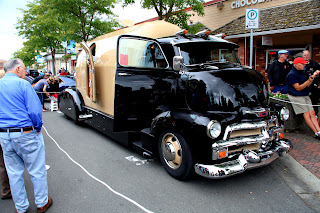 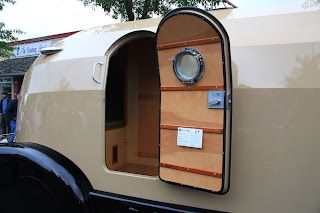 A peek into the master bedroom 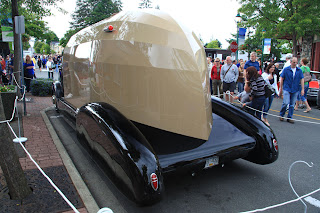 There's a tag axle under those big fins

I had a Father’s Day card from Bev that she sent with us last Sunday and Richard and Georgia called late this afternoon.  He was excited about his upcoming departure on Tuesday for Bloomington, Indiana for a large conference in conjunction with his university teaching.
Howard (RV Dreams.com) whose blog I have followed for at least six years reported that their good friend’s 5th wheel caught on fire as they were driving today and was totally destroyed.  They managed to unhook the truck but couldn’t save anything else.  Ed and Marilyn whose blog, The Happy Wanderers, is one I follow sporadically, have been full timing since 2006.    Ed and Marilyn used Howard and Linda as their main resource when they started planning to go full time as have many others.  Fire is an ever present threat with RVs since once a fire starts, it is usually impossible to get it out before the unit is destroyed.  RVs burn very quickly.
Posted by John and Aileen on the road at 7:11 PM