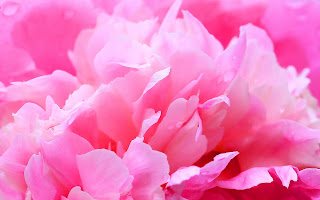 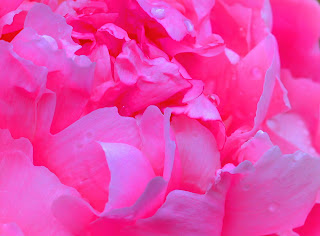 These top two are peonies
The next batch are poppies 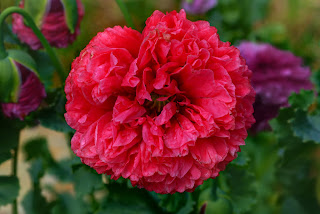 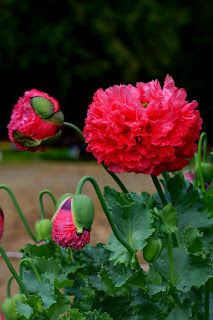 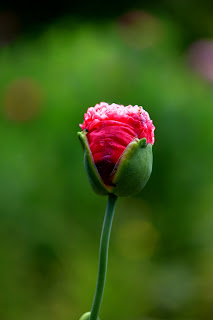 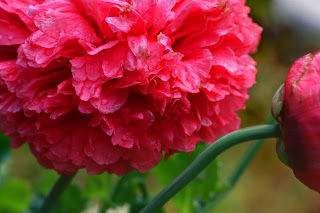 Aileen cut my hair Tuesday morning then went off for her hair appointment.  I thought that would be a good time to take the bathroom taps apart and lubricate them since the squeak and stiffness were bothering Aileen.  That part was easy (no squeeks) but the sucker leaked out the nozzle when I reassembled it.  I went to Access RV but they didn’t have the parts.  They sent me to Home Hardware who sent me to Andrew Sheret.  I finally got a little repair kit for $2.07 but it didn’t work; in fact it was much worse.  Next I decided to replace the taps.  Cheap crap the same as we had was $37 at the RV place so I got a good quality metal one at Andrew Sheret’s for $54.  Aileen was so pleased with that she wanted the kitchen one replaced too.  It eventually got done after two more trips over to the plumbing store.  So, in the end it cost well over $400 to repair the squeak in the bathroom tap!  I have to admit the new taps certainly look much better than the old ones.  While we had the motor home torn apart and tools scattered all over, my sister Janet (and John) came visiting.  Pretty soon Charlie joined us then he called Sheila over when she came home so we had a good visiting time.
Aileen and I helped with Charlie and Sheila’s yard sale on Saturday.  I put signs up in strategic locations then removed them at the end of the day.  I put my photo cards in and managed to get rid of a few.  I even put our old kitchen taps in and got $5 for them!  I wandered around taking flower portraits in the late morning but I had to contend with some wind so not as easy as I would have liked.
Yesterday we wandered down to Duncan.  Aileen checked out a church while I went to visit my cousin Neil (and Carol).  We had a good chin wag then it was time to go for Aileen.  After lunch we went back to Neil’s and I took pictures of old family portraits and papers while Aileen got to visit.  Neil’s father was the youngest of eight in my Dad’s family and Neil has inherited some of the family history from his effects.  Neil kindly offered us a parking spot for the motor home in his yard so we plan to take him up on it tomorrow.  Mitzy was to go to the vet last Saturday but they had two emergencies and rescheduled for tomorrow.  I got a call this afternoon asking to reschedule again as the vet had to go to hospital for some reason today.
We are hoping to visit with some of the extended family we haven’t seen much of during our few days in the old family seat.  My siblings and I are all third generation born in Duncan so we have lots of relatives scattered around there.  I also want to drive from Cowichan Lake out to Port Renfrew on the logging road that has been paved.  Port Renfrew is at the end of a long, twisty and bumpy road from Victoria and is on the rugged west coast of Vancouver Island.  It is real rain forest country and some of the plants are rather unique.
Posted by John and Aileen on the road at 7:10 PM