GETTING SOME RV WORK DONE IN GRANTS PASS 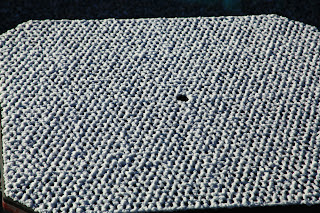 Snow on the grated picnic table in Yucca Valley 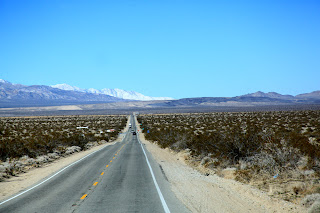 A picture Aileen took after Yucca Valley on 247 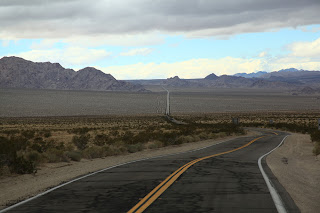 Somewhere in the high desert in California
We made it to the Orange Grove RV Park on Edison Road on Sunday with water and power for $27.  I picked a few oranges and they are very juicy and sweet, unlike the AZ oranges I was buying.  We went to the Outback Steakhouse and had a very good meal.  Aileen was able to order off their gluten free menu.  I spoke to a guy from Salmon Arm in the park here this afternoon.  He and his wife operate the Skimikin Campsite and he works for Baird Brothers in Enderby.  Small world as they say.
The car had a good coating of frost Monday morning, didn’t expect it in Bakersfield.  We went south on Edison Rd then west on Panama which turned into Taft and out to I-5.  That missed all the Bakersfield and highway 99 traffic.  We got gas along Panama at $3.839!  We really travelled today stopping only a few times.  We put on more miles than normal and made it to Orland, CA at exit 619; we’d hit I-5 at exit 239 plus12-15 miles from the RV park.  That is definitely over 390 miles.  We pulled into the Old Orchard Good Sam Park just before 5 pm where we paid $21.60 for water and electric.  It’s fairly close to the freeway but the noise was very muted.  I took Mitzy for a big walk before supper then cleaned the windshield which the bugs really messed up.  Aileen went to bed shortly after supper was over.  She was pretty pooped not having her nap.  She did drive for an hour or more this morning and I managed a couple short micro naps then.  I-5 was its usual rough in spots, especially under the over passes.  Some of the potholes there made you weep thinking of the potential damage to the motor home suspension. 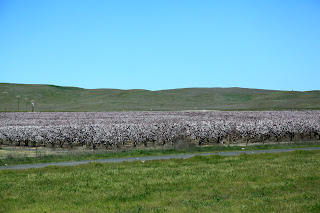 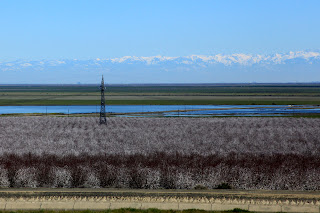 A couple shots of nuts trees in bloom along I-5
The windshield still looked bad in the morning so I dug out my long hose and hit it again.  Still not clean so I used the windshield cleaner at the gas station when I put in some gas and that did a good job.  We had a pretty good drive today except for some serious wind between Weed and Yreka.  The Siskiyou Pass was bare and dry which Aileen found welcome.
We found our way to Henderson’s Line Up in Grants Pass where I wanted them to do their Road Performance Assessment which consists of a road test and visual inspection of the coach with recommendations afterward on how to correct the deficiencies found.  We were able to get the assessment done Tuesday afternoon which was good since the coach was still warm and limbered up which would give results consistent with normal driving. I thought.   We decided when we first bought the motor home that it wasn’t getting traded off but upgraded as required.  I don’t expect we will ever have another motor home, so this is our only chance.  If we can get our steering and handling issues mostly resolved for the amount quoted, it will be worth it.
We have been dry camped in Henderson’s parking lot but are plugged in to 30 amps.   Robert, the owner, mentioned The Vine restaurant when I told him about Aileen needing gluten free.  We went there for supper Tuesday and they have a huge gluten free menu.  Aileen had a hard time deciding but finally went for the gluten free lasagna and enjoyed it.  I had a pretty good hamburger and both pets enjoyed some of the meat later.  Robert paid for our supper Wednesday since I agreed to participate in a video they are preparing to advertise what can be done to Ford motor homes to improve the ride and handling.  Once again supper was excellent.  Since we are staying over here again tonight, it will be back to The Vine again for supper.
We had a neat experience at the restaurant last night. Our waitress June mentioned she was going to BC on Sunday when she heard that’s where we were heading.  When we asked her where, she said “oh you wouldn’t know it as it is really small” but when we pressured her, it was Errington!  It was hilarious when we said well that’s where we are going.  It got more intense when we found her boyfriend lives on Grafton Ave and I told her I had two siblings living on it too and my brother Sam just down the other road as her boyfriend is at the junction of Grafton and Leffler.  So then she told us how they bought veggies from Sam’s roadside stand!  Her boyfriend’s name is Francois and he is an electrician.  I was guessing they met online but it turns out they met at her girl friend's place.  She remembered tonight that she had met Sam.  Once again, small world! 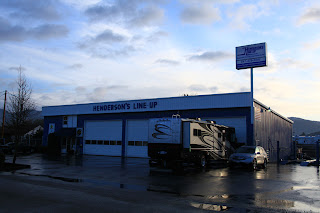 Where we have parked for three nights
We finally got all three employees together to go on the follow up Road Performance Assessment about 3 pm this afternoon.  Robert, the owner along with service writer Gilbert and photographer Brian were the group.  Gilbert drove the first half and Brian was sent underneath to adjust the steering damper several times.  After I took over driving, I had him adjust it a couple more times until it felt right to me.  It certainly seems much improved overall.  I don’t know that we could have left any of the pieces off as they all work to complement each other.  It steers much better and easier, has far less body roll and Aileen says it is quieter and smoother.  When they weighted the motor home, the right rear wheel position was found to be 1050 pounds heavier than the left side.  They added a helper spring plus a half inch shim and it is now level side to side instead of two inches lower on the right. The front was within 1/4 inch side to side after the modifications.  We had heavier torsion bars added front and rear, a rear trac bar which reduces side to side motion of the rear leaf springs and a steering damper installed.  We’ll see how pleased we are once we get back on the road. 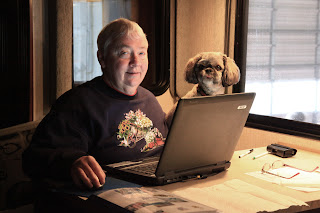 Mitzy has decided to learn how to use the computer
Posted by John and Aileen on the road at 6:40 PM