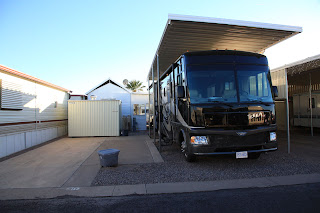 The before picture. Note how close to the posts the motor home is. 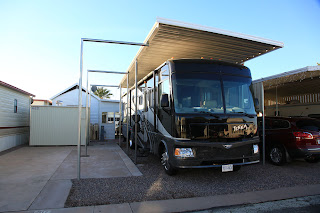 The new posts installed. The old posts will be removed in a few days giving lots of room. This is not the type of construction to use in a snow zone!

Aileen went to the gym before breakfast on Wednesday. She and I did laundry together later. Perhaps I’ll get the correct procedure learned one of these days. I wrote up a questionnaire for those people who have expressed interest in another photo class led by me. I handed them out and from them hope to come up with some sort of consensus on a meeting time. Everyone is so busy with so many things. Aileen is working on newsletter items as they come in.

We went to Coolidge for groceries after lunch. We went via Valley Farms so Aileen could post some things from their underused, no line up post office. Sure enough, the post lady was lounging outside on a bench wondering when the next customer would appear.

It seems Wendy and Randy have already sold their trailer across the street from us. There has been a lot of interest shown in it ever since the sign went up. They are getting excited about their new house in Coolidge and have pretty much completed that deal.

I delivered the two matted and framed prints I contributed to the Canada Supper draw. I thought if I kept them here I’d forget about them or fail to find them at the last minute. My little 9x9 foot office is quite full already with various projects scattered about. We went to the pool later and visited with Ken and Char. They are headed for first thing this morning til early January. The pool was 92F again which is just too warm.

Aileen went to the post office Thursday morning and said the line was really long. She took a cheque into the bank to bolster the account also.

Brian Knapp and crew arrived as scheduled (amazing) and we got the job done installing the three new posts for the RV cover. It went quite well and he will come back next week after the cement has had time to set up and cut off the old posts. Then there will be lots of room to move the motor home over and put out the slides. It will also make it much easier to park the motor home in the future with almost six more feet of width. I cleaned the back cement slab off after a late lunch so everything is back to normal again. I went for a bike ride after for a break. Aileen had a good nap during this time. She made us a nice supper and invited Randy and Wendy so we had a sit down visit. Most of visiting in the park is short chats out on the street or wherever you meet someone. Mostly pretty casual.

I went searching for the coolest pool last night. Our pool, #2, was 94F, pool #3 was 96F while pool #4 was 88F which was just about perfect. The sad part is the people using the warmer pools claim the temperature is perfect. In fact at pool #3 the people were bragging how they keep it covered all day to maintain the high temperature. However, they are just lounging not swimming. There is quite a difference. Enough ranting!

Posted by John and Aileen on the road at 7:50 AM