HALFWAY THROUGH OUR TRIP FOR THIS WINTER 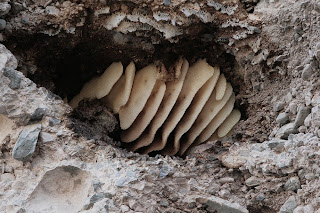 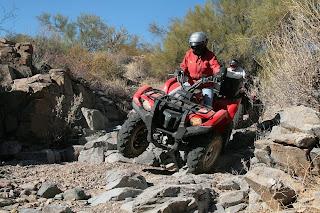 Linda in the rocks 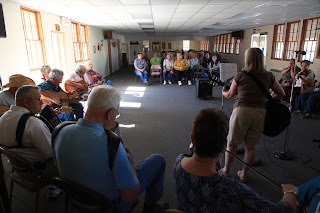 My sister Wendy singing at the Sunday jam session 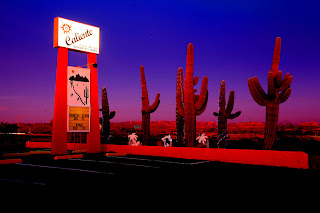 Looking out the front gate of our park 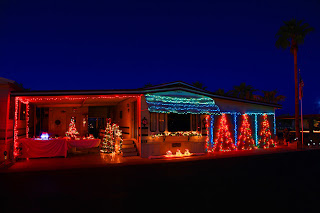 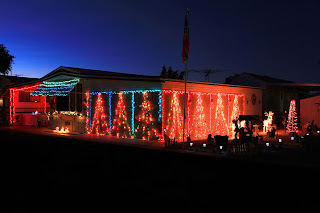 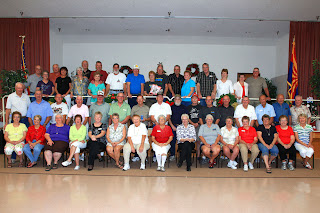 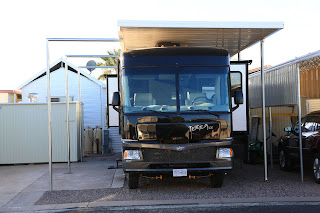 Aileen went off to the gym before breakfast again on Friday while I took Mitzy to the dog park. Aileen took Mitzy for her second walk and took her further around in Caliente. She went for her hair appointment at 11 and now has shorter and less hair. I cut some sheets of mat board down into 16x20 and 20x24 blanks. I cut a few of them into window mats as well. I’m thinking I should frame some prints and see if I can sell some to recoup some of my expenses.

I was to the clubhouse gathering more Chatterbox items and Aileen typed them up and sent them off to the editor. I went for a bike ride in the afternoon then when Aileen asked for more library books, I rode up there too. I actually sat and read for quite awhile as well both outside and in. While I was outside, Gerry from stopped to chat for awhile. He and Yvonne arrived two days ago and Mitzy and I met her and Bailey at the dog park yesterday. We lent Gerry our Canadian Snowbirds in book so he can figure out a few things he was concerned about. We went to pool 4 again as the temperatures were all the same again tonight, too warm. Randy and Wendy went there also. I checked our pool 2 this morning and even with it being uncovered all night it was 92F.

Aileen got up about 6 on Saturday to do her yoga but I lay abed for awhile longer. I finally had to get going to take Mitzy to the dog park. Then it was time to get my breakfast, make my lunch and get ready to go ATVing. 19 of us headed out but four of them deserted us after lunch and went to rougher areas. We went to several areas I hadn’t been to before and probably never will again, unless we miss a few turns again, that is. We got into some fairly rough going in some spots. I also spotted a bee’s nest in a cut bank in one wash. I got a good close up of it.

Aileen went off to Coolidge with the Caliente Clowns for their yearly event with the hundreds of disadvantaged kids who have been removed from their homes. She seemed to have enjoyed her day but was pooped when she got home about 5 pm. I’d been home since shortly after 2. Blue had called while I was at the dog park to say they were having an informal gathering and bonfire at his place starting at 5. We instead went to the Italian restaurant for supper and it was approaching 7 when we got home.

Chas had called Friday night to tell us Dad had quit eating and the doctor thought he was on the way out and the only thing was to keep him comfortable. I called Saturday night and Dad had actually eaten some breakfast in the morning. I understand he wasn’t drinking anything either. One doesn’t last long once they quit drinking; you can go quite awhile without food. I guess at 88 and afflicted with Parkinson’s, a person’s time is limited. It’s still sad though!

The pools were all the same temperature again Saturday night so we were back to pool #4. Randy joined us and Wendy visited from outside the water.

I took Mitzy to the dog park then after breakfast out to the desert. After that Aileen and I went to Coolidge for some groceries, leaving Mitzy home as Sunday was warmer day. We got home at lunch time.

Aileen napped while I went to the Jam Session which was pretty good for the most part. I managed to sneak in the back door and take a few shots from behind Wendy while she was playing. I typed out the clubhouse activities list this afternoon.

I went to Linda and Arnie’s to take pictures of their Christmas lights Sunday evening. I’m finding the Photomatix is too overwhelming for night shots. The colours tend to bleed together too much and become garish. I did a few others along the way as well. I edited a few pictures before and after swimming.

We went to pool 4 again as out pool 2 was close to 93F. It was about 90 in the morning. Wendy and Randy walked in one side of the pool as we went in the other tonight. We couldn’t have timed it tighter.

Aileen went to the gym then the Monday morning announcements at the clubhouse. She helped me get the laundry started on the way then I looked after the rest.

Brian, the contractor dude, came and finished the job by cutting off the old posts and taking them away. Later Aileen and I moved the motor home over a bit and leveled it and put both slides out. I raked some gravel out for the rear wheels to sit in to lower the overall height. The first time I leveled it, the roof was touching the rear air conditioner. It will certainly be easier to park from now on as well with all this room between the posts.

We did a bit more on the Chatterbox news items. We had a parcel from our grand daughter today in the mail. Aileen had a nap in the afternoon while I went for a bike ride around the parks. We went to the ATV club monthly potluck Monday night and there was a good turnout of about 50 people. As usual, it was a large feast with lots of food left over. I took a group shot of most of the attendees after supper. Some of them escaped though. I edited the two pictures when I got home and sent them off to Maureen to send out to everyone.

Our pool #2 was above 94F tonight so back to pool #4 again. Wendy and Randy beat us there. They spent the day in Casa Grande buying stuff for the house. It is just over a week til they move if their trailer sale goes through.

I went off riding with Blue and four others Tuesday morning. We had a pretty good ride putting on about 60 miles. Lunch was at the square cokes.

Aileen took Mitzy for her grooming and she looks much better. It doesn’t take long for her to get looking scruffy. So now the three of us all have recent haircuts. Just two more cuts for Mitzy before we head north. We are right at the half way point for our visit to the .

Once again our pool was 94F so back to the other again tonight. Even it was 90F the night before but it was down to 88F which is pretty good. We’d had temperatures in the high 70sF the past few days but Thursday is forecast to be only 60F with 70% chance of showers. The next few days after are low 70sF. We’ll see.