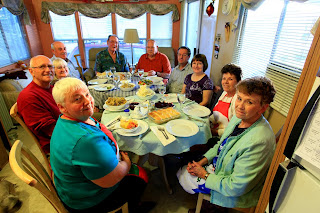 Aileen went to the Gluten Free support group over at last Monday afternoon and found it to be very worthwhile. They meet once a month. I took Mitzy for a walk and also picked up the buddy beer list which I proceeded to type out and email to Phyllis. Speaking of Phyllis, she fell off her bike and got some stitches in her lip and a chipped tooth that morning. I went for a bike ride after Aileen got home.

Wendy and Randy are moved out now. They had supper here then departed for Coolidge. We had the pool to ourselves mostly until a lady from came in. She and Aileen hit it off mostly talking about cats and small dogs.

We were a little late getting going Tuesday morning so Aileen made my sandwich while I took Mitzy to the dog park. From then on I had a leisurely time until it was time to meet Blue. Just Blue, Dave Lamphere and Al from Apache Junction out today and I was elected leader. We went up Highway 79 to the farm road just past Arizona Farms Rd then went through to the 7 mile/9 mile road then wandered up to via some side roads which even Blue hadn’t been on. We went over the hills to the east of Grandma’s Pass and down through . Dave said he was so happy with the speed I kept.

Marie and Glenna were here visiting Aileen when I got home. They had a tour of my 13x19 prints then Aileen gave them a motor home tour. Aileen finally got for her nap at 3:30. I took Mitzy out to the desert for a walk then we got the mail. I picked up another whack of notices to go in the Chatterbox so more typing for Aileen.

Our pool and hot tub were 94 and 104F so back to pool 4 again. Had to listen to a couple yapping about how good warm temps were and when Aileen mentioned exercising the woman said it is too late to worry about exercising. Aileen finally told her to get lost. We visited with Cynthia and Ken from for quite awhile. He was grilling me about ATVing. He hopes to buy here when he retires and have a quad here. He has one at home.

It was mostly cloudy last Wednesday but mild. We had several showers but not much rain. has had 23 inches of rain in six days with major flooding. Even and are having floods. Several house were washed away in mudslides in today, too.

We did the final day of Chatterbox items. Aileen was very frustrated with our block 5 as she has had so many separate submissions and has rewritten the article five times. I told our editor there are too many people thinking they are in control and that there must be one person responsible for gathering the info and submitting it once. She took care of that already. We went to pool 4 again, ours was 92/103F. We didn’t have to uncover it as they threw the old cover away then went to install the new one only to find it too short or something. I had a good visit with Ron who lives at 124 , I think. He’s from .

Boy did it rain and blow in the night! It woke us several times. However the morning dawned bright and sunny. Daryl said .9 of an inch overnight. I decided to pass on ATVing Thursday as I was feeling so poorly with sore muscles and very tired. June Johnson came by with cards this morning and came in to admire my collage.

I spent most of last Thursday vegging and feeling poorly. I did quite a bit of reading and did go check the Chatterbox drop box which fortunately was empty. My picture frames arrived right on schedule but I felt too poorly to do anything with them. Aileen went to Coolidge for a few groceries in the afternoon. In hindsight I should have asked for some medicine.

My cousin Garry called Thursday evening. He’d just heard about Dad’s passing. Aileen and I had both sent messages to them but it seems their son has the use of Barb’s laptop and didn’t see fit to share the news. Their daughter had shown up that morning and went to show Barb something on the computer before her brother was up and found the messages. I imagine things were a little tense around there later.

Aileen went off to Safeway early and got me some medication for what we were thinking was my annual sinus infection. It seemed to really help and I felt better as the day progressed. However, my going out with the carolers seemed to undo all the good so that at bedtime I was a wreck again. I took it pretty easy during the day, did lots of reading. I had a problem first thing with my computer. When I’d finished using it the first time, I closed the lid and the lid and screen separated at the bottom left. There doesn’t seem to be any way to make it fit back together. So then I started researching laptops online to see what was out there at a decent price. I didn’t run across too many with all the features I think I’d like next time.

’s finally made it back Christmas Eve driving their old motor home. Apparently there is still an issue with the Cat engine in the newer motor home and the only guy who can figure out the error code won’t be back until Monday. So, they will have to wait awhile longer to get their Christmas present.

In the afternoon when I turned the computer on the whole screen was high jacked by some virus or Avast or Microsoft or something so that nothing else was visible. I tried running Avast but it didn’t seen to do anything.

It wasn’t a good night. Those non drowsy pills kept me awake a lot. I had a lot of sweats. I started feeling better after taking two pills with breakfast. When I turned the computer on intending to get the name of the screen high jacker, it was gone and Avast was telling me it detected a virus. I ran another full scan and it did isolate a Win 32 virus which I put in the chest like it suggested. Everything seems normal so I’ll keep my fingers crossed.

I cut some mats Christmas morning then matted and framed five large prints. I think they look quite alright. I backed up a few things to the external hard drive then checked out computers at Best Buy. Looks like several contenders in the $800 range.

’s McKinnon’s, Ken and Marie and Howard and Glenna all came for supper. We cooked the turkey on our new portable oven and it worked great. There was far too much food including four pies. Jordan’s and McKinnon’s went home after supper while the rest of us played Mexican Train. We quit halfway through as Howard was too sore from sitting and Aileen wanted to go swimming. Our pool was only 85F this afternoon so she used it.

called from where she and Richard and Robin are staying with Robin’s sister and our daughter Bev called from Salmon Arm.

Sunday night was again mostly sleepless. Aileen told me not to take anymore of the medicine she bought me. I napped a couple times during the day. Looked at the computer for a time but spent most of the time making sure files were saved on the external HD then deleting them. I’d tried to defrag last thing Saturday night but was told I only had 10 % free space on Drive C and needed 15% to do the action. I got it down to over 30%. There is about 25GB of disk space that is used but unaccounted for.

I ate a small breakfast Sunday and hardly any lunch. I have no appetite and the food tastes awful.

’s came over for Mexican Train after supper. Jim won handily followed by Aileen with Jacquie a distant fourth. I went down and helped Aileen uncover the pool at 9pm. The pool was over 88 tonight so we probably won’t cover it.

I slept a little better last night but had a lot of weird dreams. We’re thinking I do have Desert (Valley) Fever for sure with all the rash and angry red pimples popping up all over my torso. I certainly had the joint pain, headache and now the cough. Aileen went to the clubhouse this morning to get Canada Supper tickets for ’s. She went to go to Coolidge this morning and the car wouldn’t start. The battery was dead for some reason. We don’t think anything was on but it hadn’t run since Friday. Either there is a short somewhere or the battery is defective, I’d guess. The car is only 5 1/2 months old. Aileen got me more cough candies which is a good thing maybe as I am developing more of a cough today.

I’m taking it pretty easy mostly reading although I did take the pop cans down to crush this afternoon then went for the mail which turned into a long trip. My vitality seems to have deserted me. It sure is a good thing we brought Aileen’s scooter this year as she is using it constantly. I have been using it myself the past few days. I sent my sister Janet a happy birthday email.

Well we went to emergency before 5 to see the doctor on call as I couldn’t get an appointment for a week otherwise. He said while many of my symptoms could apply to Valley (Desert) Fever, He doesn’t think I have it. He does however think it is a viral infection with a rash and gave some recommendations for caring for it. We went off to Coolidge to Walgreen’s to pick things up. I had a burger at McDonalds. Aileen had snacked earlier so just had a salad. The doctor said whatever I have is just going to have to run its course. Great!! I wanted an instant cure. I’m sure lucky to have such a great wife when I get ill like this!