BACK TO CIVILIZATION AND OUR HOUSE HAS SOLD! 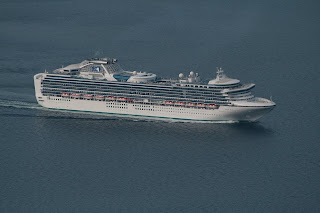 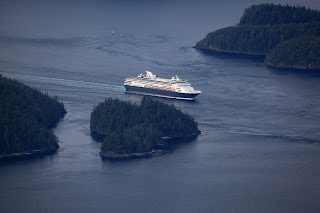 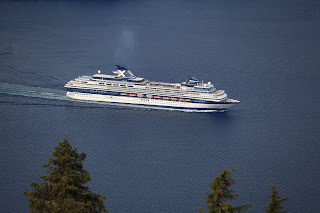 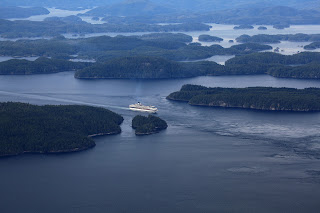 The Mercury in Blackney Passage 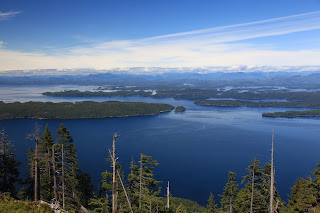 The Broughten Archipelago with Blackney Passage the narrow spot 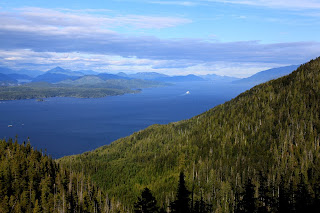 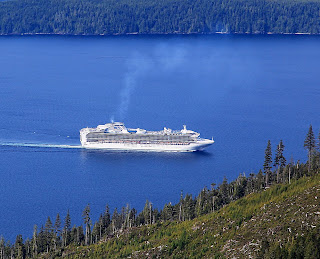 We hit the road to Ida Lake Sunday afternoon (June 27th). It started raining right off so we got good and dirty on the logging road. We had the site to ourselves which was nice. We spent the afternoon fixing Foster’s site up as it was a mess. John and I went to the far end of for a load of gravel which covered up all the old ash people had spread around. John sawed up the old picnic table which was all rotten and falling apart. It was totally unsafe to use and was just in the way. We went and got another table for there and one for our site as well. When I pulled out the awning, just before it was all the way the strap broke. Anne said Dennis had the same problem last year. Anne managed to get a replacement and some spares from a couple days later.

Aileen had baked a couple spuds for supper and made a salad. I barbequed a couple of steaks to go along with them and it was a tasty supper. I took the ATV off and removed the rack so I could lock the generator and stuff up under the tonneau cover. Later, John and I went for a ride up the hill. We saw two bears (actually the same one both ways I think) and three does together further up the hill. The fire warden was making his rounds and stopped by, just as we finished supper. John used to know him so they had a visit.

On the Monday, I washed the trailer then the truck by carrying pails of water from the lake. Later I decided to go up the mountain to check for messages even though it was still damp. Put my rain pants on and vest and jacket and I was cozy. I went 3.2 miles and had a cell signal so got the computer out and fired up. Then, I remembered I hadn’t grabbed the air card – arrrrgghhhh! Oh well, no voice mail so nothing exciting I guess.

Aileen did roasted veggies and I grilled pork steaks so another tasty supper. Aileen had made an iced cake as well. After standing around the fire awhile since it was too wet to ATV, we played just over half a game of Mexican Train.

Tuesday was a quiet day for us. On Wednesday had a quiet start to the day then John arrived mid morning with Dennis’ trailer. He had Nikki with him so the noise level increased for awhile, until they went back to town. I went off up the mountain to check messages and the only one was from Bev telling me I screwed up again and forgot to send the home owner grant application with our property taxes.

John and Anne arrived mid afternoon with the kids. Dennis and April arrived late evening after he returned from his course in . John remembered at the last minute there was a party for his retiring manager so he went roaring out and didn’t return until about 11 PM. I was reading and some time later Aileen got up and asked if I’d stoked the fire. John had been over and thrown a large chunk on.

Thursday dawned rather dreary looking again. We lay abed til nearly 8 then I zipped down and took a few shots across the calm water. I’d been and done it late evening last night too. I made porridge then we visited with John and Anne who had wandered over to the fire Aileen had lit. John and I went to Woss after supper to fax off my application to the city. John got gas, checked his emails (there was one from his son Mike, saying they wouldn’t be up but would go to instead as Shaunee had a fish day on Friday) and he did a couple of work items.

John and I had gone ATving up the mountain to the south in the afternoon. We ended up in fog and heavy rain eventually. We did see a bear with two small cubs and I got a few good shots. On the way down we saw a larger one on the road ahead of us. We were quite wet when we got home. Yuck!!

We did quite a bit of campfire sitting today. Anne made her seafood spaghetti for supper and it was again very tasty. April made cheesecake tarts which were also yummy. I did the supper dishes in stages but there were no plates as we had paper ones.

Well we finally got a fairly decent day on Friday. The big project for the morning was unloading the firewood John and I had cut late last night on our way home. In the late morning, Aileen and Anne came with John and me up the mountain. I called at city hall in Salmon Arm to ensure she received my fax. She said everything was fine. We then went up the Kaikish Main and ended up with a great view of the Broughten Archipelago. After bemoaning the fact I only had my 100-400, we carried on up the road and ended up going though some snow and an even finer view to the west overlooking .

We had a really late lunch when we returned about 2:30. About 4:30, John and I went back up with the other camera and wide lens. We lucked out and had the Diamond Princess (cruise ship) come by below us. We had finished up with it and just started down the road when a Holland America boat came by but we weren’t able to get pictures because we could only get a peeky view. We went way down the old road across the valley then headed home for a late supper of fresh buns and chili, courtesy of Aileen. We went with John and Anne for a short walk down the road before bed. We had seen a deer, grouse and bear this morning and this afternoon, John and I saw 2 deer and at least 2 bears.

Awake before 7 Saturday morning and got up right away since the lake was calm and the sky blue. Of course, by the time I got down to the lakeshore, the wind was picking up and the clouds moving in. I took several shots anyway. We’ve had several loons calling and showing off for us. It was my turn to make breakfast so I cooked ham, bacon, eggs and hash browns. Everybody seemed okay with them.

After breakfast John and Anne took the truck and I took the ATV and met them down at the marble quarry. Anne’s first time there. We went on down to the open pit quarries after. We came back and sat around the fire some more then after lunch, John and I went off on the ATVs up Branch 250 off . We puttered down an overgrown road til we got tired of that then went up Kaikish 42 lower and then upper roads. Saw a bear and cub on the upper. Had a great view of and just as we were leaving I spotted a cruise ship way up past Cluxewe so we waited. Before it got to us, I spotted a second one coming. The first was the Celebrity Mercury and the second was ’s Ryndam. It took over two hours for the two of them to get past us. It was definitely a magic experience and fortunately John was very patient. We were 12.4 miles back to camp. I checked for messages several times but there were none. We had pork tenderloin for supper along with lemon pie with the last of Aileen’s Caliente lemon juice.

We were up about 7 Sunday morning to a dreary dawn. I had heard it raining in the night. We did get a glimpse or two of sun while packing up but that’s all. Dennis made us breakfast sandwiches today. I went up on the roof and poured a couple pails of water down the awning to clean it of needles. We said our farewells and hit the road at 11 AM. Needless to say we were pretty dirty before going far. It took us 25 minutes to the blacktop at Beaver Cove. We had rain off and on til nearly Nimpkish Camp and it was heavy at times which cleaned up the units enough that we didn’t have to find a carwash before parking at Cousin Bill’s.

We stopped just past Woss for lunch then stopped at Big Tree Creek for Aileen to have a two hour nap. It would have been longer except for my waking her. It was 19C so I sat in the sun and read.

When we were setting up at Bill’s I blew the fuse on the electric jack. I’m sure we have a handle for manually doing it but we sure couldn’t find it. We ended up cutting the fuse out and using vice grips to connect the wires as the fuse had broken and we couldn’t get one end out.

When I was checking emails, there was one from our realtor dated July 1 saying he considers the house sold. I would say yay!! but I think we’ll wait until the cheque is in the bank. So there were more papers to print and fax back.

We were up about 7 Monday and after taking Mitzy for a stroll around the block, I joined Aileen and Bill in the house for toast. One or maybe two of the houses in the neighbourhood have sold since we were last there so I guess the market is slow there too. We got on the road shortly after nine. First on the agenda was dumping the tanks at then gas at Merville. I bought toilet chemical (safe for septics) and a hot water tank rod at Arbutus Trailers.

I stopped at the CanAm ATV dealer to inquire about the next service for the quad. Next we stopped at and drained the water heater to check the anodizing rod and it was still pretty good so left it. We drained the fresh tank as well to get rid of the mud in the bottom. It was late enough to have an early lunch which we did. I had also called the realtor to talk about final papers. He had called us earlier while we were driving through Courtenay. I spoke at length with Debbie at LeTourneau’s Notary in Salmon Arm about the procedure we need to follow. I think we have that all straightened out. When we got to Charlie’s, I printed out the paperwork and had Chas witness it then we faxed it off to the realtor. He was getting antsy about it as he had been sitting on the deposits too long already. After that, we completed setting up.

While Aileen had a two hour nap, I went to town and washed the truck and ATV. We heard that one of my aunt’s down in had passed away last week and the service is this coming Saturday.

Today is Aileen’s birthday so we went to the Brew Pub in for lunch. We did various shopping along the way as well. The temperature is way warmer than we’ve been used to. It was 24C at 3 PM and it is forecast to be over 30C by the weekend. Two of my sisters and one of my brothers and their spouses arrived here after supper to wish Aileen happy birthday. She thought that was a nice surprise.

Posted by John and Aileen on the road at 9:26 PM