WE TAKE RICHARD AND GEORGIA TO CLUXEWE 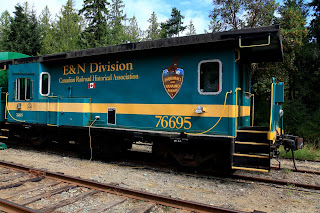 100th anniversary celebration of the train station at Parksville 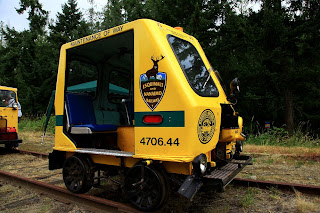 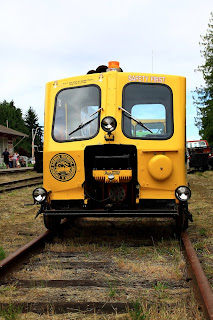 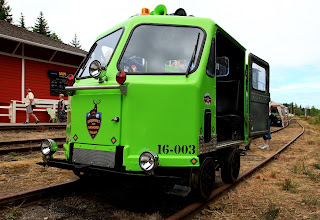 A couple of restored speeders 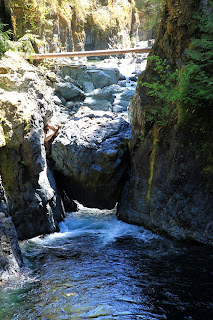 What used to be the Lower Falls on Englishman River. The water always came over the top of the rock and made for a beautiful little falls. I think the rock shifted during very high water last fall allowing the blockage underneath to escape. 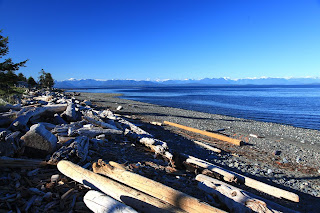 The beach at Willow Point, just south of Campbell River. The snowy mountains in the distance are the Coast Range on the BC mainland.

Aileen and I went to the Parksville train station Sunday morning and met her cousin Bill. We enjoyed the small display brought in for the 100th anniversary of the station. I went picking strawberries with Chas and Sheila near Monday morning. I picked 8 or 9 lbs while they picked over 30. My back was killing me after awhile. Aileen called while we were on the way home to say she was staying at Standford to feed my parents. That was good for an hour and a half she said. She’d gone there for a few minutes after her hair appointment. After lunch, I finished doing the cheque books, which I’d started in the morning. Not bad, I usually try to get that done around the first of the month and it was already the 12th.

In mid afternoon, we took half the strawberries down to for Richard, Beth and Mary and kids. We didn’t connect with them although I did see Mary and Maeve sound asleep in one of the tents. I picked up a few groceries for Sheila and us at QF on the way home. Aileen cooked the halibut and salmon she got as a birthday present from John and Sue for our supper. It was very tasty!

On Tuesday, Aileen was up much earlier than me. I stayed abed til about 7. I took Mitzy for her walk again as Aileen’s left foot is really giving her pain. We went to the ortho place in Wembly Mall where Aileen got some foot pads which seemed to help. In the afternoon, Richard and Georgia with Beth and Mary and their three kids came for a visit. In the evening, Mitzy and I went down to and walked around the campground. It was way less than half full. My theory is that the lack of internet connectivity is a real issue these days.

I received an email Tuesday with all the final paperwork for our house sale so I printed it off Wednesday morning (all 24 pages) and in the afternoon we went to a lawyer in Parksville and had it witnessed. It cost us $50, certainly much cheaper than driving back to Salmon Arm. I faxed all the pertinent pages back to our Notary in Salmon Arm then the next day couriered all of the originals via FedEx. So now we wait for the 28th of July and the final completion. I made three 13x19 prints also which turned out well.

Richard and the whole crew were here for the evening. I cooked the hamburgers, Richard did the onions and mushrooms, I think and Aileen and Sheila the salad and veggie plate. Aileen had made a rhubarb/strawberry crisp for dessert.

On Thursday morning we went to town to stock up on groceries for our weeklong trip back up to the Port MacNeill area. In the afternoon while Aileen napped, Mitzy and I walked the trail around both the upper and lower falls of .

We were awake about 6 or earlier on Friday morning. Aileen got up about then but I tried dozing til nearly 7. We got all packed up, hooked up and used Charlie’s new dump pipe. We managed to make the turn in one go as well so it all worked out. We went to Rathtrevor and parked in the day use to wait for Richard and Georgia to be ready. Aileen tried calling Cousin Richard in but he was out so she left a message. She also contacted her hairdresser and gave her the whale watching info she wanted. We’ve been trying to drop it off for the past couple days but she was never open. Mitzy and I walked along the ocean to R’s campsite and they had just called Aileen to tell her they were ready so Mitzy and I kept right on walking back to the truck. We drove in with the trailer and loaded their stuff up.

It was after 11 when we headed up Island so we stopped for lunch at the rest area. We had a good visit with old friends, Lynda and Perry. Their son Matt and Richard were great friends in elementary school and Richard had enjoyed many fun sleepovers at their house. Lynda had fallen off her kitchen counter where she was installing blinds. Richard finished the job for her.

We moved on up to Bill’s at Willow Point and Aileen had a good nap after we set up. Bill and I installed the fused line for the jack. Bill bought a couple of precooked chickens and Aileen had leftover potato salad, fresh green beans from the store and strawberries and ice cream so it was a tasty supper.

Richard used my computer after supper so I took my camera down to the beach and grabbed a few shots.

On Saturday morning, I took Mitzy for her walk then put the jacks up before going into the house for Aileen’s pancakes. We did the rest of the hook up later. As we were going past I saw a car catch up to us and wondered if it was Aileen’s cousin Tony and Rita. When it passed us, it was Aileen’s nephew Mike and Shaunee and they recognized us too. We stopped for lunch at the wide pullout near Woss and walked down to the river to enjoy the warm sun.

We got parked in our designated lot at Cluxewe then went for a walk out to the point. I checked in and was surprised when the lady was insistent about my paying up front. I said what happens if we leave a couple days early. She said too bad, no refund! I finally got her to agree to my paying at departure. Aileen called Anne when we arrived and they were preparing to come out.

John barbequed the sockeye salmon Mike and Shaunee brought and it was very tasty. Later we had a fire and tried to get warm. There was a nasty wind blowing of the ocean all afternoon. Unfortunately, we are several sites away from John and Anne which made for more effort when sharing food and supplies. It does help to walk off the food though.