WE GO ON VACATION 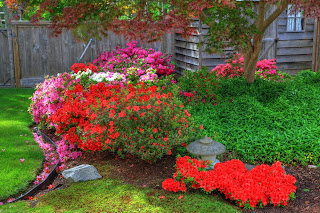 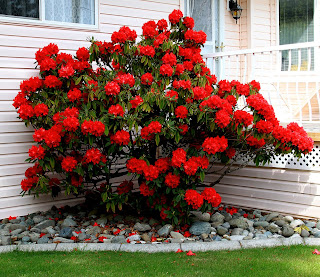 Bill also has some beautiful Rhodos 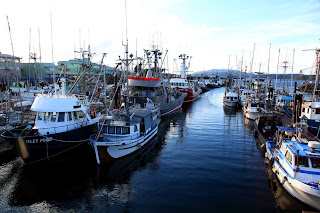 Some of the fishing boats in Campbell River 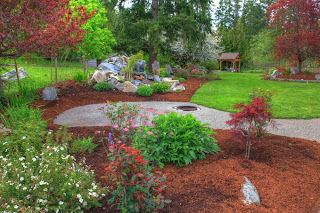 Charlie and Sheila's yard after the mulch was applied

We did some gardening (Aileen) and pruning (me) Monday morning. Chas had 12 yards of bark mulch delivered that afternoon so we worked on that for awhile. We had some thunder and a few light showers later in the afternoon. The mulching continued through Tuesday and a little more on Wednesday.

After lunch Wednesday, I went to town to take Mom to art. It was not a good day. She had thrown a tantrum at lunch apparently as she didn’t like the noodle salad. When she thought nobody was watching, she scooped it all onto Dad’s plate. When I checked on him, he was just finishing his plate. I asked him later how lunch was and he told me it was good but there was so much! I guess he didn’t notice Mom sharing hers. Mom was in foul humour all round. She didn’t want to go to art so I took her for a drive first then we sat on Aileen’s Mom’s memorial bench for awhile overlooking the ocean and watching the eagles soar. We did eventually get to art but left her bag in the truck. She was okay for awhile then disappeared out in the back yard where she was discovered later wandering in the rain. She did have some tea but turned down strawberries and ice cream rather rudely. This from a person who loved ice cream! I took her home early as she was so unhappy. I heard several times how she hated care home. She was quite confused for much of the time also. It’s so sad, because she was such a vibrant personality who always went out of her way to help others.

We’ve been working fairly hard for the past few weeks so have decided it was time for a vacation. We stopped at the Buckley Bay rest stop for lunch and after a few minutes, in drove my nephew Keith and Heather along with little Oliver so we had a short visit. Keith was on his way to a job interview at a law firm in and he was to be called to the bar this afternoon too, I think. After Aileen’s two hour nap, we pulled out three hours after arriving. We drove through several showers along the way but were lucky to have decent weather for parking and setup at cousin in law Bill’s at Willow Point south of . We are parked in Bill’s driveway with power and water hooked up; pretty nice, and we’re only a couple blocks from the ocean.

I took Mitzy for a walk while Aileen started preparing supper but I was back in time to do the barbeque. After supper, we went to the pier in but found no dogs were allowed so we wandered the wharves instead.

Bill had invited us for the weekend as he is having a barbeque for some family and friends on Sunday. We plan to go back to Errington on Tuesday to help Charlie and Sheila prepare for their big garden party on May 30th. We are driving to on the 28th to pick up our son and grand daughter for that weekend. They will take the train home on Sunday evening. Our loose plans currently are for us to spend the month of June on northern and perhaps again in mid July for a week or so.