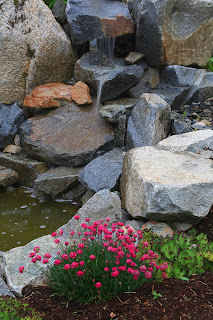 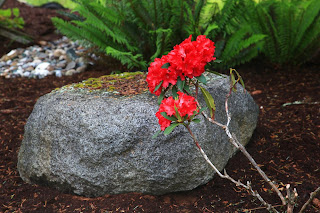 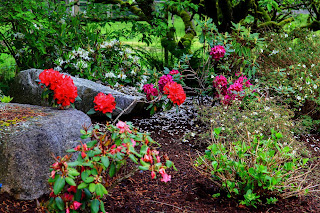 Some garden views at Charlie and Sheila's

We had a great visit with our friends in . We did a shared lunch raiding both their fridge and ours. I’d popped over to the bakery for a little chocolate covered sweet for the other three; I don’t eat chocolate anymore since I discovered it is a trigger for migraines.

By the time we dumped the trailer tanks, it was nearly supper time so we quickly got set up at brother Charlie’s. I had intended using the weed eater to cut the grass in our spot but it was too late and still wet.

Wednesday was a rainy day so I spent much of the morning reworking my house plans. I have been doodling quite a bit coming up with a whole series of house plans for our next nest if our house sells. I did do a little cleaning along the big house under cover and watched Chas and the boys working. After lunch, being art day, I went to . Dad was finishing up his lunch and seemed fine. One of the guys told me Mom wasn’t having a good day. They had given her something to help in the bathroom and it took a lot out of her so they’d put her to bed about ½ hour earlier. She hadn’t had lunch but did have a late breakfast. They would save her some lunch. I peeked in on her and she was sound asleep and very pale. Instead, I went and visited my sister Wendy and Randy. They had just gotten the motor home set up as they’d been to for five days.

We had a busy Thursday. I spent most of my day on the pressure washer doing patios and walkways while Aileen worked on many different things. She took Mitzy for her 8:30 groom then picked her up at noon. Supper was a joint effort Aileen said, raiding both fridges which are getting low on food.

We hit the road about 9:30 Friday morning with Aileen driving. We stopped at Super Store in for gas. I had just finished pumping gas when RBC security called to say they suspected my credit card had been compromised recently and they were canceling my card immediately and would issue me a new number. Great, we’re heading for Port McNeill, with no RBC branches there so we had it mailed to Aileen’s sister Anne. Looks like Aileen gets to pay for everything now.

We got to our son Richard’s at exactly 2:30 (which was the time assigned) and gathered his luggage then drove to ’s school to pick her up. We bought veggies at the Old Farm Market at then stopped in Ladysmith for Chinese buffet. We stopped again at Super Store for gas then Richard and I went in for groceries.

I spent much of Saturday morning on the weed whacker then the pressure washer again. All the cement looks great now that it is clean. Charlie and Sheila took us all to Roong’s Westhill Restaurant for a great supper that evening. roared around all morning playing with Belle the golden lab and Dexter the cat. She was pretty tired this evening. She sure beamed when the waitress brought her some ice cream, though. She had eaten a pretty large supper even trying some new things. Aileen was surprised at one point when she had just put something onto her own plate and a little hand snaked out and grabbed one of the pieces.

Food preparation occupied much of Sunday morning for Aileen and Richard alternating with reading to . Chas and I did outside stuff setting up tables, tents and chairs, some of which we went to the rodeo grounds for. Interestingly, the big tent with 20 chairs was not used at all. We never had that many people at once. While there was a pretty good turnout, about 70 people, they tended to come for awhile then depart.

I manned the BBQ all day but there were long spells where I turned it off. The cylinder ran out of propane just after the first batch. I took one of our bigger bottles off the trailer to use the rest of the day. My brother Tom was the only sibling who didn’t make an appearance. The other seven of us did. Surprisingly, Richard was the only one of my parent’s grandchildren, as was Georgia the only great grandchild who did show up. We had expected several of them. The garden party was a definite success and lots of good visiting happened. Charlie and Sheila led many tours of the old cow barn they have converted into a nice cozy little house. They are considering moving into it themselves and converting their 4200 square foot house into Grafton House, as a vacation rental. Their youngest son and his partner had just finished the floors and counter tops with their product called Granicrete. The counters look like high end granite and the floors look like nice tile. Most of the lumber and beams were cut on the property so the little house has some uniqueness. Charlie has made most of the doors and cupboard doors out of rough cut Cedar.

I took the truck in for a service this morning before we head off to the top end of the . Aileen has done laundry several times this week in addition to preparing many meals. Perhaps we need another vacation.

Posted by John and Aileen on the road at 2:48 PM