LIFE IN THE SHUSWAP 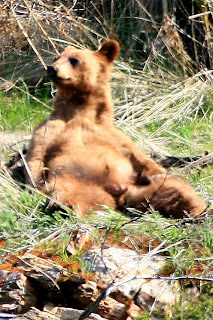 Highly magnified of the lounger.........................MORE PICTURES TO COME ............................................................................................................
We’re still doing much the same as the past couple weeks. I’ve continued with the massage therapist and had one visit with a chiropractor. My back is definitely improving. Aileen has been able to visit some of her friends and has been gardening at daughter Bev’s. Aileen saw a bear just down the road yesterday morning, when walking Mitzy. We had to give up on the solar panels again as the rainy weather really prevented much charging. I have come to the conclusion that we are under paneled for what we need regardless of what the installer says. The next step will be to install our third panel and a larger regulator. If that is still not enough, then a 1000 watt Honda generator will likely join the team. Trying to be green and self sufficient for power consumption has been quite a struggle for us.
Aileen met her friend Edna for lunch yesterday and I was invited on a photo shoot by Doug and Jim. We went to the Niskonlith hills west of Chase and the balsam root was magnificent. There was a great variety of flowers blooming so lots to admire. When the weather wasn’t conducive to scenic shots, I switched to macro and got some caterpillars. One of the highlights of the day was watching a cinnamon coloured black bear. He was nervous to start but after I wandered back and forth without going closer, he settled down and sat up then lay back in utter relaxation. My shots are not terribly close as I didn’t want to bother him any further. He stayed put so Jim and Doug could also have a look. The weather was very quick changing all day and somewhat of a challenge but made for some nice shots.
We went to town early this morning to go to Aunt Eleanor and Ron’s yard sale. We went to several others in their strata but only bought a sleeping Mexican and a donkey from Eleanor’s, for our park model in AZ. Aileen bought some irises at a church plant sale which she then planted at Bev’s while I went downtown for several things.
Back home, I sat in the sun then walked Mitzy while Aileen had a nap. It was really warm for a while but the wind remains cool when it blows. Tonight we’re joining my aunts Jacquie and Eleanor and spouses for supper downtown.
We were saddened to hear of my cousin Dale’s wife Evelyn passing away from an aneurism the other day. We had a good visit with them both just a few weeks ago and no hint of anything amiss. You just never know, it seems.

Posted by John and Aileen on the road at 4:18 PM