WAITING FOR SPRING IN THE SHUSWAP 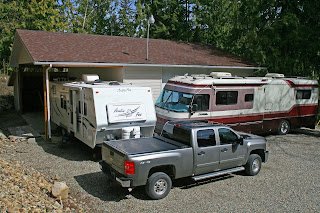 Parked in Jordan's yard at Tappen, BC (near Salmon Arm)---------------------------------------------------------------------------------------------------------------------------------------------------------------
Last Sunday, we were invited for supper at Jordan’s along with their friends, Clarence and Grace. We had a great visit and Mexican Train later. Jim was amazed to end up the winner! For a change, I was middle of the pack instead of last.
On Monday, my back started acting up and has been dominating our week ever since. I’ve had two massage therapy appointments and used Bev and Kev’s hot tub every day as well. The heat really helps but the effect doesn’t last too long after I get out. I’m applying heat and cold during the day also as well as some exercises. It’s not a lot of fun! Also on Monday, we went for supper at Haviland’s, friends two doors down in the strata, to celebrate Dell’s 76th birthday. Their daughter Jan and two grandkids plus a friend were also there. We had a nice supper courtesy of the Thai restaurant and birthday cake Jan had made.
Aileen has picked out new glasses for when she has her appointment next week.
We took Bev for lunch on Thursday, her day off, to celebrate her birthday which was Wednesday. We had a very tasty meal at the Thai restaurant.
On Friday, Aileen and I went to Vernon looking for several things. Didn’t find most of them either! We were going to visit our friend Natalie but she was pooped from doctor visits, her nephew was coming from Kamloops shortly and it was already time we were heading home. We will call her next time we get to Vernon. Aileen has been doing all the driving this week so I get to sightsee.
We tried to last as long as possible with the solar power but gave up and plugged in after 5 or 6 days. We are supposed to take it in again next week for him to check more ideas. I still think we just don’t have enough panels although the installer disagrees. The picture this time shows us parked partway in Jim’s RV garage. We left the front out so the solar panels were fully exposed to the sun but we out of the way as much as possible. Of course, that means their motorhome has to sit outside. Isn’t that generous on their part?
It got up to 18C yesterday but cooled off quickly in the evening. It has stayed very cool all week with temperatures hardly ever getting above 10C (50F). The fields are greening up rapidly and if it does get warm the grass will really sprout. Staying cold this late could mean high temperatures may come on rapidly and we’ll not be acclimatized. I really miss being able to sit out in the sun. The sun is shining weakly this morning but the wind is nasty. Oh well, off to the hot tub after lunch.