I RUN WITH THE WILD BUNCH 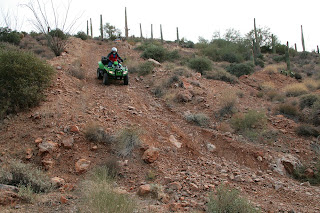 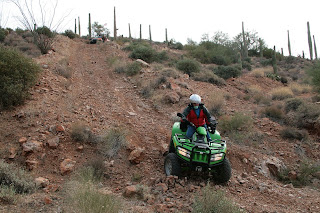 It's good that the hill wasn't any longer 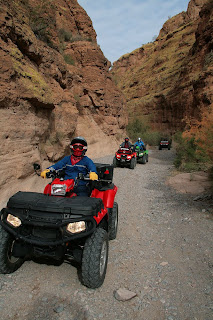 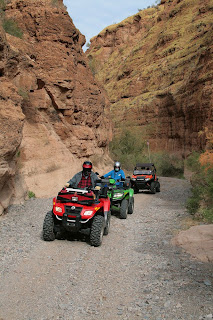 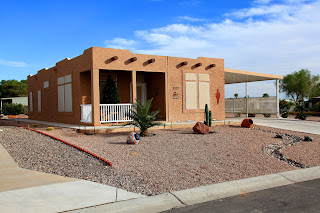 When I was returning from taking Mitzy to the dog park on Wednesday, I noticed a guy parked by the clubhouse selling name signs. He was part of our twice monthly Country Store. I liked the quality so talked to Aileen about it when she came home from exercising and went up and ordered one. Since I was the first of the day, our sign was ready in one hour. I didn’t put a home town on it since we have no idea yet where our next place will be so just put BC.

We went to Coolidge for a few groceries and a couple other things. Home in time for lunch. I had another super good BLT, I don’t think they sell them that good in cafes. Aileen did some canvassing re: luminaries then napped awhile. There was a lot of shooting next door that day which kept Mitzy shaking the whole time. I went for a longer bike ride through the four parks so my knees and butt were complaining that night.

It was partly cloudy but didn’t look too threatening so I went ATVing Thursday. It took quite awhile for someone to step forward as leader. was the one and he took us to 9 mile gate then east and up a wash past the new corral. Well, after a little one of the older guys decided it was too fast and rough so he stopped effectively stopping the rest of us. We finally carried on a little further and came on some rougher going. I grabbed my camera planning to take shots of the guys coming through but most of them turned around and left (deserted?). Since I had walked through it, I didn’t think there was much difficulty involved so decided I was going to ride it. This left me with the “wild bunch” or at least two of the three we call that. I definitely had a more challenging ride but I don’t think it was too dangerous. I did go up steeper hills and some deeper washouts but at no point felt my machine make any tippy moves. Actually I was quite impressed with how it handled. Will I join them on a regular basis? No.

We ran into a bit of rain at lunch time just north of Grandma’s Pass. We decided to head home from there and hardly had another drop. It was enough to lay the dust close in to the hills but the closer to home the worse the dust became. An hour after getting home and it started to rain in earnest. By 3:30 the water was running down the street. I checked our pool at 3 pm and it was still at 94F. The hot tub for some reason was 86F! That meant we had to trudge over to pool 4 again. It surprisingly was 90F even though it wasn’t covered. Didn’t cover pool 2 again since it was so warm.

I went shooting lights again after swimming trying for some reflections in the puddles. Arnie and Linda didn’t have theirs on and just as I went to shoot Bill and Freda’s, it went off, probably with a timer. I put the last little string of lights in the motor home and they look pretty good.

Wendy and Randy brought their Wizard game over after supper. Aileen was the huge winner at 420 or more points and I was second. It was quite an improvement for Aileen as she only had 10 points last game. I did get 100 points in the last hand by taking the 8 tricks I bid.

We got the sad call Friday morning from Chas that Dad passed away at 6:15 AM. Sue was with Dad and it was good that she was able to be with him til the end. I didn’t eat breakfast for quite awhile after that then we went to Ken and Marie’s with the community ladder and I fixed the wire mesh at the peak of their roof to prevent the pigeons from accessing the space. Marie made us chicken soup for lunch so we visited awhile. Jerry and Donna, ATV friends, stopped by Ken’s when they saw me there. Jerry said we had ¼ inch of rain according to his guage.

Later, Aileen did laundry while I went to Walmart and Fry’s. I bought a CD player for the park model as it is too hard to remember turning off the old one that runs only on battery power. It’s costing too much for 6 D cells each time we forget. I was later home than expected but I just felt like poking around instead of rushing.

I took Mitzy to the dog park about 8:20 Sunday which is later than normal. We had stayed a little late in bed and Mitzy was very reluctant to eat anything. I took her for a short walk in the desert after breakfast. Joni brought over a bereavement card and a hug this morning and chatted awhile. Wendy and Randy came by then for a few minutes also.

We went to the dollar store for some more cards and a couple other things then to Coolidge where I wandered around the flea market for a bit. Didn’t buy anything but then, I wasn’t planning on doing that. From there we went to Chili’s in Casa Grande which was advertised as having a great gluten free menu. Turned out it wasn’t quite that good but Aileen made up a lunch by combining sides. I had a terrific burger. The only downside was the cook put the stick though it at an angle and I stabbed my chin first bite. Aileen told me I had catsup running down my chin and I had to allow I hadn’t had any but I did remember getting stuck with the point. I bled well. We took the long way home crossing over I-10 north of Casa Grande.

We stopped at Coolidge Safeway for water and a few groceries then it was home and nap time for Aileen. I went for a bike ride around the parks. I visited with two of the couples down at the end of our street for awhile including having a beer. By then it was time to take Mitzy to the dog park.

Sue emailed suggesting April 9 or 16 as possible dates for Dad’s service. I’m sure glad they decided to have it later as I wasn’t looking forward to having to make the trek up there in the winter. I told her to go with either one as it was impossible to decide which would be better for us as we can’t predict the weather so don’t know if we’ll be in Salmon Arm or on the Island first.

Thank you to those who sent messages of condolence regarding Dad. I’m so thankful to have siblings who will look after all the details for Dad’s affairs and service allowing us to remain in until our planned departure the end of February.
Yesterday was nice and warm again but more showers are forecast for tomorrow through Thursday. Friday and Saturday are expected to be sunny and 70F. So far it has been a much nicer winter than last year which was so cold and wet.
Posted by John and Aileen on the road at 12:28 PM