THE BIGHORN SHEEP ARE BACK 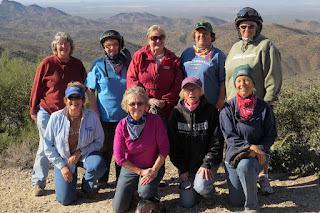 On our Thursday ride this week, 21 machines went over the mountain to Superior for lunch.  These are the ladies who accompanied us.   It was about 35 rough miles getting to Superior so we came home an alternate route that while longer at around 45 miles, was actually faster. 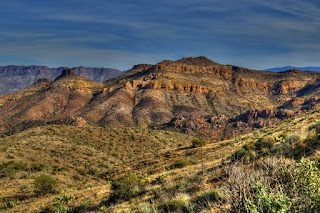 As it was a long ride there wasn't any real opportunity for photo stops but I did make this one.  Short as my stop was, I didn't catch up to the others until the next rest stop far down the trail.  At least there wasn't any dust in my face. 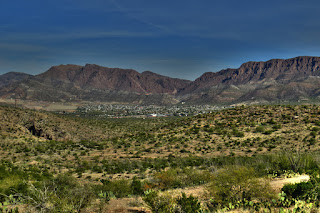 That is the little town of Superior, AZ way down there 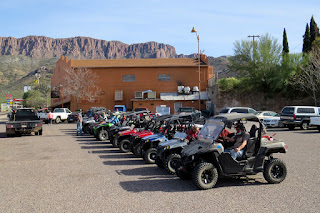 All but four or five were side by sides on this trip.  Ours is third one in from this end. 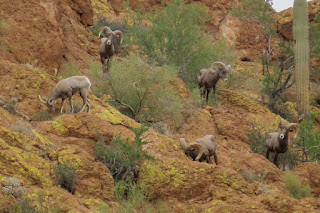 On our Friday couples ride yesterday, we managed to spot some sheep.  This is the first time this season I have seen them.  They seemed to be mostly rams.  These were barely visible to the naked eye and were difficult to shoot as the light was low and it was hard to hold the camera steady enough. 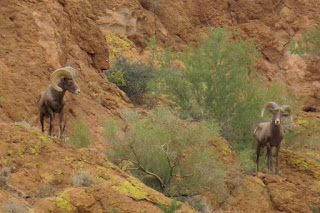 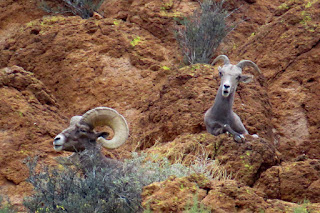 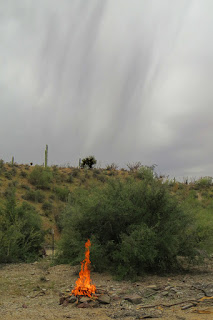 There was a 10% chance of showers on Friday and here it comes.  We actually got a few spits before lunch was over but none while we were riding. 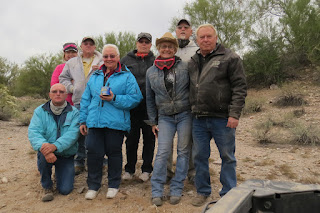 In addition to our regulars, Norm and Cheri and Bud and Jackie, we had a brand new couple out on their first ride through Box Canyon.  Steve and Linda are from Prince Albert, Saskatchewan.  I went with them a couple weeks ago and helped them purchase a used side by side.  They had done some practice riding out behind the park but got to do some more serious riding with us.  They were a little nervous going up the big hills and getting some elevation, being flat land people but by the end of the day everything was cool. 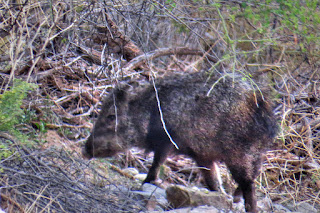 Not only did Steve and Linda see sheep on their very first ride, they got to see a Javelina as well.  This was taken as it was moving off the trail away from us.  Again in low light conditions so way too slow a shutter speed. 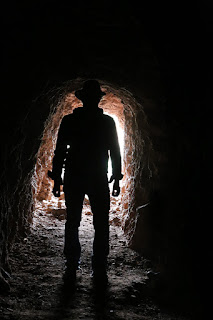 Some of us went into the mine shaft above where we had lunch.  That's Linda in the gunfighter pose.