FOUND PICTURES, COLORADO WILD HORSES AND ON TO AZ

I had forgotten these photos in the difficulty I had with my computer and its subsequent one month vacation from me.  Aileen has been struggling with her old computer and we were going to get her another basic laptop as she doesn't need a high powered machine.  However, after being without the ability to edit my photos for a month, we decided to replace her computer with a much more capable laptop.  She now has a Toshiba with an i7 processor and 12 GBs of ram.  I will load all my photography programs on it so it will be ready to use should the need arise.
We had another card game with friends last Saturday and were able to sit out in their carport to play.  I continue to ride two or three days of the week and Aileen comes out one of the days.  We've been having frosty mornings so it is a little cool to start.  Aileen walks every morning and as the weather cools, she sees less people. 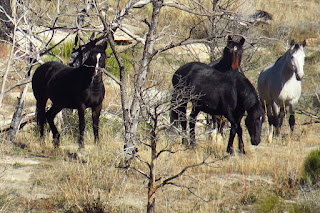 Four couples of us in two cars with Ken as our guide, ventured up to the Little Bookcliffs area northeast of Grand Junction, CO.  After several hours of scenic touring, we found some of the wild horses that inhabit the area. 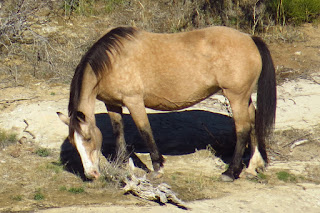 This one appeared to be the chief 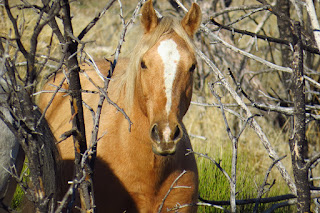 I had gone down from the road to get some closer shots of the herd across the draw when I was surprised to meet three horses up close. 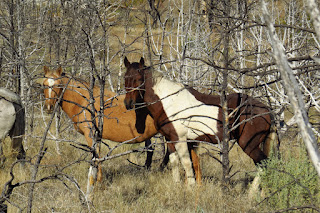 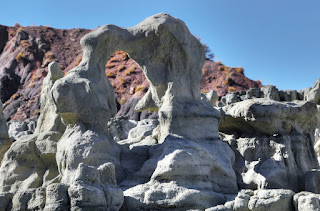 We went past an area of neat clay type geology 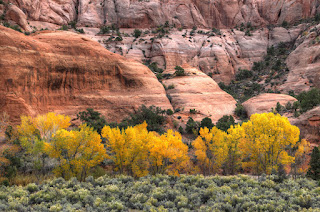 After leaving Grand Junction, we drove through Moab.  This is a few miles south of Moab and I was excited to see the fall colour in the red rocks. 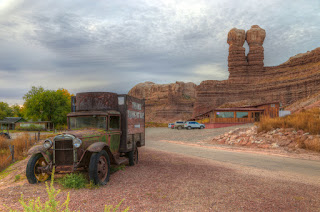 We spent our first night in Bluff and after supper, I took my cameras for a bike ride.  This old truck advertising the Twin Rocks Cafe and Trading Post made for a good subject. 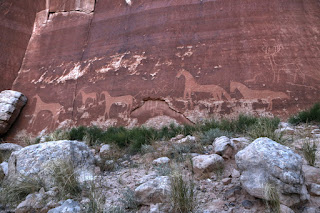 I was following an old obscure trail when I met a couple of photographers from California.  The lady showed me some photos she had taken of some petroglyphs.  They gave me sketchy directions and told me it would be too dark for good shooting and that the access was very steep and tricky.  Fortunately I had my Canon 6D that will autofocus in very low light and I was able to handhold steady enough to get a few images.  Of course, there is evidence of more modern artists although their quality is severely lacking. 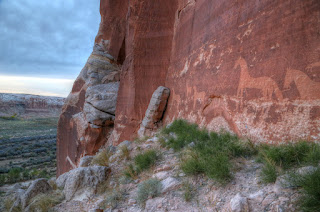 The petroglyphs were at the base of a cliff accessed after a rough scramble through boulders on a steep slope. 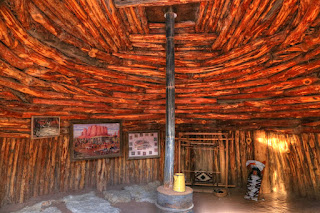 Historic Bluff Fort had some really good displays.  This hogan looked so nice inside compared to the drab exterior pictured below. 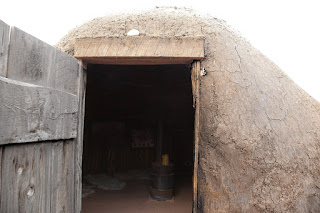 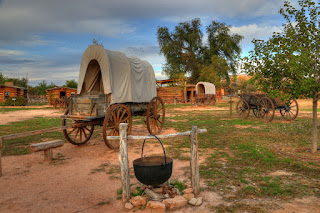 I thought this display was well done! 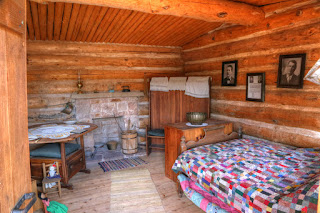 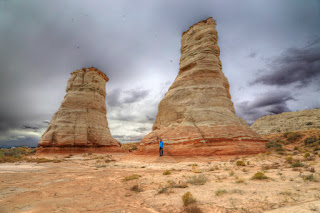 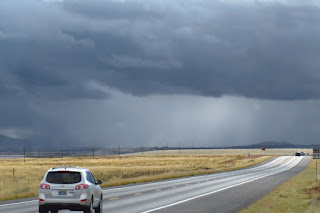 As we got nearer to Flagstaff, this was what we ran into.  Going over the final high  spot before Flag, the snow was about 500 feet above us and the temperature was only 4C (less than 40F) mid afternoon which is why we decided against staying there and carried on to Verde Valley and a few thousand feet less elevation.

Posted by John and Aileen on the road at 9:41 AM