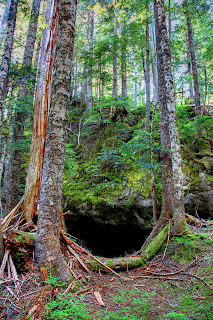 Brother in law John and I were out on the ATVs again yesterday and found Dreamtime Cave which we had searched for several days ago without success.  One of John's coworkers discovered Dreamtime in 1995 while laying out a logging road and he shared the location 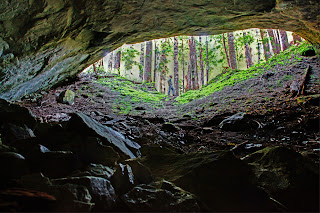 A scene from the back of the cave captured by two exposures and blended in HDR. The cave has this huge opening then just behind where I'm crouched, using a log as a camera rest, you would have to get down on your belly to crawl into the cave proper.  Dreamtime is listed as 1040 meters long and 58 meters deep on a Canadian Cavers website 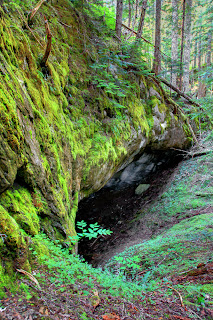 A side view of the entrance to Dreamtime 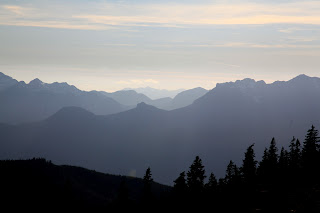 Looking westward in late evening up in the mountains 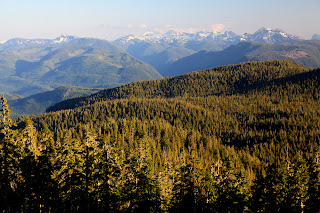 Looking across to the Rugged Range near Woss Lake
When John and I got home last night, Charlie and Sheila had their tent set up next to John and Anne's trailer again.  They had spent one night at Ida Lake after our ATV trip up the Kaikash.  Yesterday they canoed up Ida Lake and then the Kokish River beyond for some distance.  They visited cousin Chris and Gord the other day and were here the night cousin Steve joined us for supper.  This morning they were visiting cousin Donna at her work then going to see our aunt Nancy and Mac before heading off to San Josef Bay. They hope to meet up with their son Wayne and Sandy at San Josef Bay either tomorrow or Saturday.
Posted by John and Aileen on the road at 2:20 PM