MESSAGE FROM THE MOUNTAIN 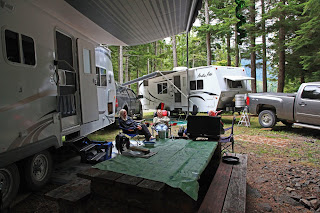 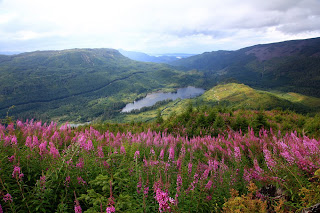 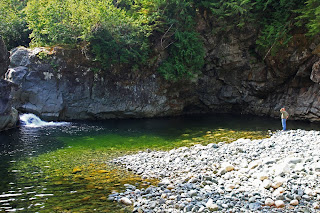 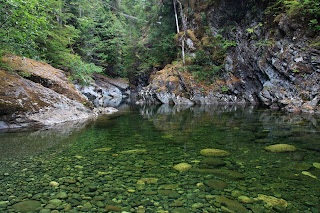 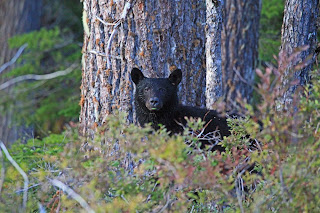 Little black bear (he was right here as I was uploading this post- got a pic about 100 feet away!) 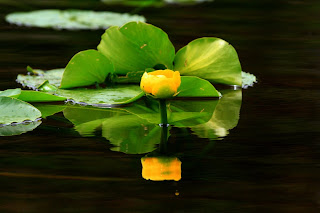 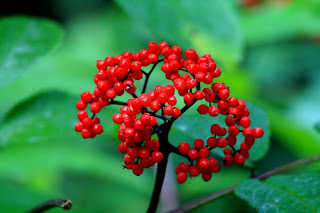 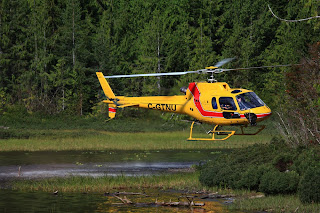 This helicopter had a lady pilot 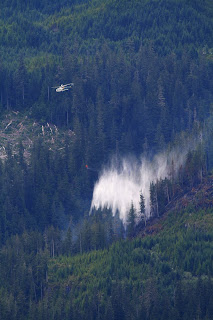 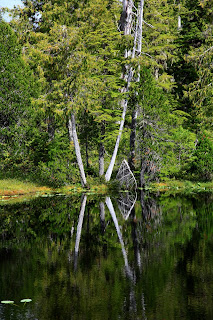 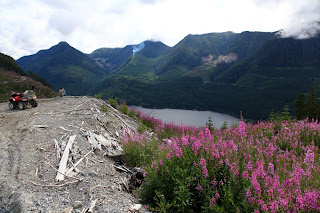 Watching a fire across Bonanza Lake 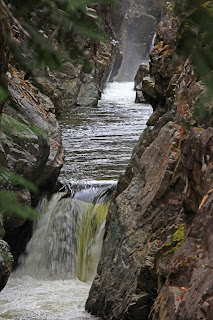 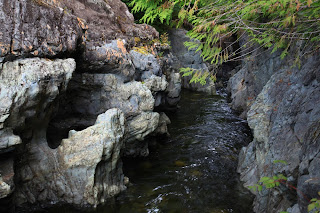 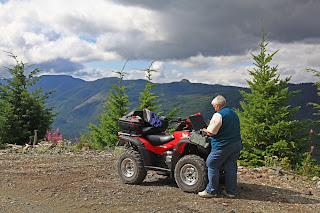 Your thoroughly modern woman on the internet way up the mountain 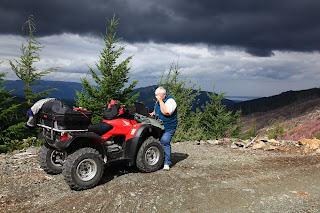 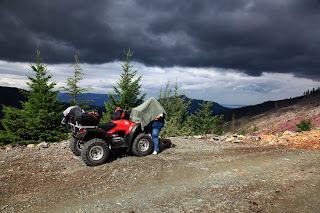 It’s been a week since my last post. We moved up Island to Port McNeill last Friday and after visiting Aileen’s sister for a couple hours, we all moved our trailers down to recreation area which is 12 kms up a gravel logging road inland from Beaver Cove. We are still here. We will probably move tomorrow as we are running low on groceries. John and Anne have been commuting to work from here using his work truck. Both our trucks are still connected to our trailers and ours is trapped as it is nosed into the trees with the trailer behind so we’re unable to just drive for groceries or visit other family.

There has been a campfire ban because of the earlier dry conditions and there are several small forest fires burning in this area. Right across from us is a staging area for firefighters so we have had a ringside seat watching the helicopters moving the men up to the mountain and back. We’ve also seen the choppers dropping water on the fires. We’ve had quite a bit of rain the past couple days and today the logging trucks are running again.

John kindly left us his Honda four wheeler so Aileen and I have done some exploring of logging roads. Yesterday, we went up above here and took our phone and laptop. We were able to check for messages and emails. The sad thing was learning of our friend Natalie’s passing near the end of July. That came in a note from our friends in , Bill and Joyce. Aileen and I had visited Natalie at the end of May and had a good visit and we wondered then if she’d be there for us to visit in September. She had been an avid reader of this blog and emailed me comments periodically. We saw two deer and a bear. The night before, John and I had gone up with his work truck and seen a bear and a marten. Last night John and I went looking for, and found, an abandoned marble quarry. John had his 10 foot Zodiak boat here the first few days and Aileen and I rowed out one day for some water lily pictures. Another time she and Anne (and the dogs) rowed out to a little island. They ended up being there longer than planned as the wind picked up in the wrong direction.

John and I have done a fair bit of exploring along the which is only a few minutes walk from here. It has some beautiful little canyons and much of them are inaccessible. Being rain forest, walking along the bank is not too easy in most places. Fortunately, there are some old trails in spots and for one section there is some new activity which John thinks had to do with a proposal to use some of the water for hydro generation downstream. There is salal way higher than your head and along with other plants and vines and windfall trees, walking becomes a challenge. We have found some nice waterfalls and huge deep pools to make the effort worthwhile.

Suppers have been a group affair and a couple of nights, J&A’s son Dennis, April and their two kids have joined us. We have been doing pretty well with our solar panels even though there hasn’t been lots of sun. We used John’s generator a couple times to charge the laptops and run the vacuum and microwave and give the batteries a boost.

Posted by John and Aileen on the road at 4:11 PM