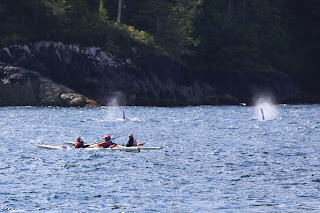 These kayakers have a good view 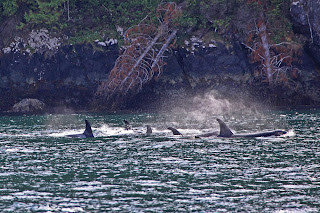 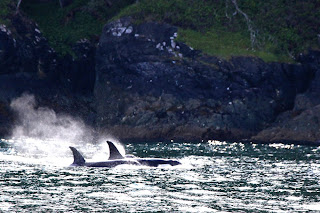 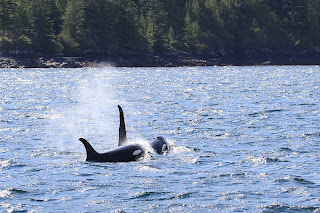 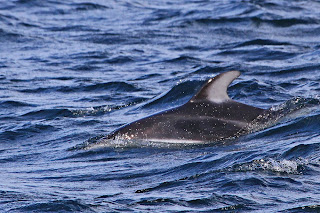 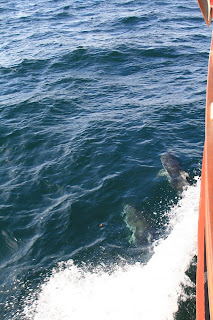 Dolphins at the bow at full speed 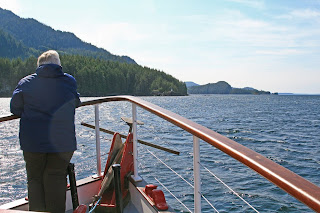 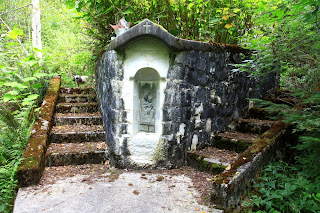 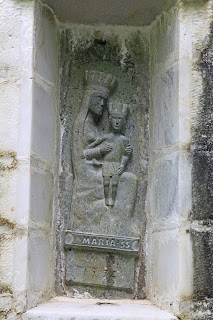 We left Ida Lake last Friday and moved to camp a little past Port McNeill, which is owned by the local Indian band. John and Anne’s family have a couple of sites on a monthly basis so we were able to get into one of those. We’re close to the beach and cruise ships go by every evening about 5:00. Some of them are quite close when passing. We have gone for walks through the campsite each night and some along the beach. The ladies watched a pink salmon get caught from shore one night.

Yesterday, John took us a few miles up the coast to an old settlement called Suquash which was a coal mine for the old steamships that plied the coast in the 1800’s and early 1900’s. Huge trees have reclaimed most of the area but there are still bits and pieces to be seen such as chimney’s, posts, walls and old steam derelicts. Some of the old cement is still good but most is very crumbly. Apparently the underground shaft ran out under the sea bed and the miners were able to identify individual ships by the sound their propellers made.

Saturday was Orca Fest in Port McNeill and the weather was beautiful for it. We watched the parade from just down the street from John and Anne’s and later walked around the displays in town. Earlier, I had taken a reunion picture to my cousin Donna who lives close to J & A. I have three cousins and their mother (who is one of my Dad’s younger sisters) in this area. We saw them all this trip. Later, we sat in J & A’s backyard as the grandkids were being cared for. I got sunburned on my tan, I guess because of the higher humidity than my tan was done at.

Yesterday morning I visited my cousin Steve; his mother was my Dad’s oldest sister. He has a nice place which is a mix of residential and commercial and he has lots of projects on the go to keep busy. We had a great visit then he met the four of us for lunch in town to continue the visit for awhile longer.

On Monday we finally made it out on a whale watching boat from Telegraph Cove. I’ve been thinking of it for several years and just kept putting it off. We left Mitzy in the trailer and Anne let her out when she got back to the trailer in the afternoon. We thought the trip was going to be a flop for the longest time then all of a sudden the Orcas (Killer Whales) started to show up and show off. There were also lots of Dolphins who spent lots of their time harassing the Orcas. In the evening we had one last supper and evening walk with J&A. It’s been a good visit! Thanks, guys.

Yesterday was moving day again. We packed up and went into Port McNeill to use the dump station then said our farewells to Anne. We met John down the road at the old Nimpkish logging camp and he took us for a short walk to check out a shrine in the forest. Apparently it was built by a logger (perhaps Greek) who lived in the camp in the early 70s. I’m guessing the marble came from the quarries we explored the other day. John visited while we had lunch in the trailer then we headed south again. We stopped at rest area for Aileen to have an hour plus nap. The temperature was in the mid to high 20s in , quite a change from the mid to high teens the past two weeks up .

This afternoon we plan to visit my aunt Isobel and a new to us relative from the reunion, . Tonight we are joining Aileen’s sister Pat and Jim for supper at a local restaurant. We only get to see some of the relatives each trip as there are so many of them. Thanks for your invite Keith, perhaps we can get together in the Spring.
Posted by John and Aileen on the road at 10:40 AM