GETTING TO THE END OF OUR TIME ON VANCOUVER ISLAND 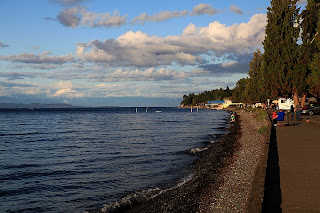 The beach at Qualicum Beach, BC 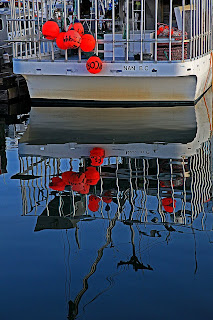 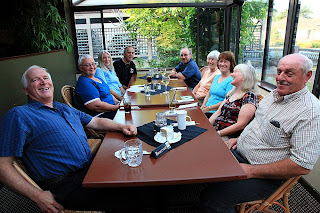 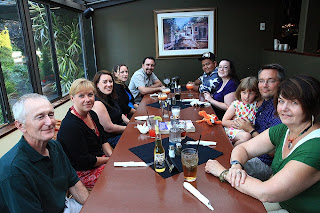 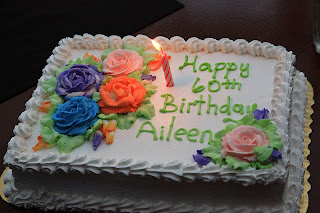 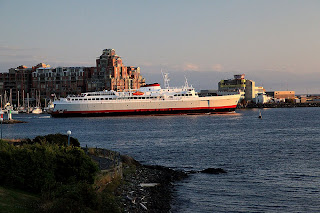 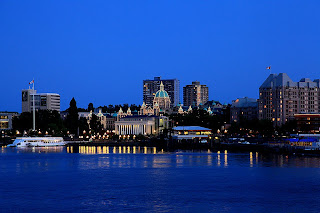 The BC legislative buildings are the domed ones 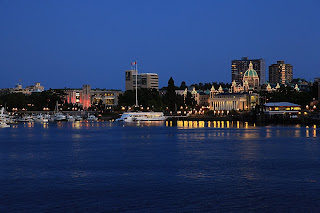 The building with the red glow is the BC Museum 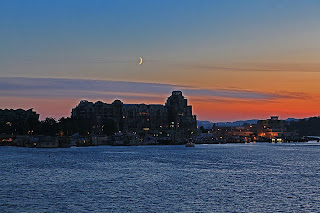 We did get to see all four people mentioned at the end of the last post and had really good visits too. It’s so nice to be able to visit friends, old and new as we travel around. We always meet new people along our journey’s path and most of them are so friendly. It’s not unusual to exchange email addresses with them and then share travel info or whatever.

We are set up in my brother Charlie’s yard again and enjoying the fruits of his and Sheila’s labour in the garden. They are away for awhile canoeing on the in north central BC. Just so you know Chas, the corn is great! It’s all ripe already so we are feeding the stalks to the cows as we finish the picking. I cut the front lawn today and nephew Logan did the back. The cows enjoyed the clippings, too.

We had quite a shower here yesterday. It gave everything a good soaking. We had gone to in the morning and left the vent over the bed wide open. Fortunately, we were home before the storm. We went to BCAA to make sure our travel insurance was adequate for our trip south and had to make some adjustments to it. It seems every time we go to BCAA and get a different agent, we get a different story (for more money!!). We will be checking out other companies next Spring. Friday evening we walked along the beach at Qualicum then peeked in at the to see the fish boats.

Richard, Robin and Georgia came up from this afternoon. They brought their big Golden Retriever, Ben, who had a ball playing with Chas’ lab, Belle. They ran and wrestled til they were ready to drop. Tonight is the belated surprise party for Aileen’s 6oth that Richard and my sister Janet have been planning for some time. I have had to make a lot of arbitrary decisions lately to make it happen though as Aileen has been doing everything possible to thwart the plans, it seems. I’ve been getting lots of flack over it too. Maybe I’ll be forgiven?

Well the party didn’t get off to a successful start; the waitress spoiled the surprise by asking if we were there for the party. Aileen wasn’t impressed with the idea! She did get over it after a bit and seemed to enjoy visiting with the family. Her sister Anne and John came from Port McNeill, the rest were my family from this area plus our son and his family from . After enjoying the restaurant meal, the cake and ice cream supplied by the organizers were brought in and enjoyed.

Yesterday morning we had a lazy breakfast then visited my parents in the care facility before taking Richard and Georgia down to . After dropping them at home, we went to a mall where I wandered a big book store and Aileen had an hour nap in the truck. Following that we picked up Aileen’s friend Bev and went for supper at Spinnakers which is close to the harbour in . Not only is Bev turning 60 today, she retires next Monday so lots to celebrate! After supper, I took my camera down to the shore for a few pictures including the MV Coho, the ferry we took to and from on our trip south last winter. Then we sat in the truck and pored over a map of that Bev had. She has been researching places to visit when she joins us in AZ in November. So now we’re all torqued up and waiting to get there! We drove to a better view of the inner harbour where I shot a few more images. After our good visit, we headed back to Errington just before 9PM. We had a fast trip home; about 2 hours, as the traffic was light and no laggards. Aileen managed to sleep for over half of the trip.

This morning saw some cleaning take place in the trailer as well as laundry. We’ll probably stay quiet here for a day or two then take the ferry to the mainland Wednesday or Thursday then back to Salmon Arm the following day. We have a long list of things to do before we head south about September 15.

Posted by John and Aileen on the road at 1:01 PM