MY PHOTO CONFERENCE IS OVER

Here it is Saturday and I’m rather glad to see the end of the conference in a way.  They have kept the hotel way cooler than needed; you shouldn’t have to wear a coat to the meeting rooms when it is in the 70’s F outside.  I seem to have come down with a head cold or infected sinuses which I will blame on the air conditioning.  My last tour the other day was to the Cheyenne Mountain Zoo.  While they have a large number of animals, getting a good shot proved impossible in many cases.  Sometimes the wire was to tight a mesh and often the glass was way too dirty to be able to shoot through.    Before getting out of the bus at the zoo, we drove past it up to the Will Roger’s Shrine of the Sun perched way up the hillside looking over the city and the prairie beyond.  I will share some of my zoo images next post.
Aileen did laundry on Monday.  Her gluten free bread made Sunday turned out very well and she has made another batch.  After I posted my blog Monday afternoon we went for the drive suggested by the guy I met in Manitou Springs.  We went up 26th St right beside our RV park here and followed Gold Trail Rd which turned into gravel later.  There were some pretty impressive drop offs and two old train tunnels to drive through.  I was pretty surprised to drive by Helen Hunt Falls which was to be part of my tour Tuesday!  I got my pictures as I imagined it would be difficult to get much Tuesday with the big group.  It is a tiny area to take pictures from and you have to shoot really tight to remove the ugly bridge from the image.  It was an excellent suggestion from that chap.  When I went with the group on Tuesday, I just went for a walk beyond the falls on the path and got considerably higher and saw some other scenery. 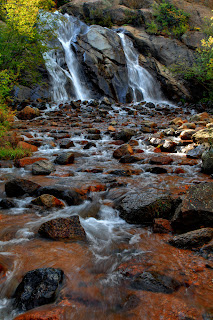 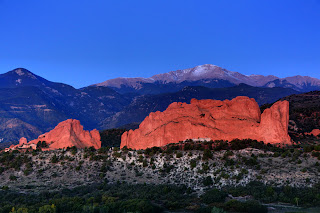 30 second exposure of Garden of the Gods and Pikes Peak.  It was pretty dark still 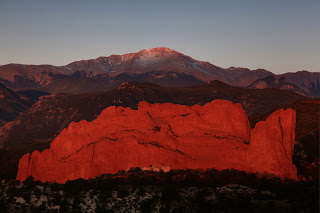 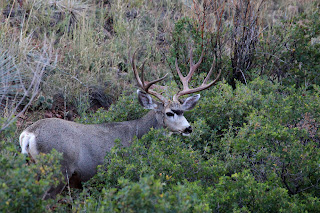 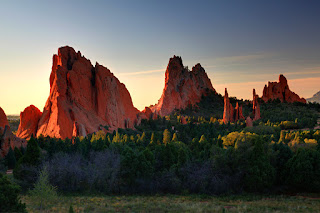 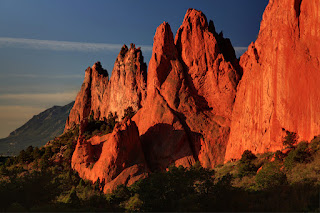 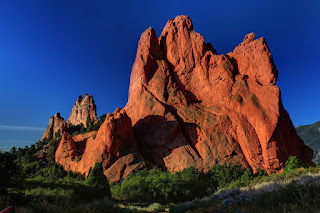 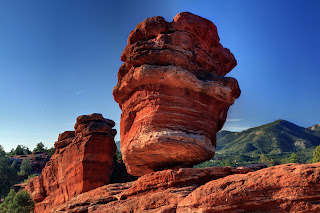 The balancing rock with no people in the scene.  You need to get there pretty early to beat the crowds.  The above were my Wednesday morning shots.

I brought my friend JP Bajaneree sp? home with me for supper on Tuesday and we had a good visit.  He and Aileen hit it off too.  I showed him some of my pictures and he thinks I should be presenting at future conferences.  It was nice to be complimented.  Later at the evening when we met people, he kept going on with the same thing.  I chummed around with JP while we were in Yellowstone for the conference two years ago.  He and his wife immigrated to Florida from India about eight years ago and he is very enthusiastic about his photography.  We were on all three tours together this year.
The next door neighbour woke me at 5 am Wednesday morning getting ready to leave for the day with his noisy diesel truck.  Mitzy didn’t like the noise either so was complaining.  I decided to get up about 6 and go up to the Garden of the Gods.  Well it was still dark when I got there and darn cold.  I fired off a 30 second exposure when I first got out.  I moved to the far end of the bank above the visitor’s center as it got lighter.  After a bit I could hear brush snapping and when it got a little lighter, I saw several bucks in a little patch of scrub brush below me.  I had to go to the car for my long lens and did get some good shots of a five point mule deer.
I’ve had a couple longer gaps between programs during the week so I was able to take Aileen shopping for groceries.  I made it home for lunch and supper nearly every day since Wednesday except for one lunch and one supper.  Thursday evening there was a social get together for all the attendees other than the US.  My friend Harbin from Vernon BC, one of the American members, a lady from Sydney, Australia and a lady from Jakarta, Indonesia were at my table and we had a great time visiting and discussing photography around the world and sharing bits of our lives.  The three evening programs Wednesday, Thursday and Friday were excellent with lots of good photos.
I have spent some time trying to lay out some kind of route for us over the next while.  I want to go to the Great Sand Dunes southwest of here since we may never get this far to the east again, then work up through the San Juan Mountains.  Not sure where from there but probably Grand Junction to visit our good friends Ken and Marie.  I think we’ll stay here another night so we can put some time into planning and perhaps some more pictures around here.  We went to the Garden of the Gods again tonight.  I wanted to see some different areas and boy did I ever.  I went to the Siamese Twins and then took an obscure trail since the main one was going the wrong direction.  I have this thing where I prefer to not return by the same way I went which often (as in tonight) makes for a longer and more difficult trip back to the car.  I’m very fortunate to have a very patient (usually) wife.  I ended up climbing to the top of the highest hill before finding a route down to the road again.  I ended up following a creek bed as the trail petered out.  One benefit of my detour was the opportunity to get those two twisted Juniper trees which I have included with this post. 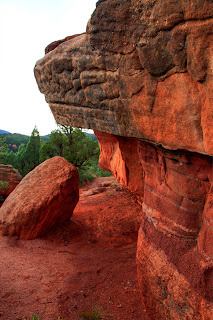 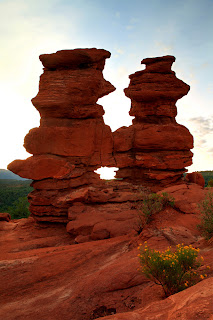 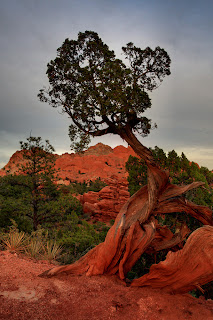 Twisted Juniper and part of the Garden 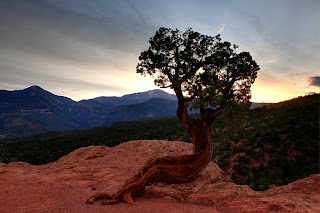 Another twisted Juniper with Pikes Peak 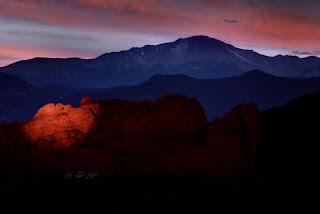 An after dark shot tonight with Pikes Peak in the background.  Some one is shining a spot light on the first Garden rock highlighting the so called Kissing Camels. 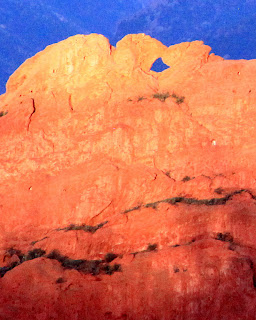 Close up of the Kissing Camels; they are at the top

Posted by John and Aileen on the road at 8:40 PM