HANGING OUT IN ERRINGTON 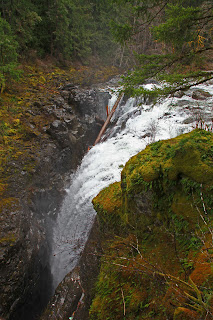 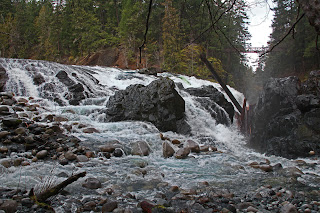 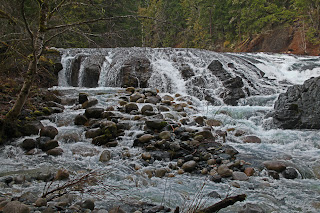 Another view further along the Upper Falls 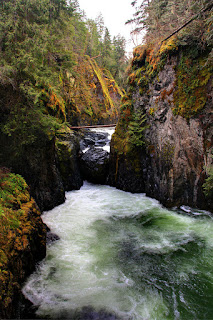 The site of the former Lower Falls 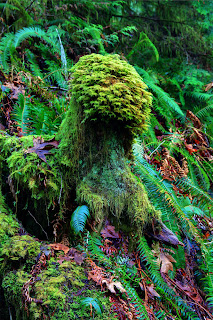 An old stump along the path

Today is shaping up to be one of our best days weather wise since coming to Vancouver Island.  Back to showers for the next several days again starting tomorrow though, so the forecast predicts.  We are starting to acclimatize to this weather I think.  We tried to burn one of the big brush piles out in the bush but it was too wet to get going, it will have to wait for some drying wind.
Work continues on preparing for Dad’s celebration of life on April 9th.  We had a meeting at Janet’s Tuesday night to discuss plans for dad’s service.  We had a good visit and even got a few ideas together.
I unwrapped my CanAm ATV Wednesday morning and it fired right up, the battery was still full of charge.  That was good to know.  I watched (custom travelling sawmill) Pierre with his Wood Mizer sawmill out behind Chas’ barn for a while.  What a slick rig.  Aileen did several loads of laundry in the house.  I went to town Wednesday and got our phone and internet plans upgraded.  I visited with my brother Sam on the way home and we wandered around the back of his place.  We played Mexican Train Wednesday night and at one point Aileen was nearly 200 points ahead but I pulled out an upset and won by 35.
On Friday morning we went to Bowser to visit people who were friends with Aileen’s cousin Gloria and Bill.  It was nice to finally meet Fred and Dagmar.  We missed them two years in a row down in Wellton, AZ.  Last year she was sick and didn’t go and of course when we were to have gone this year, I still was suffering from Valley Fever.  Gloria befriended Dagmar back in early school days in Qualicum Beach when Dagmar and her family emigrated from Europe and they remained close friends til Gloria’s passing.  We have heard of them for years but never managed to be in the same place at the same time.  We had a great visit with them and they seemed like long time friends.  Aileen and I played Mexican Train Friday night and she whomped me.  We’ve been alternating Train with SkipBo and although I may have won more games of SkipBo, Aileen is ahead on points.  Last night she double skunked me as I had 18 of my 30 cards left when she went out.  That’s second double skunk for me in a week!
The highlight of my Saturday was going to the Coombs Opera which featured old time fiddlers, country and blue grass performers and there were some very good performances.  Nearly four hours of music for $5, such a deal.
Sunday I had a different type of highlight (or was that low light?) when I discovered our toilet plugged.  Aileen lucked out by heading off to a workshop with Sheila which they both enjoyed.  I hooked up some hoses to the house pressure system and managed to blast it clear after a while.  We took the motor home away to the dump station later to start over again.  We have gone to Englishman River Falls Park twice for a walk around.  On Monday I started the final sort of Mom’s art work.  What a difficult chore as there were so many pieces and many were works in progress.  Sheila, Susan and Aileen came along at various times and got involved as well.  There was lots of reminiscing when we got into the photos, many of which were reference for her art.
Tomorrow we are going to Hornby Island for a couple of nights.  Our daughter in law’s sister Nancy and Brian have an interest in a B&B over there and will be having our grand daughter, Georgia, with them.  They invited us to come and share the visit which will be a first for us.  Hornby is a great place to visit and it is a super photo spot.  We used to go over there on day trips back in the mid 60’s when we were dating and have been there a few times over the years since.  It is not really conducive to taking the motor home over as there are two ferries involved ($$$$$$) and not much in the way of camping either.  We are trying to figure out what we need to take as it all has to fit in the car.  Mitzy will go with us but Sophie, the cat, will stay home and Chas and Sheila will check on her.
Posted by John and Aileen on the road at 10:42 AM