A yard full of cotton. Arizona had a record crop this year and prices are at record highs because of a worldwide shortage. There are a lot of happy farmers. 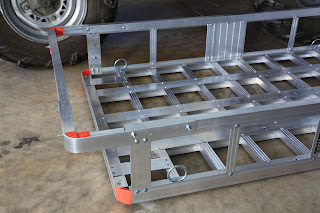 This the project I was working on a week or two ago. I extended the top rail as it was even with the bottom one. It will now allow the scooter to fit right in. 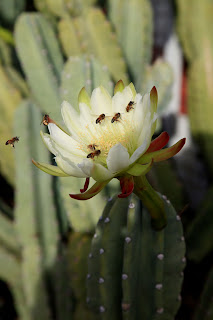 The bees really like this cactus. The flowers stayed out later in the day as it was cloudy. They disappear as soon as the sun hits the flower. 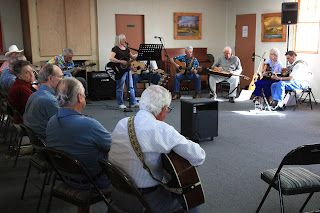 My sister Wendy at the mic at the Sunday jam session. 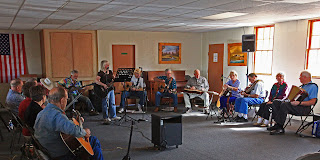 Wendy and all the other musicians and singers. 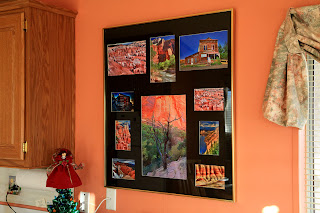 My latest project which took quite a few hours. I retrieved the frame including the glass from the garbage bin last year and have been thinking about what to do with it ever since. It is 30 x 33 inches. Notice how the colour of the rock in the large picture is the same as the wall.

I don’t know what Mitzy’s problem was but at 2:30 am last Thursday, she was pacing the hallway and making noises so I finally got up and took her to the dog park. At least the streets and dog park were quiet. She must have been hearing something because she still didn’t want to settle down. I went ATV riding with 16 others Thursday. We did almost the reverse of Blue’s ride on Tuesday except Eddie took us to see a couple of crown cactus below Box Canyon. There were a couple of slightly more challenging sections of trail near the cactus. It was t shirt weather from lunch on. Just great!!

Brian Knapp came by late morning and Aileen was able to talk to him about our latest idea (suggested by Bud) of moving the center pole out even with the others and he said no problem. He ordered the poles while still here and they should be ready to install next Thursday. We’ll see if he shows! If he’s coming for sure, I’ll stay home from ATVing. I went for the mail on my bike and ran into Ken Crutchfield there. He told me he’d seen a quad for sale the other day somewhere in so we went looking for it on our bikes. We didn’t see it anywhere so it has probably sold. They don’t seem to last if there’s a good deal.

We went to the River Bottom Grill with Ken and Char Mackley Thursday night and had a good supper. I ordered the fish and chips with shrimp and got four nice big plump breaded shrimp for 50 cents extra. Now that was a deal! We ordered a pitcher of Blue Moon since it was way cheaper (3 glasses would cost $12, the pitcher was over 4 glasses and cost $9.75!) and it went down well.

Char came and looked at my large prints on the way home then we rested awhile and met them at the pool later. We hope to do the River Bottom again with them this winter but there are hardly any more Thursday’s available. They go back to next week til after New Years, we head off to Quartzsite on January 20 or so for a couple weeks and they are off on the cruise January 25 then flying around til the end of February. We will likely be heading back to March 1st at the latest. We are 2/5 the way through our stay south of the border already.

I emailed back and forth with Glen and Irela Rhodes Wednesday and Thursday. They wanted us to come visit them, so at nine Friday morning we headed to to see them. Aileen drove us all the way. We had a good visit. Glen and I looked at the two 2008 racer quads and nice trailer to haul them he bought for $1400 and also went to an online auction yard close by. I brought home a business card for Jim to check out if he hasn’t bought one yet.

From there we went to Casa Grande planning to eat at Chili’s but it wasn’t where we thought it was so after driving around hungry for awhile, we went to the Golden Corral. We went to to check out their specials of which we bought some. The trick was getting through the checkout! It was very slow going. We came straight home from there so Aileen could get her nap.

Mitzy and I went to the dog park then ’s but they weren’t home so we checked the (empty) mail box. Proceeding from there we met Ken Mackley visiting Gene Moffatt. It seems they both worked for Swifts in at the same time years ago although they didn’t know each other then. Someone in the park who knows both of them made the connection.

We thought about rushing late down to the light parade in town but couldn’t summon up the ambition. Instead, we went to ’s for a few minutes to give Jim the link to some motor homes on auction. When we returned from there it was time to go to the pool which we had to ourselves.

I did the normal Saturday morning routine then went ATVing with 16 others. We went to 9 mile then to Cottonwood, up the pipe line to Highway 60 then lunch near After lunch Ed and 7 other retraced their route home while the other 9 of us went over the rough and rugged trail. Total distance was about 53 miles. Not too many pictures taken. There was no stopping in most of the rougher areas and no new territory for me.

Aileen went to Safeway, Fry’s and Walmart on the Saturday morning. I woke her from her nap when I got home about 3:30. We did three loads of laundry and visited with Bud and Arlene in their front yard. Dona Kobayashi stopped to chat too and now Aileen and I are doing some more typing for the Chatterbox. I have a key for gathering written submissions from the mailbox on the front counter at the clubhouse.

Sunday morning I did a batch of printing both 8 ½ x 11 and 5 x 7 for the project I have putting several prints in one mat in the 30 x 33 frame I picked up in the recycling last year. Later in the afternoon I got the mat marked out which entailed quite a bit of head scratching.

I had taken some more cactus pictures Sunday morning as it was overcast for awhile so the flowers stayed open. In the afternoon I took a few of Wendy performing at the jam session. I went for a ride around part of and most of Caliente after the jam. I picked up the Chatterbox items in the clubhouse in the morning and Aileen had them typed already in the afternoon. Wendy and Randy brought their Wizard card game over after supper and I pulled off a major upset in the final hand to win big. We all went to the pool later. We just missed Mackley’s and Mary.

Aileen went to the gym then the Monday announcements. She had a clown meeting right after. She helped the clowns pack bags of presents after lunch and now our car is full of them for Saturday. I spent much of my day getting the large window mat cut for the big frame then mounting all the pictures and getting it in the frame. It looks quite impressive hanging on the living room wall in the park model. I went to the cardboard recycling and brought home a huge piece which I was able to cut the required 29x30 inch piece out of.

I took Mitzy for a couple of walks. I went off on my bike a couple times. Once to buy tickets to the Duttons and the Canada Supper then to take a card over to Peg Downey (an ATV friend’s wife) who happened to be out of hospital already. She had compromised lungs then came down with Valley Fever. I carried on to ’s clubhouse for their newsletter. I rode to Vista Hermosa, up on the hill, then wandered my way home.

I printed a couple pictures for donating to the supper later in the afternoon. I plan to use the two frames I bought at the clubhouse garage sale recently for 50 cents each. Aileen got the news items finished up and sent off to Phyllis for the January Chatterbox. I saw that ’s had gone off to as planned.

Wendy and Randy went to L&B’s in for Mexican food Monday night then over to their house to see what it was like at night. They came to the pool later. Aileen and I stopped and talked to Carol (next door) and Marie at the laundry after leaving the pool.

Today I went ATVing with Blue and five others. It was a shorter than usual by a bit. We met at 7 mile gate then went up the big wash just to the left, finally coming out on We returned via nine mile.

Aileen went to the cookie exchange with . She brought back too many cookies so she made up trays for John and Carol, Bud and Arlene and a few for Randy and Wendy. We met Wendy and Randy at the pool again tonight. We had some problems with the internet tonight so I’m hoping it hangs in long enough to make this post.