We left Penticton on Wednesday  October 17th about 9 am.  Easy border crossing, just booze, tobacco and firearms were the questions this year.  The agricultural inspection guy came in and peeked in the fridge then bid us farewell.  We put on more miles per day than usual as our friends were having a party in Grand Junction that we wanted to attend so we did the trip in five days, four nights.  When we arrived, they had postponed the party until the Friday night!  It was 2243 kms (about 1402 miles) the route we travelled.  We spent nights in Osburn, ID, Bozeman, MT, Thermopolis, WY and Craig, CO.  Once we got into Wyoming, we were amazed at the abundant wildlife.  We saw hundreds of pronghorns and hundreds of deer.  Traffic was pretty light once we left the interstates behind and started heading south.
Our Colorado friends put on a nice welcoming party for us Sunday afternoon.  Ken & Marie, Ernie & Atha, Jim & Jane and Verne & Charlene all joined us at Jim & Judy’s where we are parked with full hookups for our stay.  We had a great time catching up with them.  Sunday evening we played progressive hand and foot with Jim & Judy then last night Jim & Jane joined the four of us for another couple of games.  Both nights the guys won one and then the ladies won the other.  Aileen has gone off with Marie this afternoon to play with a group of ladies.
In a queer co-incidence, when we came to Grand Junction two years ago, our Rand McNally RV GPS fried itself before we arrived.  On Saturday, while heading south for Grand Junction, the replacement Rand McNally RV GPS that I bought two years ago, died the same way.  Bizarre!  I have been looking for another GPS and it won’t be a Rand McNally!   We used the iPhone GPS function after the big one croaked and that was an adventure.  It decided to take us on a quicker route.  That was fine except it involved several miles of dusty washboard gravel.  So much for my motor home wash job!   Yes, the route was shorter but not faster after creeping along for several miles.
We had beautiful weather pretty much the whole trip.  We had a shower overnight and a couple more today.  The forecast is for improving weather the next few days but cooling off a bit.   It was lower to mid 70s F yesterday here.  I see Florence, AZ has been having cooler and damper weather lately so I hope that translates into a greener winter out in the desert.  We will be heading that way toward the end of this month, no date set yet. 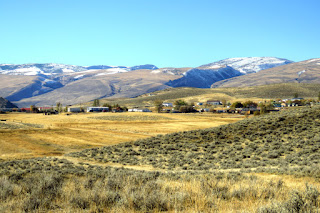 Near Lander, Wyoming with the Wind River Mtns 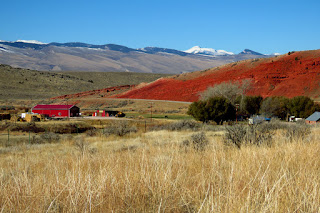 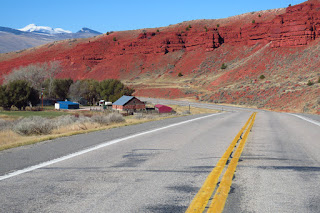 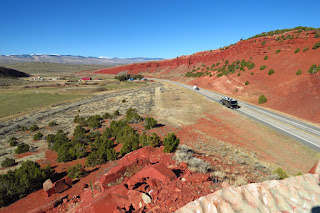 When I got back to the motor home, Aileen showed me the photo below she had taken of me with her iPhone whilst I was taking this image 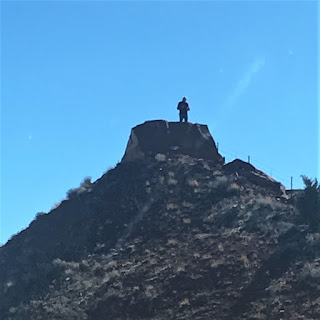 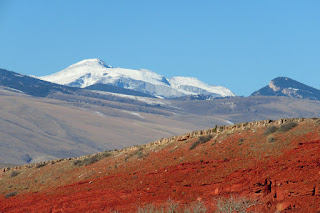 Last one near Lander 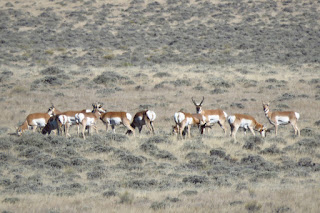 A few of the many pronghorns we saw 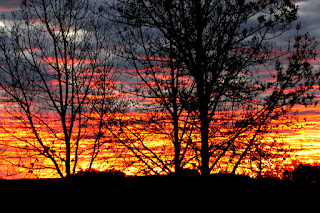 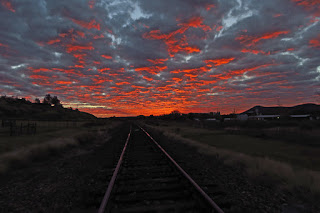 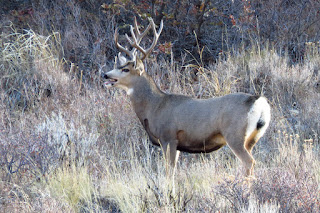 This big boy crossed in front of us while we were climbing up to a pass between Craig and Meeker, CO.  There was no traffic so I just stopped in the middle of the road to take a few shots. 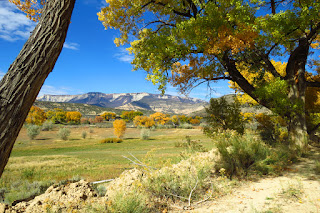 Posted by John and Aileen on the road at 4:10 PM